Among 20,000 commercial aircraft carrying passengers worldwide, approximately 1,000 (five percent) failed water safety tests in 2011, two years after publication of the Aircraft Drinking Water Rule (ADWR) by US EPA. That rule is specifically designed to ensure availability of safe water for air passengers and crew. Coliform bacteria are the primary culprits for aircraft water testing positive, in addition to biofilm and E. coli, which can cause serious illness in humans. One out of every 20 planes may not seem like a lot, unless one of those flights is yours. Water in onboard tanks is used for cooking, drinking and hygiene and tanks are refilled during stops at airports using local potable water. To be sure, 2011 test results are far better percentage-wise than tests conducted by The Wall Street Journal in November 2002, where high levels of bacteria and other contaminants were found in all 14 flights from various airlines and destinations. It also improves on a 2004 US EPA study in which 15 percent of the aircraft tested positive for total coliform bacteria. Nevertheless, that’s small comfort for risk-averse air travelers.

Traditional tank sanitizing for onboard potable water utilizes high concentrations of chlorine, and is typically done about every 60 days during routine aircraft maintenance. This method has several drawbacks. First, it requires high chlorine concentrations for the sanitation process: 100 ppm or more are dissolved into the water. By comparison, tap water usually has less than one ppm. Secondly, it’s a multi-step process: 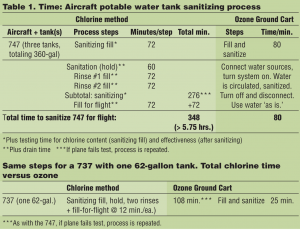 The third drawback is time (see Table 1). A Boeing 747, for example, has three 120-gallon (454.24-liter) tanks, totaling 360-gallons (1,363-liters). Fill time for Steps 1, 3 and 4 is 72 minutes each. Add the 60-minute ‘hold’ (step 2) and fill-for-flight (step 5) and it totals 348 minutes, over 5.75 hours. There’s also time for tank draining (three times), testing to ensure adequate chlorine concentration (first fill) and to ascertain microbe reduction after rinsing. High-water consumption during this sanitation process is another chlorine drawback, along with chemical handling hazards. On top of all this, the chlorine procedures do not always achieve the required sanitation standards.

Perhaps the greatest reason to look into other sanitation alternatives to chlorine is due to the failure rates that have been reported when using this method.

The sanitation standard, as described by US EPA’s Aircraft Drinking Water Rule is 99.0 percent disinfection—scientists call this a two-log reduction in microbes. Often, however, that bacteria (such as biofilm, a group of microorganisms that stick to each other forming a slime-like substance on a surface) can be found on the  interior walls of the holding tank and plumbing within the airplane. Unfortunately, chlorine is relatively ineffective in controlling the production of biofilm if present, as it cannot penetrate through the layers that build up on the walls over time (LeChevallier, M. et al. Journal AWWA, 87, 1990). When aircraft test positive for bacteria, these elaborate chlorine treatment procedures must be repeated until a passing grade is achieved, keeping planes on the ground (if it’s a 747) for 12 hours or more, which can be very costly for the airline.

Specially designed aerospace ozone technology targets bacteria in water to overcome these costly issues. A newly designed ozone system has been put into service, which achieves four-log coliform microbe reduction; i.e., a 99.99-percent kill of bugs including coliform bacteria, fecal coliform (E. coli) and heterotopic bacteria. Approved by the FAA (Federal Aviation Administration) and CE (Conformite Europeenne) and US EPAregistered, the self-contained, mobile system, which generates its own ozone onsite, can sanitize a 747 in less than one-fourth the time it takes with chlorine, and uses only one-fourth as much water in the process (see Table 1).

The aerospace systems dissolve precise ppm concentrations of ozone into the water, the water acting as a carrier of the ozone to sanitize tank interiors. Conversely to chlorine sanitation processes, ozone is very good in its attack on biofilm and other microbes. In studies, ozone has been proven to be effective in the removal of biofilms at 0.1 ppm (Water Quality Association, Ozone, 1997). The ozone-containing water is pumped into the plane’s tank, circulated and filtered, sanitizing the entire water system. The clean water then stays in the tank, to be used during flight. No chemicals are used and no wastewater requiring disposal is created in the process.

Besides time and labor, ozone saves 100 percent in chlorine/chlorine dioxide and wastewater disposal for both the 747 and 737. Savings in water usage add up, too (see Table 2). If microbe reduction is inadequate, repeating the process costs chlorine users another 1,080 and 186 gallons for a 747 and 737, respectively. 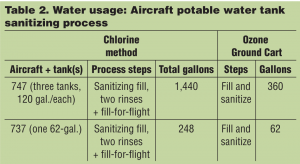 On-board ozone system purifies water in-flight
The only water tank sanitation while planes are airborne has come from sanitizing with chlorine during routine maintenance and/or residual oxidizer in the potable water with which the aircraft was refilled. Also, when chlorine is used to sanitize, aerators on faucets in the galleys and lavatories have to be replaced every maintenance period, due to heavy biofilm buildup and E. coli bacteria. An on-board ozone system addresses these concerns. Water with dissolved ozone is dispensed at each of the faucets to disinfect the entire water system. The process takes about 3.2 minutes. The system then operates for three minutes each hour, keeping tank water disinfected. Residual gaseous ozone present within the planes tank that is not consumed by contaminants within the water is available to further oxidize contaminants that may be present on the interior walls of the tank. The on-board system can be installed during major maintenance (usually done at 60-month intervals) or the system can be specified as a first-build inclusion. Along with FAA approval and US EPA registration, this system is also FDA-approved.

The applications and benefits of Nature’s strongest oxidizer continues to excel. Not only can ozone provide reduced chemical usage, water consumption and costs while increasing labor

The applications and benefits of Nature’s strongest oxidizer efficiency, but it can also provide greater sanitation and a solution to an on-going health threat while traveling the friendly skies.

Conclusion
Although ozone has been effectively used for water treatment for many years, multiple new applications are emerging and use of ozone is expanding. The efficacy and safety of water treatment in closed systems, such as aircraft, has been further evaluated and enhanced by the addition of ozone as a primary disinfection protocol to ensure the safety and health of the millions of passengers who take flight each year. As technology has advanced to new heights, so too has the need to explore additional markets that will benefit from new treatment options. 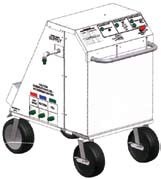 Marc DeBrum is a 16-year veteran of the water treatment industry, specializing in development and implementation of ozone-driven water purification and laundering applications with ClearWater Tech, LLC. Contact him at mdebrum@cwtozone.com

About the companies
ClearWater Tech, LLC is a leading designer and manufacturer of ozone-generation equipment for commercial laundries, swimming pools, spas, water features and a wide range of other water purification needs. The company has earned its industry-leading reputation through technical distinction in ozone generation applications since 1986. For over a quarter century it has marketed ozone products globally, with over 200,000 installations on six continents. For additional details, visit www.cwtozone.com

About the products
TheAeroproducts and Controlex family of pumps, valves and mechanical controls have been fielded on every major commercial and military airframe design over the past 30 years. These products are recognized as having the quality, engineering, design and proven performance necessary for continued success. The Ozone Ground Cart and On- board Ozone systems have been designed specifically for the aerospace industry to achieve the potable water sanitation goals required. They are engineered with ozone-resistant material and have passed rigorous testing by the Federal Aviation Administration and the Food and Drug Administration for both operation and function, and sanitation efficacy. The systems have been designed and tested to assure that sufficient levels of ozone are present in the water to assure sanitation of the water tanks and water delivery systems on aircraft. Additionally, they have been designed and tested to meet the ambient ozone levels requirements within the aircraft cabin. Both the cart and on-board system were used to test all the types of material that are present in the aircraft water delivery system. None of the materials tested were compromised during the test, which duplicated a five-year use of the systems. For additional details, visit www.aerocontrolex.com.