Representatives from Foundation Finance Company and 10 water treatment dealerships that won the company’s Foundation Fiesta competition were rewarded with a four-day trip to San Juan, Puerto Rico. The competition, which ran from February 1 through April 30, offered dealers several ways to qualify to win: overall funded volume, funding percentage and random chance based on earning entries for each loan funded. Winning dealers were treated to a variety of activities including golf, deep-sea fishing, catamaran sailing, snorkeling and tours of Old San Juan, the Bacardi rum factory and El Yunque Rainforest. 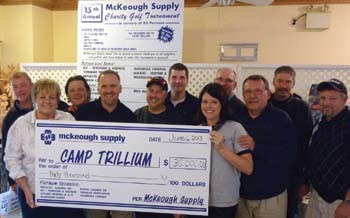 McKeough Supply held its 15th Annual Charity Golf Tournament in memory of friend and colleague Bill Porteous in June and raised $30,000 for Camp Trillium/Rainbow Lake. The donation will enable 38 families affected by childhood cancer to spend a week at camp, having fun being kids. McKeough Supply would like to thank its customers and vendors for their ongoing support of this annual event.

Global demand for membranes is projected to increase a healthy 9.2 percent annually to $25.7 billion (USD) in 2017. Rising environmental standards and regulations in many parts of the world and high population growth, particularly in water-stressed areas, will further drive investment in membrane-based water and wastewater treatment systems. Increased attention paid to food and beverage safety regulations, and rising interest in water reuse and material reclamation will also propel membrane sales. These and other trends are presented in World Membrane Separation Technologies, a new study from The Freedonia Group, Inc. In another report, CEO 360 Degree Perspective on the Global Membrane-based Water and Wastewater Treatment Market, an analysis from Frost & Sullivan, Asia-Pacific, the Americas and Europe are expected to maintain their strong market position. Asia-Pacific, in particular, will see substantial growth fueled by dynamic industrialization and population increase. The research finds the market earned revenue of $5.54 billion in 2012 and estimates this to reach $12.07 billion in 2020.

Specialty chemicals company LANXESS increased prices for its Lewatit ion exchange resins by three to five percent as of July 1. The specific adjustment will depend on resin grade and region. In mid-June, the company received the Supplier Award in the category Raw Materials from BRITA GmbH, one of the leading drinking water optimization companies. The awards, which also included the categories Components and Packaging, were presented for the first time in 2013. One decisive factor for choosing the global supplier of Lewatit ion exchange resins was its excellent performance in the annual BRITA supplier evalua- tion, where LANXESS achieved an impressive 88.1 percent, far outstripping the average of 76.4 percent.

HaloSource expanded distribution agreement announced HaloSource, Inc. announced a further expansion of its strategy to drive market presence for its HaloPure water purification technology through strategic partnering with major, branded consumer product companies. HaloSource has been chosen as the exclusive supplier of gravity-based disinfecting water pitchers in five Latin American countries, as part of an exclusive distribution contract with a major Fortune 500 consumer products company. The two companies came together through a mutual partnership with H2O International, Inc., facilitated by founder Guillermo Guzman. With more than 20 years in the water purification industry, Guzman saw a perfect fit for HaloPure’s drinking water disinfection technology in his partner organization’s product offering as part of their initial entry into the burgeoning global water purification market.

IAPMO R&T Lab has been recognized by Mexico’s Entidad Mexicana de Acreditacion, A.C. (EMA) for testing of several categories of plumbing products and is now accredited to test water closets, flushometer valves, fill and flush valves and shower heads for certification in Mexico. EMA is the premiere non-governmental body in Mexico for accreditation of testing laboratories and certification bodies. Also, the lab is ACLASS- accredited to ISO/IEC 17025 and is capable of testing to more than 400 standards and providing such special services as research and development, quality assurance, failure analysis and witness/ field testing. As new standards develop in Mexico, the lab will expand its testing capabilities accordingly. In addition to Mexico, IAPMO R&T Lab offers one-stop testing for fast-track listing of products in the US, Canadian and Australian markets. With state-of-the-art testing facilities in Ontario, CA, IAPMO R&T Lab is prepared to test the products of manufacturers from around the world so they can bring their products quickly to market throughout North America.

Severn Trent Services partnered with humanitarian organiza- tion Operation Blessing International (OBI) to install and com- mission a ClorTec® T-6 Series sodium hypochlorite generation disinfection system for the Hôpital Universitaire de Mirebalais in Mirebalais, Haiti. The system is capable of producing six pounds of sodium hypochlorite per day, which can disinfect up to 165,000 gallons (624,592.9 liters) of water daily for the hospital. The recently completed 300-bed teaching hospital will provide primary care services to about 185,000 people and secondary and tertiary care to all of central Haiti and areas in and around Port-au-Prince.

GE announced the results from a consumer water reuse survey, conducted by GE in partnership with StrategyOne. Based on 3,000 on-line interviews, the water reuse survey examined consumer attitudes in China, Singapore and the US. The survey provided a comprehensive look at how residents of each country view water reuse and their willingness to support the protection and recycling of water. The findings indicate that Chinese residents are the most supportive of water reuse, compared to their counterparts in the US and Singapore, and demonstrated the highest knowledge about water infra-structure issues. 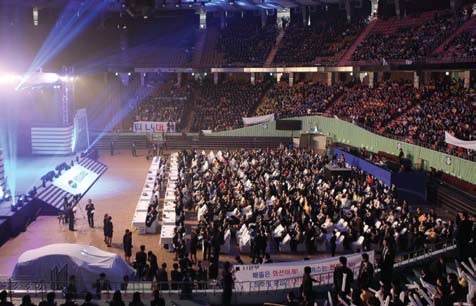 ChungHo Group, parent company of Micro Filter Co. and MCM Co., LTD celebrated the company’s 20th anniversary at a ceremony held in May at the 1988 Seoul Olympic gymnasium in Korea. ChungHo Group’s entire staff gathered together to announce the company’s future vision and goal of achieving total revenue of $20 billion by the year 2020, and to dominate the market in Korea.