By Henry Nowicki, PhD and MBA

TCN values correlate directly with AC aqueous MTBE removal from drinking water, but iodine numbers do not. Published test procedures to determine iodine activity numbers of activated carbons produce results that do not correlate with field studies for targeted small-molecule removal from drinking water. Tetrafluoromethane (TFM) activity or TCN is the ratio (g/100 cc of activated carbon) mass of TFM adsorbed by a volume of activated carbon sample when the carbon is saturated with TFM under conditions of this test method. An activated carbon bed of known volume and mass is saturated with TFM vapor. The mass adsorbed at saturation is measured and reported as mass of TFM per unit volume of carbon. 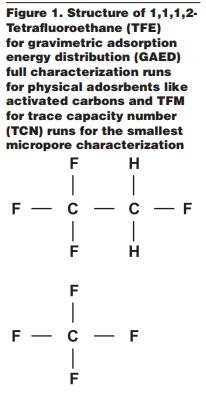 Trace capacity number comparison
GAED determines pore sizes or adsorption spaces and their corresponding adsorption energy distribution—from the largest to the smallest adsorption spaces—but GAED equipment is relatively complex and expensive. The terms pore and adsorption space are used interchangeably. The method provides the characteristic curve, which can be described by its polynomial equation, to yield isotherms for compounds of interest at any temperatures desired.1 Isotherms provide the most important information, including estimate of carbon-use rate. GAED also provides pore size distribution, BET surface area, thermogravimetric analysis, trace- and mid-capacity numbers for the tested sample. The TCN method uses relatively low-cost, readily available equipment compared to GAED. The equipment setup is accepted to provide ASTM International butane and carbon tetrachloride activity numbers2 (see Figures 2 and 3). These two activity numbers (g/100 g C or g/100 cc carbon) are obtained by passing saturated method gas through a known mass and volume of sample using standard methods. These gases fill up most of the samples’ total pore volume. TCN activity (g/100 cc) values are lower than butane activity; only the smallest adsorption spaces with the highest adsorption energy (HAE) are capable of physical adsorption of TFM. Laboratory sample preparation techniques to increase TCN resolution have been incorporated to deal with relatively low mass TFM loadings on activated carbons. Accurate TCN activity values depend on these HAE pore spaces’ cleanliness: no adsorbates present, water or concentrated air in the HAE pores. Activated carbons can concentrate ambient atmosphere air about seven fold in these highest adsorption energy pores. Water loading needs to be less than 0.1 wt percent, and these pores need to be empty of adsorbates, including concentrated air and char, when the pre-weighed sample tube is re-weighed with the sample (see Figure 3). This necessary sample conditioning is accomplished by weighing the sample warm (while the sample is over 70°C) when filling the sample tube (see Figure 3).

Granular activated carbon (GAC) TCN values are about five to 10 times smaller than butane activity values. These comparative values are preliminary and need more industry collaborative evaluations. Standard ASTM International butane activity runs flow butane in a bottom-to-top flow (see Figure 3). But, for TCN runs, flowing TFM needs to be reversed (top-to-bottom) and this flow uses the fritted disk or equivalent in the bottom of the sample tube to contain any carbon dust. With the relatively small TFM loading mass, not losing any GAC sample mass is important to ensure accurate TCN values. It is also important to tightly pack the activated carbon sample into the sample tube; a vibrating plate is used as described in ASTM Method D 2854 to accomplish proper packing.

It is important to know that popular physical adsorption specifications, iodine number and BET surface area, have little relevance to activated carbon adsorption performance for small molecule applications. Most of the iodine and surface area value (mg/g and m2/g respectively) is derived from irrelevant larger pore sizes not needed for small molecule adsorptive applications. The TCN test method has more relevant specificity compared to iodine and surface area values, because TCN only evaluates the pore sizes needed for these applications. 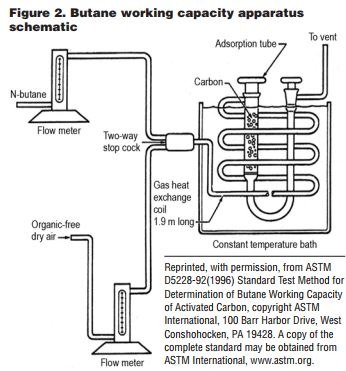 In aqueous applications, it is very important to ensure complete wetting of GAC porous structures. The smaller the pore, the harder it is to wet, because it has compressed air that must be displaced with water. The small micropores contain seven atmospheres of air pressure above ambient. Incomplete wetting is the most common reason for carbon not working.4 Aqueous adsorbates must diffuse from bulk water to active adsorption sites with 1- to 5-nm wall-to-wall graphitic platelet adsorption spaces or pores. To ensure complete micropore wetting it is recommended that GAC is soaked in water for 72 hours with several draining and refills before field use to ensure complete wetting.4 Hot-water wetting decreases the amount of time needed. Properly wetted activated carbon instead of dry can also be purchased, which allows the carbon to be used immediately in the field. Once compressed air bubbles are formed in the bowels of carbon particles, trapped compressed air can stabilize for a long period of time, even years, which effectively eliminates their needed adsorption spaces and results in premature adsorbate breakthrough. If a significant portion of a GAC column has trapped compressed air, water flows around the collective air bubble. If the GAC has a high TCN value, but field operations do not properly wet the GAC, it will not perform to its potential small-molecule capability.

MTBE and its unintended consequences
MTBE was added to gasoline as a fuel additive to improve air quality compared to hydrocarbons. It has, however, contaminated significant groundwater drinking water sources, due to being very water soluble and to the fact that it migrates relatively quickly from underground leaks from storage tanks. It has a bad taste and odor in drinking water at low trace concentrations and thus needs to be removed. GAC removes MTBE, but its performance lot-tolot or vendor-to-vendor is not predictable using iodine or butane numbers. Iodine numbers do not predict MTBE loading capacity for GAC supplies, but TCNs do correlate (see Table 1). Iodine fills a wide spectrum of adsorption spaces, but tetrafluoromethane is only taken up by small, high-adsorption energy-adsorption spaces, which are also needed by small water-soluble molecules. Thus, iodine is best used as a performance predictor when the real-world application fills up the total pore volume. TCN is more appropriate for specific applications that selectively need only small HAE adsorption spaces. 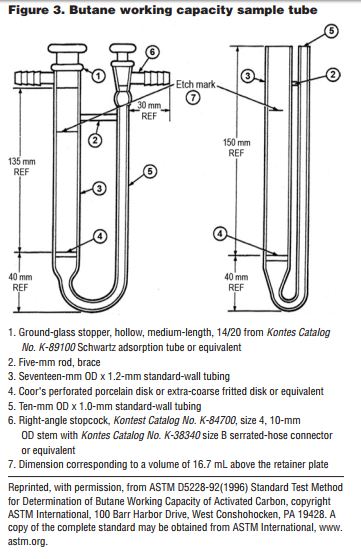 Comparison of TCN and iodine numbers
Trace levels of aqueous MTBE adsorption are unpredictable for commercial activated carbons based on iodine numbers, because MTBE is very water soluble and present at low ppb concentrations. The more water soluble a potential GAC adsorbate is, the more difficult it is to adsorb, and its loading capacity is lower. The closer the adsorbate is to saturated concentration, the higher the GAC loading; above saturation results in two phases of liquids. GAC has a low and variable MTBE removal capacity when compared to iodine, but loading capacity is more predictable when TCN is used as the correlation with MTBE removals from water. Results of this comparative evaluation are shown in Table 1 for several activated carbon samples. This data set tells us that TCN values increase with MTBE loading or capacity and the iodine number does not correlate with MTBE loading.

Table 1 shows that different activated carbon samples TCN correlates directly with MTBE removal from clean water. It also clearly shows that the iodine number has no correlation with MTBE removal performance. This trace capacity number test method is expected to be most useful for drinking water from groundwater supply sources. Surface water sources tend to have more organic contaminants and thus we expect competition for the limited number of high-adsorption energy sites. HAE sites are required for physical adsorption of small water-soluble organic compounds, like MTBE, THM, vinyl chloride and others. Since about half of US drinking water sources are groundwater supplies, TCN should be useful. Surface waters with higher natural organic matter could use regular GAC to protect high-TCN special carbon using consecutive, separated GAC beds. Carbon has long been used to protect membranes against organic fouling and oxidants, such as chlorine, ozone and hydrogen peroxide. 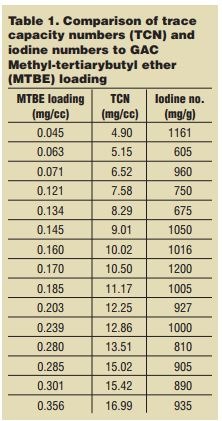 Discussion
Accurate test methods to predict activated carbon’s specific application performance are critical for activated carbon users and manufacturers to select the best carbon. Activated carbon has an amazingly long list of applications, but all carbons are not the same. A carbon which lasts two to three times longer than a competitor carbon in a given application is more useful than a carbon that experiences earlier breakthrough. Early GAC breakthrough results in repurchase of unused carbon and change-out of spent used carbon and its disposal. Breakthrough is the first appearance in the effluent of a specific concentration of an adsorbate. The mass transfer zone is the part of the carbon column where the concentration of the adsorbants in the water decreases from influent to the lowest detectable concentration. The mass transfer zone needs to be contained in the column.

MTBE-used GAC more likely than not still has a good iodine number, when the TCN HAE sites have been consumed and the MTBE-filled micropores are not available to provide more needed MTBE physical adsorption. Relatively lightly used carbon can be reactivated for many uses or for municipal wastewater plants to polish the wastewater. Presently, these plants do not provide significant tertiary treatment with activated carbon, yet effluents are well known to contain deleterious organic compounds that could be removed very well with activated carbon.(1)

Physical adsorption of solvents out of water is enhanced liquidfaction; i.e., the adsorbate comes out of water as a liquidlike state in micropores well before it is concentrated to saturation. Adsorbates are concentrated in specific adsorption spaces by London force fields from graphitic platelets.5 Polarizability of adsorbates determines how well they come out of water as liquid or solids and is a direct reflection of refractive index. Liquids pack well in available adsorption spaces that have needed minimum adsorption energy values. But solids may not pack well because they have void spaces when packed, especially in nm spaces.

About the author
Henry Nowicki, PhD, MBA is PACS President and Senior Scientist. He has been awarded nine government SBIR contracts for R&D on new activated carbon products and services over 1,000 industrial and municipal clients on activated carbon issues. Nowicki provides the introductory course for PACS Activated Carbon School titled “Activated Carbon Adsorption: Principles, Practices, and Opportunities.” He also has been an expert witness for environmental, safety and activated carbon cases. Nowicki serves on WC&P’s Technical Review Committee, the editorial review committee of International Filtration News and is technical chairperson for the annual International Activated Carbon Conference. He can be reached at (724) 457-6576 or www.pacslabs.com or e-mail Henry@pacslabs.com.