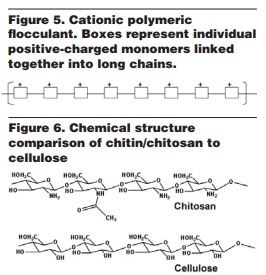 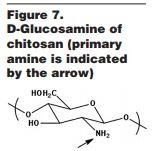 Chitosan structurally similar to cellulose
Interestingly, chitin/chitosan is structurally similar to cellulose with the difference being that cellulose is comprised of D-glucose sugars linked together β-1,4 to form the homopolymeric chains. In chitosan, the heteropolymeric chains are instead comprised of D-glucosamine and N-acetyl-Dglucosamine linked β-1,4 (see Figure 6). The primary functional moiety attributed to chitosan’s potent flocculation activity is the primary amine as shown in Figure 7. Chitosan’s primary amines become protonated and positively charged as a function of pH. Protonation of chitosan’s primary amines occurs over a pH range and the degree of charge (charge density) of the biopolymer is driven by pH. This is illustrated by the schematic in Figure 8 depicting the biopolymer chitosan composed of primary amines and N-acetylated amines (NAC).

The effect of pH on cationic charge is one major distinguishing feature of chitosan over synthetic cationic polymers whose permanent strongly positive charges are contributed by quaternary amines/quaternary ammonium salts, which are independent of pH, as shown in the schematic in Figure 9. Quaternary amines are strongly basic and strongly cationic and are therefore, essentially permanently positively charged independent of pH. The positive charge of the protonated primary amine in chitosan is weak compared to the strong charge of the quaternary amine in a typical polyDADMAC or a polyacrylamide copolymer of acrylamide and DADMAC (cationic PAM). This difference in charge strength is due to a fundamental difference in basicity between these two types of amines. The strongly basic properties of quaternary amines present in synthetic cationic polymers may explain the higher toxicities observed with these kinds of synthetic polymers, compared to the weakly basic primary amine-containing natural polysaccharide biopolymer chitosan. 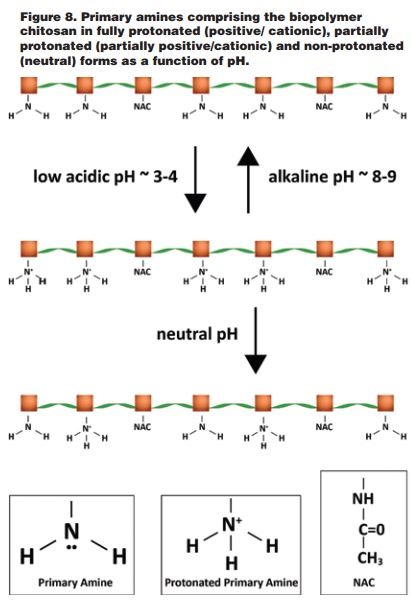 The solubility of chitosan is a function of the overall positive charge, which is influenced by pH. The percent of protonated primary amines contained within the chitosan polymer chains (driven by pH) drives the solubility of chitosan in aqueous environments. As the percentage of protonated amines is reduced by increasing pH, chitosan polymers become insoluble because the cationic charge is insufficient to maintain complete solubility of the polymer chains. Despite solubility limitations, chitosan has been shown to exhibit optimal flocculation efficiency of suspensions of river silt and kaolinite at a neutral pH between 7.0 and 7.5.11,12 The flocculation efficiency of chitosan on colloidal clay particles at neutral pH suggests that charge neutralization is not the primary mechanism responsible, and that bridging interactions and molecular weight seem to play a more dominant role.13,14 Since the percent of primary amines, which is a direct result of the degree of deacetylation (charge density), and the molecular weight of chitosan can be controlled during processing and production, this makes chitosan an ideal polymer for a variety of flocculation applications.3 In addition to the charged primary amines that contribute to chitosan’s flocculation properties, other functional groups (such as the hydroxy, acetyl and acetamide) may, through hydrogen bonding interactions, play a role as well. Hydrophobic interactions may also contribute to floc formation as observed with synthetic cationic polyelectrolytes.15

Cellulose is the most abundant polysaccharide biopolymer known. It provides structural integrity to the cell walls of plant and algae. Chitin performs a similar role in some organisms of the kingdom Animalia and the organisms of the kingdom Fungi.16 For example, the exoskeletons of crab, lobster, shrimp, insects and the internal skeleton of squids are composed of chitin. Chitin is ubiquitous in the cell walls of fungi often found in a complex with other polysaccharides, such as glucans. Chitosan is quite abundant in some species of fungal cell walls and is extractable in aqueous acid solutions. Despite the abundance of chitin in the ecosphere, it does not build up in overwhelming amounts due its biodegradability. Chitin/chitosan is naturally degraded by enzymatic activity common to plants, animals and microorganisms and is recycled or assimilated back into the environment.17

Because of chitosan’s functional properties, it is used in a variety of applications, including water treatment, textile coatings, biomedical wound dressings, dietary supplements and in agricultural applications as a seed coating and a foliar treatment in plants.17,18 In addition, chitosan has been approved by the American Association of Feed Chemists as a livestock feed additive.19 Chitosan has a long history of use in agriculture.17,20 Based on the nontoxic nature of the biopolymer, an exemption from the requirement of a tolerance for residues of chitosan was granted by US EPA.21

Chitosan’s use in water treatment has been most notable as a natural clarifier. The discovery of its flocculation activity was first described by E. Lee Johnson using water from a mud puddle obtained from an unpaved alley in rainy Seattle, WA during the late 60s. This finding subsequently led to US Patent 3,533,940 titled Method for Treating an Aqueous Medium with Chitosan and Derivatives of Chitin to Remove an Impurity issued on October 13, 1970 to Quintin P. Peniston and Edwin Lee Johnson, pioneers in the first commercialization of chitin and chitosan from waste shells of crab and shrimp. Since then, chitosan has found its way into numerous commercial applications involved in water treatment. Because of chitosan’s unique oil-binding properties in the presence of chlorine, it has long been used as the active ingredient in a product that very effectively maintains water clarity in swimming pools, spas and recreational water parks. Flocculation and removal of oils and sunscreen ingredients to the filter prevents the formation of scum lines on the walls of pools and spas. Chitosan, either alone or in combination with other flocculants or coagulants, has been shown to be quite effective in reducing suspended solids from a variety of food processing waste streams22,23 and is used as a food and feed additive in Japan.17

As a flocculant, chitosan has been shown to treat a wide variety of water effluents, including brewery, seafood, fish and milk-processing wastewater. The metal chelating activity of chitosan has been attributed to the configuration of its nitrogen and oxygen electrons and it is known to remove a variety of metal ions from water.3 In combination with a coagulant aid (such as bentonite clay), Murcott demonstrated that chitosan could enhance coagulation and improve color of water used for producing drinking water.24 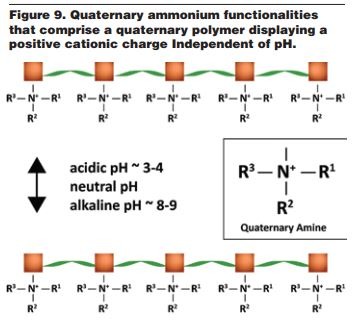 Chitosan biodegradation
Degradation of the natural biopolymer chitin/ chitosan is well established.25,26 Both chitin and chitosan are naturally abundant biopolymers that are degraded and recycled back into the ecosphere.17 A number of microorganisms utilize chitin and its degradation products as nutrients and an energy source.25,27 The degradation mechanisms are primarily enzymatic and due to a variety of specific enzymes produced by plants, microorganisms and animals. The degradation pathways have been reviewed by Davis and Eveleigh.28 Chitinases degrade chitin to chitin oligosaccharides, which are further degraded to the sugar monomer N-acetyl-Dglucosamine. This sugar is utilized in a variety of biosynthetic reactions needed to sustain life, including regeneration of chitin. Chitin can also be deacetylated to chitosan by chitin deacetylases, which can be further degraded to chitosan oligomers and finally, the sugar glucosamine by chitosanases and glucosamidases, respectively. Glucosamine monomers can be deaminated by deaminases to the common sugar glucose or phosphorylated by hexokinases and utilized in energy production or biosynthetic reactions common to living organisms, including plants. The biodegradation products of the biopolymer chitosan are sugars common to a variety of animals, plants and microorganisms which renders them safe and natural. Biodegradation rates of chitin/chitosan have been studied in different marine and estuarine environments, freshwater lakes and soil, as reviewed by Gooday.25

Summary
The use of cationic polymers for water clarification is highly effective in reducing suspended solids and turbidity in a variety of aqueous systems. Although a variety of cationic flocculants are available for use, the only natural cationic flocculant commercially available is chitosan, which is derived from the exoskeletons on crabs, shrimp and lobster as a byproduct of the shellfish industry. The cationic charge of both synthetic and the natural biopolymer chitosan is attributed to a nitrogen derivative; not all nitrogen derivatives exhibit the same type of cationicity. The positive cationic charge of synthetic cationic polymers is typically due to secondary, tertiary or quaternary ammonium functionalities. This is in contrast to the positive charge of the natural biopolymer chitosan, which is due to weaker primary amines. Cationic PAMS and polyDADMAC are synthetic quaternary amine/ammonium containing polymers whose positive charge is permanent and independent of pH compared to the primary amines of chitosan. The difference in charge strength can exhibit a different level of toxicity with quaternary amines ranking higher compared to primary amines. Quaternary amines are strongly biocidal and used in a number of products as sanitizers or disinfectants. Synthetic cationic polymers, such as cationic PAMS as well as both neutral and anionic PAMS, contain residual unreacted acrylamide, which is a potent neurotoxin and has been shown to be toxic to aquatic invertebrates. Although both the synthetic PAMS and natural biopolymer chitosan are degradable, the degradation products of chitosan are known and identified as common, natural sugars that are recycled back into the ecosphere as part of the natural carbon/nitrogen cycle.

About the author
Dr. Everett Nichols is Scientific Director of Water Treatment Technologies for HaloSource Inc. He received his BS Degree in bacteriology and public health from Washington State University and his MS Degree in public health and PhD from the University of Washington, specializing in pathobiology and the biochemisty of complex carbohydrates. He has over 28 years of experience working with natural carbohydrate biopolymers and complex oligosaccharides, including both chitin and chitosan. Nichols has directed and participated in the discovery, development and commercial launch of a variety of products, many of which are chitosan based and are used in recreational, industrial, storm and aquaria water applications. He provides a technical and strategic perspective to the solution of complex problems and also manages HaloSource’s intellectual property portfolio, which consists of more than 100 patents and pending patent applications.

About the company
HaloSource (www.halosource.com) is a global, clean water technology company headquartered in Bothell, WA. The company designs solutions to protect people, preserve the planet and celebrate our most valuable resource: water that is safer, cleaner and more accessible for people everywhere.