An Emerging Standard for Emerging Compounds and Incidental Contaminants

Water Conditioning & Purification March 2013 Water Matters By Rick Andrew I n recent years, a number of scientific studies have identified traces of a variety of contaminants in source water and drinking water that had not been previously detected. These studies, possible in large part due to improved capabilities in analytical detection, have caught the attention of the media and consequently, the attention of health-conscious consumers as well. The compounds, some of which are potentially endocrine-disrupting compounds, are related to pharmaceuticals, personal-care products and other sources that have made their way into source water and drinking water, typically through wastewater. A question that logically follows the detection of these compounds in drinking water and the consumer focus on the issue is whether POU/POE technology will be effective for treatment. This question was brought to the NSF Joint Committee on Drinking Water Treatment Units in 2008.

Task group formed
In response to this issue, the joint committee formed the DWTU Task Group on Endocrine Disrupting Chemicals (EDCs) and Pharmaceutical and Personal Care Products (PPCPs) in mid- 2008. This task group reviewed and assessed the scientific work done in the area as they educated themselves to address it in a technically sound, fact-based manner. Their ultimate goal was to develop a standard to evaluate the capability of POU/POE equipment to treat these compounds at the concentrations being detected in drinking water. The effort became complex for several reasons as the group considered the following issues:

The simplest, most understandable consumer-friendly claims would be based on broad categories of compounds, such as reduction of pharmaceuticals. This approach avoids potential confusion, such as the name of the compounds compared to how consumers might identify them. Pharmaceuticals, however, covers a huge number of different compounds. One possibility might be to identify specific compounds that could be tested to be representative of broad categories, much like chloroform is used to cover the broad category of volatile organic compounds under NSF/ANSI 53 and NSF/ANSI 58. The complexity with this approach is that many of these compounds are chemically very different from each other, with different properties in water, and would likely react differently to treatment technologies. Additionally, only certain compounds have actually been detected in drinking water. These compounds are also very different in terms of physical activity, or the amount of the compound necessary to cause a physiological reaction.

The type of claims to be made—health effects, aesthetic effects or other

The ability to conduct testing in the laboratory

Obviously, addressing these complex issues requires technical expertise to achieve a common understanding. The task group utilized expertise from the manufacturing, regulatory, academic and analytical chemistry communities to reach the point where their shared knowledge allowed them to reach a common understanding. The result for the task group was the following guidelines supporting their approach to the standard:

These guidelines allowed the task group to move forward and develop a draft of Standard NSF 401. The contaminant reduction claims, influent challenge concentrations and maximum allowable effluent concentrations currently included in the draft are included in Figure 1. Please also note that the material safety and structural integrity requirements of NSF 401 are adopted directly from NSF/ANSI 42 and NSF/ANSI 53. 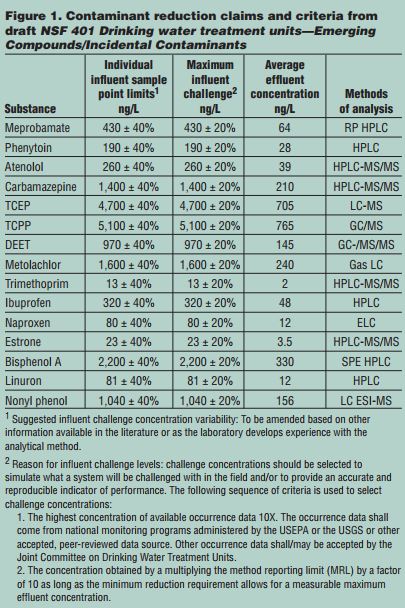 Current status
On January 28, the draft was submitted to the NSF Joint Committee for balloting and that period remained open until February 19. Once the ballot period ended, any comments received from joint committee members were considered and adjudicated. Changes to the criteria and requirements of NSF 401 may have occurred in this process. Additionally, laboratory validation testing will have to be completed to assure the testing as specified can be accurately repeated and reproduced. Although significant lab work has already gone into the development process, it is important to conduct the entire tests to assure validity of the standard.

Finally, the standard must be approved by NSF’s Council of Public Health Consultants, an independent group tasked with ensuring that NSF’s standards and policies are consistent with NSF’s mission to protect and improve human health. Ultimately, because it was developed through an accredited consensus process, the standard will also become an American National Standard through ANSI.

About the author
Rick Andrew is NSF’s Director of Global Business Development-Water Systems. Previously, he served as General Manager of NSF’s Drinking Water Treatment Units (POU/ POE), ERS (Protocols) and Biosafety Cabinetry Programs. Andrew has a Bachelor’s Degree in chemistry and an MBA from the University of Michigan. He can be reached at (800) NSF-MARK or email: Andrew@nsf.org