Water treatment today almost always involves solid and liquid separation processes that utilize a combination of chemical and physical treatment methods to improve water quality. The chemical processes of coagulation and flocculation play a significant role in removing the vast quantities of contaminating particulates that are often present. This chemical process is typically referred to as water clarification. 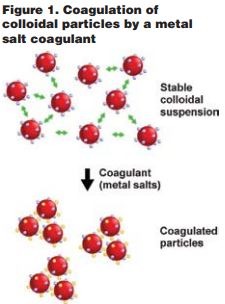 Water clarification
Water clarification is the removal of fine suspended matter from water. It is common to a wide range of treatment applications, including potable water, industrial and municipal wastewater, environmental remediation, construction stormwater, mining operations, aquaculture, dredging and hydraulic fracturing in oil and gas operations.

Suspended matter affects water clarity by creating cloudy or murky water, which is often referred to as turbidity. Water clarity or turbidity is quantifiable based on the measurement of scattered light using a nephelometer. The turbidity results from a dispersion of suspended particulates. The removal of these particulates by filtration is primarily a function of size and shape. Depending on the source and nature of the water, suspended matter can be comprised of a variety of materials, such as soil, silt, fine clays, insoluble hydrocarbons, metal oxides, insoluble metal salts and natural organic matter, such as humic, fulvic and tannic acids derived from decaying vegetation, etc. The suspended matter can vary in size from ultrafine particulates (< 1 micron) that form colloidal dispersions, to larger sized particulates (>1 micron) that may settle under gravity.

Colloidal dispersions exhibit high surface area to mass ratios and can be greatly influenced by surface interactions in the water. Although colloidal insoluble particulates display an electrical surface charge that can be either positive or negative, it is more common to encounter negatively charged particles in the majority of colloidal dispersions. The strength of the electrical charge layer surrounding the colloid particle can be measured in millivolts and is commonly known as the zeta potential. As developed by Deryagin, Landau, Verwey and Overbeek (now recognized as the DVLO Theory), highly negatively charged colloidal particulates undergo charge-charge repulsion, which prevents colloidal particulates from coming together in close contact long enough to coagulate into larger particle agglomerates that can settle under gravity or be retained on a filter.1,2

Clarification involves the application of chemical coagulants and/or flocculants that interact with the colloidal particles, causing them to join to form larger coagulated particles, as illustrated in Figures 1-3. The coagulated particles can then be removed by gravity settling, filtration or a combination of both. 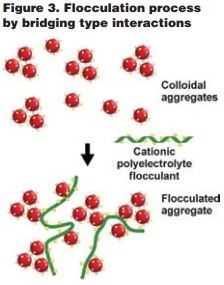 Coagulants
The more common inorganic metal coagulants are low molecular weight compounds exhibiting positive charges that, when added to water, neutralize the negative charges or zeta potential of colloidal particles that comprise colloidal dispersions. Neutralization or reduction of negative charges on the colloids destabilizes the charge-charge repulsion, thereby allowing colloidal particles to come closer together. This close association allows van der Waals forces of interaction to take place between particles, resulting in the formation of larger colloidal aggregates. Large colloidal aggregates settle to form high-volume sludges that are difficult to dewater. The most widely used inorganic metal coagulants include aluminum and iron salts, such as alum (aluminum sulfate) and ferric chloride. Their pre-polymerized forms include polyaluminum chlorides and polyferric sulfates.

Flocculants
In some cases, colloidal aggregates formed by metal coagulants may be small, unstable and difficult to rapidly settle or filter out. Improvements in colloidal aggregate size (flocs), particle characteristics and Cationic Water Treatment Options Part 1 By Everett Nichols, PhD, MSPH Figure 1. Coagulation of colloidal particles by a metal salt coagulant Figure 2. Examples of flocculant polymers Figure 3. Flocculation process by bridging type interactions Water Conditioning & Purification March 2013 stability can often be achieved through the use of flocculants. Flocculants can be used alone or in combination with inorganic metal coagulants. Flocculants can significantly increase the size of aggregates (flocs) and speed the time to settle or rise to the surface depending on the effect of the flocculant on floc density. Flocculants are typically long-chain, high molecular weight, linear organic polymers that can consist of numerous negativeor positive-charged functional groups. Some types of organic polymers may exhibit no charge. Charged flocculants/polymers are also referred to as polyelectrolytes. As illustrated in Figure 2, polymers can exhibit no charge (nonionic), a negative charge (anionic) or a positive charge (cationic). Other types of polymers can include both anionic and cationic functional groups within their polymeric chains (amphoteric).

Commonly used synthetic cationic polyelectrolyte flocculants, such as the cationic polyacrylamides, polydiallydimethylammonium choride (polyDADMAC) and polyamines, are chemically synthesized from petroleum-based hydrocarbons by chemical polymerization. The only known naturally cationic polysaccharide polyelectrolyte is chitosan, which is derived from chitin, a byproduct of the shellfish industry. Chitin is commercially obtained from the waste exoskeletons of crustaceans, including shrimp, crab and lobster.3 The effectiveness of polyelectrolyteinduced flocculation depends on a myriad of variables, some of which include pH, temperature, ionic strength, dissolved salts concentration and composition, suspension concentration and chemical properties of the insoluble suspended matter. The nature of the polyelectrolyte used also has a profound influence on the effectiveness of flocculation. Charge density, molecular weight and the overall chemical properties related to the ability of the polymer to participate in hydrophobic/hydrophilic binding interactions play a significant role in flocculation efficacy and subsequent solids separation and management.

Cationic polyelectrolytes often improve the speed of clarification and settling through bridging and/or electrostatic patch effects, as illustrated in Figures 3 and 4.4,8 Bridging type of interactions involve a polyelectrolyte chain adsorbing to multiple colloidal particles and aggregates through electrostatic charge interactions. High molecular weight, linear polyelectrolytes are more effective, which is most likely due to tails and loops of the polymers extending beyond the particle surfaces ,where they can encounter other particles in the dispersion. This electrostatic interaction brings colloids and/or colloidal aggregates together to create large flocs that are more stable and shear-resistant and less likely to come apart under agitation or filtration.4,8

Patch-type interactions refer to polyelectrolyte-adsorbed areas displayed heterogeneously over the surface of a particle, occurring as a result of electrostatic interactions between the polyelectrolyte chains and portions of the adsorbing particle surface. While the particles’ net charge may be zero, the heterogeneous distribution of non-neutralized charge over the particle surface may allow electrostatic interactions with the opposite charged surfaces of adjacent particles, resulting in particle aggregation.4,8

It is worth mentioning that although electrostatic-charge interaction plays a major role in cationic flocculation, other types of polyelectrolyte-particle interactions are involved. These can include a combination of van der Waals forces, hydrogen bonding and/or hydrophobic interactions between certain types of chemical groups present on polymer chains with other chemical groups on particulate surfaces.

For example, the flocculation performance of chitosans with differing degrees of charge and MW were studied on a variety of bacteria. It was demonstrated that electrostatic interactions was not the primary mechanism of flocculation for certain bacteria. Hydrophobic interactions played a dominant role instead.

Dr. Everett Nichols is Scientific Director of Water Treatment Technologies for HaloSource Inc. He received his BS Degree in bacteriology and public health from Washington State University and his MS Degree in public health and PhD from the University of Washington, specializing in pathobiology and the biochemisty of complex carbohydrates. He has over 28 years of experience working with natural carbohydrate biopolymers and complex oligosaccharides, including both chitin and chitosan. Nichols has directed and participated in the discovery, development and commercial launch of a variety of products, many of which are chitosan based and are used in recreational, industrial, storm and aquaria water applications. He provides a technical and strategic perspective to the solution of complex problems and also manages HaloSource’s intellectual property portfolio, which consists of more than 100 patents and pending patent applications.

HaloSource (www.halosource.com) is a global, clean water technology company headquartered in Bothell, WA. The company designs solutions to protect people, preserve the planet and celebrate our most valuable resource: water that is safer, cleaner and more accessible for people everywhere.