The water cycle, more formally known as the hydrological cycle, has helped many generations of junior high-school students understand nature’s continuous recycling of surface water to renew our supply of fresh, potable drinking water. Even today, it is a powerful graphic concept, yet it illustrates only a gross simplification of today’s actual threats: contaminants found in ground and surface water. Things like viruses, Giardia, Cryptosporidium, pesticides and pharmaceuticals found in water supplies often pass through central water treatment plants and distribution systems. This begs the question, is it time to reinvent the water cycle? A new, improved water cycle might help water treatment dealers dramatize for customers today’s reality: the need for final-barrier water protection at the point of use. Perhaps an updated water cycle should include central water treatment and final-barrier elements in the grand scheme of human-consumed water.

Joan B. Rose, Chair of a water research group at Michigan State University, paints a grim picture of The New Water Cycle in excerpts from a late 2012 workshop titled Global Issues in Water, Sanitation, and Health: “(Man is) a victim of The New Water Cycle, which includes hurricanes, flooding, pipe breaks, toxic blooms, boil orders, salt water intrusion, severe contamination and droughts. This is not your grandparents’ water cycle.”

Man is also a cause of interruptions in our natural renewable water supply, according to Rose. She says humans are now coupled to the water cycle and have modified this global resource, which is necessary for all life on earth, where usable and clean water are becoming scarcer. A less benign, animated view of the water cycle is captured in The Water Cycle Song, which can be seen and shared on YouTube, www.youtube.com/watch?v=YswL4dIDQuk. Over a bouncy soundtrack, it depicts atmospheric water, formation of clouds and all types of precipitation (rain, snow, sleet, fog); addresses groundwater infiltration/percolation (in addition to the water in lakes, rivers and oceans) and even includes a hurricane. Throughout, it shows people interacting with the cycle. 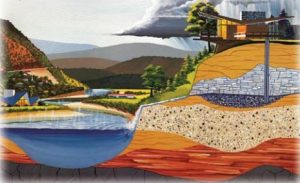 It is clear that humans have now affected the earth’s very large global climate system with a significant influence on water and the water cycle. This has changed the amount of water that returns as precipitation, where ‘how much’ is important for flooding and how fast it comes. Predictions have concluded that some parts of the US will become drier while others will become wetter. Last summer, the focus was on the drought that spread widely across the country, affecting not only water supplies but food security. A new assessment has shown that over the last 60 years, global droughts have increased by about 0.8 percent. More recently, however, all eyes were turned toward the US east coast as Hurricane Sandy propelled huge amounts of water with dramatic force into streets, subways and homes. During this storm, 18.3 million gallons (69.2 million liters) of raw waste gushed into a tributary of the Nansemond River, eventually closing shellfish beds; 500 million gallons (18.9 billion liters) of raw sewage every day was flowing into Newark Bay and more than 12 municipalities in New Jersey issued boil orders for drinking water.

Floods remain the number-one disaster globally, causing loss of life, economic damage and illnesses. The immediate impact on life and well being, especially with a storm like Sandy, is clearly visible, but the long-term concerns are associated with water pollution. Untreated sewage containing billions of bacteria, parasites and viruses are entering waterways and impacting water quality. But, if you don’t have power, what will you do? How will you gain access to safe water? Can we adapt our cities, sewage systems and agricultural schemes through water infrastructure to prevent and mitigate these ill effects? Maybe, but we need to be thinking about these issues, as both quantity and quality will be affected under this new water cycle.

Groundwater losses
Aquifers and wells are not going to be spared as part of the new water cycle, which will impact agricultural systems, coastal communities and river flows in general. Intensive groundwater extraction (which has a history of only about 50 years) is led by agriculture; losses are associated with this overdraft as more groundwater is pumped out than recharged, thus dropping the water table. Wells are going dry, even in places like Michigan, where moving from rain-fed agriculture to irrigation in the southwest region of the state has led to a drop in available water from key aquifers. It’s not just quantity; the quality of water under dry conditions shows that the groundwater contribution to rivers in Michigan, laced with human fecal pollution markers, eventually empties into one of the Great Lakes. Rising sea levels and salt water intrusion also exacerbate groundwater conditions in places like California. This is an issue that threatens the global food market and its benefits to billions of people around the world. Can we use groundwater in a sustainable way while feeding future generations? Can we enhance recharge? Maybe, but this hidden water resource needs to be brought to the top of the list for vulnerability assessment and protection under the pressures of the new water cycle.

Wastewater and water recycling
One thing is certain: water does move in a cycle and we reuse it all the time. Even with 20 percent of surface freshwater in the Great Lakes, the goal is to keep return flows (water that has been used by communities and industries) inside the basin. The largest diversion of water allowed (one billion gallons of water per day/ three billion liters) is the wastewater from Chicago, which is now pumped by reversing the flow of the Chicago River (eventually) to the Mississippi, instead of allowing its natural flow to Lake Michigan.

Early in the history of this grand city, one of the greatest engineering feats according to the American Society of Civil Engineers, was building the Chicago Sanitary and Ship Canal. This was done as a public health measure as waterborne typhoid was then affecting one of every 500 to 1,500 people. Typhoid in the US disappeared as the treatment of drinking water and control of wastewater were implemented.

The widespread use and unplanned reuse of wastewater indicates possible contamination by the pervasive appearance of pollutants, such as viruses, Giardia and pharmaceuticals in water supplies. In Singapore and in water-stressed states like California, however, planned water reuse is part of the management approach to address both quantity and quality under the new water cycle. Advanced treatment attempts to remove pathogens and emerging chemicals of concern; the water can then be used for irrigation and even for drinking water. About 35 billion gallons (1.3 trillion liters) of sewage are produced each day in the US and only five to six percent are reused. Can we improve our reuse of water? Can we enhance our wastewater treatment to produce water fit for beneficial purposes? Maybe. (Rose believes that more water quality testing, better wastewater treatment and acknowledgement of this recycling is needed.)

The Final Barrier: every dealer’s New Year resolution
Richard Mest of Master Water Conditioning led off the 2012 WQA Dealer Section meeting in Las Vegas with a slide presentation on The Final Barrier, a powerful marketing concept for positioning POU as the final wall of protection against contaminants for drinking water at the tap. Dealers were encouraged to utilize the presentation locally, as well as WQA-produced Final Barrier brochures available from the Association.

WQA reminds us that only one percent of all municipal water is consumed by humans. Therefore, it sees that the future of water treatment will be to treat it once at the central plant to protect the immediate health of the general population. Final-barrier water treatment, applied at the point of use, is in the hands of dealers and their customers, working together to determine the appropriate solution in each case. Well water customers will benefit from the same protective partnerships with professional dealers. Dealers should explain how the new water cycle includes many contaminants that can elude central water treatment. The solution they offer? The Final Barrier. Don’t forget to promote it in 2013.

David H. Martin is President of Lenzi Martin Marketing, Oak Park, IL, a firm specializing in water improvement and environmental marketing that integrates old and new media. He can be reached at (708) 848-8404 or by e-mail at: dmartin@lenzimartin.com.