Residents in a small town located in southeastern Wisconsin are no strangers to challenging water quality conditions. Aside from the typical private well water quality issues, Cedarburg residents are becoming increasingly aware of health related contaminants, especially arsenic, exceeding standards in area wells. According to US EPA, arsenic occurs naturally in the environment and as a byproduct of some agricultural and industrial activities. It can enter drinking water through the ground or as runoff into surface water sources. Arsenic is primarily found in two forms: trivalent and pentavalent arsenic, also known as arsenic III (As+3) and arsenic V (As+5). Arsenic acts like a metal that is found in organic and inorganic forms. Trivalent arsenic or inorganic arsenic is due to human activity and is considered to be more toxic then the organic form, pentavalent arsenic.

When US EPA changed the arsenic standard in drinking water in 2006 from 50 parts per billion (ppb) to 10 ppb, many of the residents then exceeded the regulated limits. The majority of the residents of this small town were unaware their home’s drinking water could be effected because arsenic is tasteless, colorless and odorless. Over time, this increase in consumer awareness has brought about more testing, which has led to more results exceeding the 10-ppb health standard. Consumer knowledge has led to a call to action, with many residents seeking a remedy through water treatment equipment and many consumers choose to address their drinking water issues with filtration. 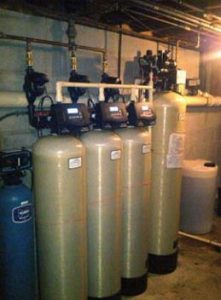 Options for filtration
POU systems, such as reverse osmosis, tend to be less expensive than POE systems. Depending on the form of arsenic found in the home’s water supply, POU treatment options may reduce the total arsenic level below US EPA requirements, making it an acceptable solution for some consumers. RO systems are often applied to applications where arsenic V is more prevalent then arsenic III because most RO systems will reject some portion of arsenic V without additional resources. Arsenic III will pass through an RO membrane, so it requires some form of oxidation to convert arsenic III to arsenic V, so it can be more readily rejected by the membrane. This conversion is often accomplished through the introduction of chlorine prior to the reverse osmosis system. The chlorine is subjected to the incoming water in a mixing chamber. Any residual chlorine from the mixing chamber is filtered by a carbon filter. All of this is done before the water goes through the reverse osmosis system.

Absorptive media is a popular form of arsenic filtration for POE applications. When water enters the home, it passes through media designed for arsenic adsorption, which can filter both forms of arsenic. Generally, adsorbent media has a lower capacity for arsenic III. The down side to absorptive media is the capacity of the media. When the media reaches capacity for reducing arsenic, it must be replaced to ensure adequate arsenic reduction; therefore, onsite regeneration is not practical for residential applications. Media replacement costs can be expensive, often making it less cost effective than other reduction options. Ongoing costs can be objectionable to the consumer and absorptive media may not be the best fit.

Iron oxidation and co-precipitation, combined with effective filtering is an alternative process for arsenic reduction, making POE treatment more affordable for consumers, while offering a reliable long-term solution. This technology is recognized by US EPA as one of the best available technologies (BAT) for arsenic reduction.

Many affected by downstream contamination
Cedarburg’s arsenic issues had a root cause: a landfill that was located less than a mile from a well that provided water for the municipality. The landfill was closed in 1972, but not before contaminants seeped from the landfill into nearby wells, according to Cedarburg Light and Water Utility General Manager Dale Lythjohan. In the early 1990s, many private wells in the surrounding areas were tested for various contaminants. Test results showed the wells surrounding the landBy Nathan Mertins, CWS-1 Emerging Contaminant Found in High Levels Leaves Small Town Searching for a Solution Water Conditioning & Purification January 2013 fill contained various harmful elements, making the water unsafe for consumption. Some, but not all local residents were provided city water, which the city was ordered to provide. (The effects of the landfill on the water supply are still felt today, with more contaminants appearing as technology allows for more in-depth testing.) *In June 2010, the city detected a small amount (0.18 ppb) of vinyl chloride in one of the five city well water supply. State regulation limits vinyl chloride in drinking water to 0.2 ppb. The well was closed in July 2010. It was later reopened continues to be monitored today.

Some city residents contacted a local water treatment company with questions about the contamination issue. The company explored many options to provide the most effective way of reducing arsenic and notified prospective customers that the method of treatment often depends on the arsenic form, contamination levels detected, application, water usage, potential interference and consumer concern. Several treatment options, including reverse osmosis, adsorptive filtration and iron oxidation and co-precipitation were discussed, with detailed explanations of each option.

To meet the demands of arsenic reduction requirements for one customer, the, company selected a patented POE technology that uses naturally occurring iron, frequently found in Midwest well waters, to help filter the arsenic. The system was installed in February 2012. Once the arsenic was converted to its pentavalent form with the introduction of chlorine, it complexed to an iron particle and the arsenic-iron compound was filtered in a multimedia filter tank. A set backwashing schedule, based on amount of water used and/or number of days in operation, helped keep the filter clean automatically. If the water supply didn’t contain adequate iron, an iron-based coagulant was fed into the water stream prior to the arsenic reduction system.

Conclusion
The water was tested the day after the equipment was installed and water sampling has occurred on a regular quarterly basis to confirm performance of the equipment. Thus far, all tests have proved the system is working as designed, with total arsenic levels at two ppb or less. (Two ppm is the Method Reporting Limit (MRL). Testing is expected to continue on a quarterly basis to ensure the system maintains operational integrity and the water quality remains uncontaminated.

About the author
Nathan Mertins is a Territory Manager for Guthrie & Frey Water Conditioning. He has a Bachelor’s Degree in business management and is a Certified Water Specialist I. Mertins can be reached at (262) 646-6330 or nmertins@guthriefrey.com.

About the company
Guthrie & Frey Water Conditioning is headquartered in Hartland, WI and has been serving the southeastern state for 15-plus years. The company expanded its operation and service area in 2009 to accommodate those residents who have greater well water issues than poor aesthetic water quality.

About the products
Through extensive research and product design, Hellenbrand, Inc. has developed The Arsenic Curtain to provide its dealers with equipment to reduce arsenic levels through POE technology.