There is certainly substantial interest in treating drinking water for arsenic, a naturally occurring mineral that is present in many residential drinking water supplies. For many consumers, arsenic in drinking water is not an issue, as surveys of US drinking water have indicated that about 80 percent of water supplies have less than two ug/L of arsenic. There are some consumers who do have concerns regarding arsenic, however, because two percent of drinking water supplies exceed 20 ug/L. These concerns arise from well-documented, potential adverse effects on human health related to consumption of arsenic. In fact, inorganic arsenic has been utilized as an intentional poison for hundreds of years. High oral doses over 60,000 ug/L can cause death due to acute health effects. Lower doses of inorganic arsenic (about 300 to 30,000 ug/L) can also be an issue because they can cause stomach and intestinal irritation, including stomach ache, nausea, vomiting and diarrhea. Other effects of oral consumption of inorganic arsenic may include decreased production of red and white blood cells. This condition can lead to abnormal heart rhythm, blood-vessel damage, fatigue and impaired nerve function.

There are other effects of arsenic consumption, too. Probably the most characteristic effect of long-term oral exposure to inorganic arsenic is skin damage, which can cause development of dark spots and discoloration and corn or wart-like areas can appear on the hands, feet and other parts of the body, with the potential to develop into skin cancer. Additionally, oral ingestion of arsenic may also increase the risk of lung, liver, bladder, prostate or kidney cancer. Because of these links to cancer, the US Department of Health and Human Services (DHHS) has declared inorganic arsenic a known carcinogen. The International Agency for Research on Cancer (IARC), US EPA and the National Toxicology Program (NTP) have classified inorganic arsenic as a known human carcinogen. 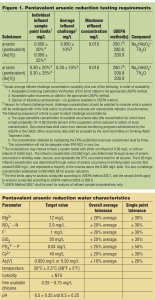 On January 22, 2001, US EPA adopted a new standard of 10 ug/L as a maximum contaminant level (MCL) for arsenic; previously, it had been 50 ug/L. Public water systems have been required to comply with the newer standard since January 23, 2006. Many communities were forced to improve their water treatment capabilities for arsenic reduction when this new regulation went into effect. Many private well owners were faced with the fact that their well water did not meet the new MCL for arsenic. Not only were these consumers dealing with a health concern regarding the levels of arsenic in their well water, but they also faced difficulties in selling their homes because of arsenic. Private well owners and small communities have been searching for proven POU technologies and products to help them treat arsenic in drinking water. This need is supported by a number of NSF/ANSI Drinking Water Treatment Unit (DWTU) Standards that address arsenic reduction test methods, claims and requirements, including NSF/ANSI 53 for media-based POU and POE systems.

Arsenic reduction claims
Arsenic exists primarily in two forms in drinking water: arsenic III (As III or trivalent arsenic) and arsenic V (As V or pentavalent arsenic). Although As V is generally more amenable to treatment in drinking water by various media, this is not always the case. Further, As III and As V can behave differently at low versus high pH, resulting in different treatment efficiencies, with the differences depending on the form of the arsenic, the pH and the media characteristics. For this reason there are two different claims related to treatment of arsenic in drinking water under NSF/ANSI 53:

Arsenic reduction testing
The requirements for arsenic reduction testing, as well as the water characteristics for this testing, are included in Figures 1 and 2. Note that there is either a 0.30 mg/L influent challenge or a 0.050 mg/L influent challenge for these tests. The default influent challenge is the 0.30 mg/L level. The philosophy for the secondary 0.050 mg/L influent challenge is that consumers of water from supplies that were previously in compliance with the 50 ug/L (0.050 mg/L) arsenic MCL would be able to choose systems that have been demonstrated to treat water at that level or below to the new requirement of 10 ug/L (0.010 mg/L). Additionally, note that the water characteristics specify the concentration of several ions. It is important to have these ions included because they can be interferences for various media as the media treats arsenic contamination and they can also be present in drinking water. They are included to ensure a robust test representative of issues encountered in real-world treatment. Finally, note that the As V reduction tests require the presence of free available chlorine, while conversely, the As III reduction tests require the absence of dissolved oxygen. The reason here is to have an oxidizer present in the As V reduction test to ensure the arsenic remains in the As V form, whereas it is important to make sure the As III reduction test does not have any oxidizer present to prevent formation of As V. 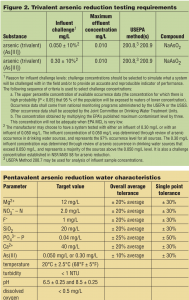 Adapting to meet consumer needs
The result of the newer, lower MCL was that many consumers were now faced with issues of non-compliance and concerns about their health. This also became a financial concern for private well owners with arsenic contamination seeking to sell their homes. Mortgage lenders in certain parts of Michigan (and other states) are now requiring arsenic analyses on the drinking water for those homes with private well drinking water sources in areas with known arsenic concentrations. As has been the case in numerous situations, the POU/POE industry foresaw this need and was ready to fill it. The industry developed products to treat arsenic, understood the complexities of treating it in drinking water and contributed to the NSF standards development process to provide a basis for performance validation. In doing so, the industry was once again proactive and successful in serving consumers by helping them to protect their health and enhance the value of their homes.

About the author
Rick Andrew is the General Manager of NSF’s Drinking Water Treatment Units (POU/POE), ERS (Protocols) and Biosafety Cabinetry Programs. He has previously served as the Operations Manager and, prior to that, Technical Manager for the program. Andrew has a Bachelor’s Degree in chemistry and an MBA from the University of Michigan. He can be reached at (800) NSF-MARK or email Andrew@nsf.org.