AXEON Water Technologies announced the acquisition of assets and intellectual property rights of the systems manufacturer formerly known as Pure-O-Tech, a manufacturer and full-service provider of commercial and industrial RO, nanofiltration, ozone and filtration systems. 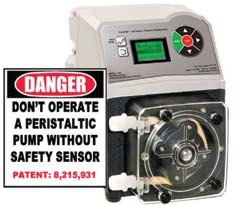 Blue-White® has been awarded US Patent #8,215,931 for its new peristaltic pump safety switch. The safety switch stops the pump when the front cover is removed, and the pump will only operate in maintenance mode (a set rpm) while the front cover remains off, protecting the operator while routine pump-head maintenance is performed. This patented safety feature is included on all Blue-White Flex-Pro® and ProSeries-M™ Peristaltic Metering Pumps.
Pentair Rewards Program for Chester Paul

The Chester Paul Company announced its participation in the NEW Pentair® Rewards Program. This lucrative program is designed to reward dealer purchases of Fleck® 5800 valves, Pentair TLC membranes, and Pentek® Big Blue® housings. The promotion runs from October 1 to November 16. Participating dealers can earn up to $400 (USD) per location. For more information, please contact a Chester Paul representative at (800) 227-2093 or [email protected]

Water-Right, Inc. continues to round out their product offering with a full line of Pentek and Hydronix cartridge filters and housings. The company stocks and distributes a wide variety for virtually any type of problem water. Specialty cartridges are also available for use in specific applications, such as heavy iron removal or corrosion control. Information and pricing for the Pentek and Hydronix cartridge filters and housings are available through their sales representatives. Contact Water-Right at (800) 777-1426 for more information.

NSF International has developed the first comprehensive protocol that evaluates the performance, health and safety of every component of a swim spa. NSF engineers incorporated requirements from 16 different national pool and spa safety and quality standards into this new protocol, including NSF/ANSI 50, to simplify the evaluation process for swim spas. Master Spas’ Michael Phelps Signature Swim Spas are the first to earn certification to the new protocol.

The latest report from Global Water Intelligence confirms the desalination industry is now taking significant steps to address the issues of scarcity and sustainability and that it is also recognizing that embracing new technologies can be good news for the bottom line. It predicts that salt removal and wastewater recycling technologies are expected to become essential ingredients in operational strategy, growing by 11.4 percent over the next five years to reach a total market value of $11,963 billion (USD) by 2025.

Living Machine Systems, L3C announced that Living Machine® technology is actively treating and recycling all wastewater at Western Wayne County School District’s new Evergreen Elementary School in northeastern Pennsylvania. It is the largest on-site wastewater reuse system permitted in the state.
The Evergreen Elementary school site was not served by sewer facilities and school officials wanted to find an on-site wastewater treatment system that could not only treat wastewater, but also recycle all wastewater into a high-quality (tertiary standard) resource for irrigating athletic fields and flushing toilets.

Envirogen Technologies, Inc. has been awarded a contract to supply two biological odor-control systems as part of a Western Wake Regional Wastewater Management Facility (WWRWMF) construction initiative, managed by the Town of Cary, NC and its municipal partners. The two systems will utilize the company’s biofiltration technology to remove odors and 99 percent of hydrogen sulfide (H2S) from air at the wastewater operation’s West Cary and Beaver Creek pump stations. The West Cary site will feature Envirogen’s new BTF-4500 modular vessel design, while the Beaver Creek site will receive a custom-designed, built-in-place biofilter. The company will also provide on-site customer support and training to assist in start-up and a 10-year warranty covering media life.

The market for water and wastewater treatment equipment is expanding as food processing plants are looking to reduce their water footprints, wastewater discharge and wastewater treatment costs. As the food and beverage industry is seeking greater sustainability, equipment suppliers can work with retailers to aid the end-market’s endeavors through processing and packaging. New analysis from Frost & Sullivan’s Analysis of the Water and Wastewater Treatment Equipment Market in the Food and Beverage Industry research finds that the market earned revenues of $288.7 million (USD) in 2011 and estimates this to reach $336.2 million in 2017.

WesTech Engineering Inc., through its subsidiary WWETCO, was selected by Black & Veatch and the City of Springfield, OH to design and manufacture the largest compressible media filter in the world. Installation of 100 MGD WWETCO FlexFilter™ will begin at the Springfield Wastewater Treatment Plant (WWTP) in 2013. The FlexFilter will contain nearly 20,000 cubic feet of compressible media and will be used 20 to 30 times a year as part of a high-rate treatment facility to treat CSO events. This process will extend the performance capability of the plant so that CSO flows will not have to be directed to bypass the facility, enhancing the environmental health of the nearby Mad River.

The Dow Chemical Company and the Saline Water Conversion Corporation (SWCC) have signed a commercial agreement for research collaboration. Their first action will be to launch a pilot project to test the suitability of innovative desalination technologies for conditions in the Arabian Gulf. The announcement follows a memorandum of understanding (MoU) in March 2012 to conduct joint research in desalination technologies. Dow and SWCC will partner to test state-of-the-art desalination technologies, evaluating their performance in the Arabian Gulf’s unique environment, including their ability to effectively handle factors such as high salinity and high temperatures. The tests will be conducted by the Saline Water Desalination Research Institute (SWDRI) in Al Jubail, Saudi Arabia, over a period of one year.

Pionetics Corporation announced that the LINX® technology is now an integral part of the new Da Vinci Water Purifier introduced by Woongjin Coway, South Korea’s leading manufacturer of home wellness appliances, such as water filtration appliances and air purifiers. LINX technology employs the basics of ion exchange technology, but uses electricity for regeneration rather than salt or other chemicals. Woongjin Coway was most interested in the unique Dial-A-Taste® capability of LINX technology, which controls the mineral content of the product water, effectively allowing consumers to dial their taste.