Energy demand is expected to continue growing, and while conventional energy resource endowments greatly differ between countries, they all face increasing local and global environmental constraints. In this context, renewable energy can play an important role by addressing increasing needs, as well as concerns about stability and sustainable development. In this scenario, water is becoming more and more a major source of pressure for efficiency improvement—not only in most of the Middle East and North Africa (MENA) countries, which account for more than 40 percent of the world’s desalination capacity, but also worldwide. The global community places a lot of emphasis on energy efficiency solutions. It is easy to understand why when one recognizes the magnitude of future energy demands. As an example, Figure 1, quoted by the European Renewable Energy Council in their 2009 report, shows a potential scenario whereby the world will consume almost 40,000 terawatt-hours (Twh) per annum of additional energy in 2050. (One terawatt hour is the equivalent of 1,000,000,000 kilowatt hours.)

The graph also shows, however, in this scenario (indicated on the right) that the overall non-renewable energy component will be reduced to less than 10,000 Twh per annum—less than half of the current amount. Looking at this graph, it is clear that energy efficiency represents half of our potential to reduce the carbon footprint on the planet. Energy efficiency is often considered a very abstract term for simply using our existing resources to produce and consume water and power in a smarter way. Water (a key component of the water-energy nexus) is an area of significant potential for energy efficiency and therefore, greenhouse emission reduction in the world. Yet, to date, very little has been done to tap its incredible potential in this respect. In fact, there is an enormous potential in terms of efficiency improvements in the desalination market. Desalination is a fast-changing technology and several plants, particularly in the Middle East, installed and commissioned between the 1980s and 2000s, are still in operation. Measured by today’s standards, however, their specific energy consumption is quite high. In addition, new plants are being designed to place environmental safeguards high on the list of considerations. The good news is that efficiency improvement measures could be made relatively quickly in these plants. Moreover, they would involve low capital expenditure (CAPEX) and would ensure the possibility of maintaining, if not extending, the plant amortization period by working on a more efficient pattern. Today, there is a great emphasis on renewable desalination. It is very exciting to see that several public institutions are investing a lot of resources in scientific research aimed at promoting the development of renewable desalination technologies. This will certainly be the technical solution the desalination community needs to think about for its day-after-tomorrow future desalination solutions.

Looking ahead, we have to take into account that there are a large number of desalination units now installed and operating whose commercial life is scheduled to last for 20 to 30 years, if not longer. The data show that almost 200 MW could be saved in the Middle East through simple value-engineering retrofits. This strategy is applicable to all desalination technologies, from thermal to seawater reverse osmosis (SWRO). There are several examples of ways to highlight the efficacy of these solutions.

Simply changing the impeller of main process pumps to state-of-the-art efficiency and decreasing auxiliary power consumption would be an efficient measure to reduce energy and carbon footprint in an energy-efficiency scheme. Figure 3 is an example of one of the first projects made in this regard. It shows a 30-year-old brine recirculation pump serving an equally old multi-stage flash distiller. Table 1 shows the comparison between efficiency of the original pump and a newer unit, and the related energy and carbon savings.

A more sophisticated solution would be to re-engineer the pumping circuit requirement based on operational feedback of the plant. Many plants, particularly thermal plants designed between the 1980s and early 2000s, were extremely generous with pump head. Simple retrofits would have tremendous positive impact on power consumption. Also, in this case, a typical option has been to reduce the required pump head, based on a more accurate analysis of the circuit required pressure as schematically indicated in the Figure 4. In simple terms, pump head refers to the pressure delivered by the pump. Head depends on friction losses and on pressure and gravity required by the system. It is conventionally measured in meters (m) or feet (ft).

Other, even more sophisticated activities include decreasing the steam extraction pressure to thermal desalination plants to increase the power rendered to the steam turbine by the same steam. In this case, the lower the steam extraction pressure, the more the power that can be rendered by the same steam flow. The possibility of retrofitting more efficient solutions also extends to SWRO technologies. Here, the business environment has been more proactive. Consider the success of plants such as Las Palmas III, Tordera Plant Palmachim and various sites in Malta (Pembroke, Lapsi, etc.) in replacing old-type Pelton turbines with state-of-the-art isobaric devices. If this model could extend to many other plants in the Middle East, it would generate savings in power consumption of the order of hundreds of megawatts.

Further possibilities will be generated by enhancing the recovery rate of the SWRO trains and decreasing operating pressure as SWRO technology progresses. Overall, in any plant, there is a wealth of energy that can be saved in our industry. This can be done with relatively minor investments that would withstand scrutiny even in today’s very cautious bank approach to the market and financing. If the correct incentives are provided, these activities could yield a very fast payback, with very low risk. Often the problem lies in convincing end-users that there is the possibility of modifying the plants and making them work better and more efficiently as technology progresses. While several countries, especially in the Gulf Cooperation Countries (GCC), are investing heavily in research for renewable desalination, it is important that the desalination community recognize a paradoxical situation that is occurring now in many countries where desalination is a cornerstone of economical growth. While universities and research centers are working on renewable solutions with very generous budgets, at the same time, industry solutions are often still based on obsolete technical schemes. In addition, the industry approach is still very conservative when it comes to selecting the technology for future projects. This is true even in the Middle East, which is proactively exploring the potential of renewables, in particular solar, energy.

Greater energy efficiency will bridge the gap between the energy solutions for today’s desalination plants and the fully sustainable solutions that the industry is trying to achieve. In addition to plant-based energy solutions, there are several initiatives that would generate significant savings in the field of wastewater reuse. Water generated by desalination is often used for non-domestic purposes, such as air conditioning, landscaping and industrial applications. Figure 2 illustrates the consumption breakdown by sector during 2006 for the Kingdom of Saudi Arabia, showing that only nine percent of the overall water demand is for domestic purposes. This water is pumped great distances through long pipeline structures to reach the final utility. Often, the transportation costs are as high, if not higher, than generation costs. From the energy point of view, a program of water conservation and also of wastewater reclamation and reuse for non-domestic purposes would create a tremendous savings in the energy footprint. 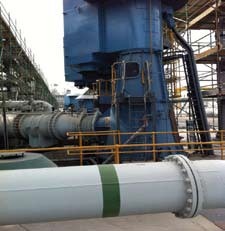 Figure 5 illustrates schematically in kWh/m3 (kilowatt hour per cubic meter) of produced water the difference between desalination and wastewater-specific energy consumption. As can be seen, for thermal desalination the specific energy consumption can be as high as 30 kWh/m3, with the addition of another three to 20 kWh/m3 for transmission from generation site to utility. Wastewater generation will only consume 0.5 to one kWh/m3 and as this is generated close to the utility point, the energy footprint for transmission is not required. 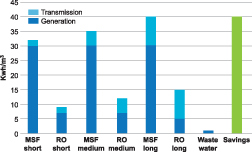 The challenge the market faces today is not finding renewable desalination processes that address our collective goal. Instead, the real task at hand is making sure that the solutions we develop are industrially and commercially viable and can pass from the academic sphere to industrial reality in a timely fashion.

Corrado Sommariva, PhD, is President of the International Desalination Association (IDA), which has formed an Energy Task Force whose mission is to help the industry achieve a 20-percent reduction in energy consumption by 2015. He is presently the Managing Director of ILF Consulting Engineers Middle East and the head of the company’s worldwide desalination activities. Sommariva has worked for the last 20 year in desalination. He has experience in thermal, reverse osmosis and wastewater systems and served in all the major desalination developments in the Middle East in various roles. He has served on the IDA Board of Directors for the last 12 years, serving as 1st Vice President in 2003-2004 and Chairman of the Affiliate Committee. Sommariva was also Technical co-Chair of the IDA World Congress in Dubai. In addition, he has served on the European Desalination Society Board of Directors for the last 14 years and was President in 2004-2005. Sommariva holds a PhD in chemical engineering from Genoa University and a diploma in Management from Leicester University. He is an Honorary Professor at Genoa and L’Aquila Universities, where he holds regular courses on desalination and water reuse related matters. Sommariva also holds frequent courses with the IDA Desalination Academy. He can be reached at Corrado.Sommariva@ilf.com. For more information about IDA, visit www.idadesal.org.