Advanced oxidative process (AOP) technology has been in use to address unique water quality challenges since the 1970s. AOP involves the generation of hydroxyl (•OH) ions to unleash their awesome oxidative power in addressing numerous water quality issues in both freshwater and wastewater applications. Chemical oxidation processes involve oxidation-reduction (redox) reactions, which are essentially an exchange of electrons between various chemical species. This electron exchange affects the valence (oxidation state) of the chemical species involved. Carbon bonds are broken as a result of this electron exchange and the organic compounds are either completely destroyed or simply converted to smaller, less hazardous compounds. While AOP technology is familiar to industrial wastewater operators, this is a new concept to many freshwater/potable water professionals and should be studied to enhance the ability to aid clients. 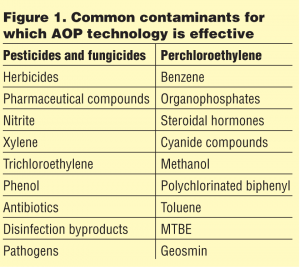 AOP technology has been effectively used internationally to address several contaminants (see Figure 1). Hydroxyl ions will be familiar to water quality improvement experts, since the hydroxide anion (OH-) is used to regenerate weak-base anion (WBA) ion exchange resins. The hydroxyl radical used in AOPs (•OH) is the neutral form and is entirely different, being highly reactive and unstable:

AOP is especially of interest in developing markets, since the electricity required for some methods can be generated onsite via renewable energy methods and there is little ongoing need for consumables that are difficult to transport and store. Some innovators are even proposing harnessing magnified equatorial sunlight as a UV donor in certain photocatalytic AOP processes.

There are many AOP methods currently in use, as well as a few theoretical applications that have yet to be deployed outside the laboratory. The two most common pathways of generating hydroxyls through AOP are with and without added ozone. Processes that add ozone are generally regarded as being ‘cleaner’ and less complicated than non-ozone processes, but the ozone equipment itself requires a significant capital and maintenance investment that shouldn’t be overlooked when evaluating the cost-effectiveness of AOP options. 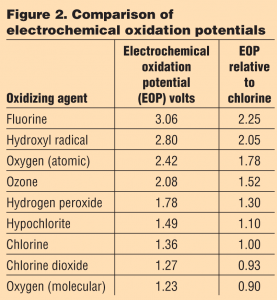 Common ozone methods
These methods rely on ozone (O3) as an oxygen donor. Depending on the specific process, ozone is injected into the water stream and then reacted with the water and subsequent parts of the process to develop •OH radicals. Remember that ozone will react with anything oxidizable in the water, before participating in the AOP reaction. Inject the ozone sufficiently upstream in a properly calculated dosage and concentration to satisfy the base ozone demand before beginning the AOP reaction.

Ozone and UV. Ozone reacts with ultraviolet light at a particular wavelength and intensity to develop hydrogen peroxide and then further to develop hydroxyl radicals. This method is relatively simple and quite effective as long as the system integrator/designer calculates potential interference factors, like turbidity, suspended solids and hardness minerals that could interfere with UV transmission.

Ozone and titanium dioxide. Ozone reacts with the titanium diox ide surface to create an electron hole pair. Ozone develops to hydrogen peroxide and then further to hydroxyl radicals while in contact with the TiO2 catalyst. Naturally, the most effective (and complex) ozone-based method is to leverage the benefits of both ozone and ultraviolet light catalyzed by a titanium dioxide-doped surface.

Most common non-ozone methods
These methods rely on reagents like hydrogen peroxide along with a catalyst to develop •OH radicals. This method can be beneficial when working with high-turbidity waters that would significantly interfere with ultraviolet light’s ability to pass through the water. 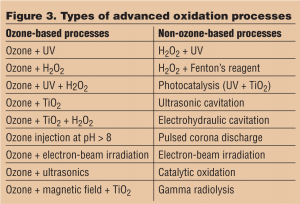 Fenton’s reagent
The most common non-ozone method is to simply add Fenton’s reagent to the water being treated. Fenton’s reagent is a unique combination of hydrogen peroxide and a ferrous compound that act together to develop hydroxyl radicals and conventional hydroxyl anions. Fenton chemistry has great potential when properly applied and the operator allows for the inherent exothermic reaction and pH swing.

Hydrogen peroxide and UV
By injecting hydrogen peroxide into the untreated water stream, overcoming the initial ozone demand, and then irradiating with UV light at an appropriate wavelength and intensity, hydroxyl radicals are developed. This method is very effective if the proper balancing chemistry is performed, with the only major drawback being sourcing and storing hydrogen peroxide on site.

UV and titanium dioxide
In my opinion, the most promising non-ozone AOP technology is the synergy of UV and TiO2. Titanium dioxide reacts with UV light to create an electron hole pair that catalyzes the development of ozone, hydrogen peroxide and then hydroxyl radicals. This catalysis is highly effective and requires little energy. Naturally, it is negatively affected by the turbidity of the water as well as adhesions that occlude the titanium surface. As manufacturers develop more cost-effective ways to create a high-density TiO2 matrix, this technology has the potential to drive the installed cost of AOP down significantly. A downside to this AOP method is the necessity for a reasonable amount of free dissolved oxygen to achieve maximum effectiveness.

Magic bullet?
Looking at the impressive arsenal of AOP tools available and the potential to address so many contaminants, one could be tempted to apply AOP technology as a cure-all technology. Unfortunately, AOP has complicating factors as well as operational restrictions that vary depending on the operating environment, water quality challenge and specific technology deployed.

When evaluating methods of drinking water treatment, sanitation and wastewater management in residential, commercial and industrial markets, AOP should be seriously considered as an alternative or adjunct to more conventional technologies. Consult with your independent water consultant or OEM to select the appropriate tool for each project.