Last week, I received an email from a panicked mother, concerned that her children had been exposed to the deadly Naegleria fowleri ameba. With a generally uncommon transmission route, via forced entry of contaminated water into the nasal passages, N. fowleri infections are rare. This mother, however, used a water-filled neti pot to rinse her and her children’s sinuses before finding out about the related CDC (US Centers for Disease Control and Prevention) and FDA (US Food and Drug Administration) warnings. Many are unaware of the various exposure routes of pathogenic ameba, but where should precautions begin—and when should panic set in?

Fatal outcomes
Commonly found in warm, freshwater environments (particularly in the southern-tier states), the free-living ameba enters the human body through the nose, where it can cause a severe brain infection known as primary amebic meningoencephalitis (PAM). Naegleria grows best at higher temperatures (up to 115°F/46.1°C) and readily proliferates in warm aquatic environments, whether in tap water or natural lakes and streams. Therefore, most infections occur in the warmer months of July, August and September. Other documented exposures include an unchlorinated swimming pool and tap water via baptism or bathing activities. While conventional water treatment is effective against the ameba, treated tap water and associated storage containers are not sterile. Under the right conditions, ameba and bacteria begin to regrow and can quickly reach high levels of contamination. Symptoms of headache, fever, nausea or vomiting usually begin after about five days of Naegleria fowleri infection, accompanied with symptoms of stiff neck, confusion and seizures as infected brain tissue is destroyed, with death occurring after about another five to seven days. The fatality rate of N. fowleri infection is greater than 99 percent.

Although new methods are being developed to diagnose Naegleria infections, a rapid test to identify the ameba is not available and only a few labs in the US are skilled at detection. Even with a proper diagnosis, treatment is minimally effective. Globally, only two people have survived the infection, one in California in 1979 and one in Mexico in 2003. Treatment, however, has not been successful in many others treated with the same type of drug combinations as the two survivors. Differences in the strain of the ameba are thought to result in milder versus more severe infections in humans. 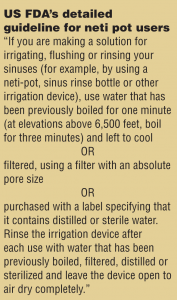 A common waterborne contaminant
According to US CDC, in the last 10 years there were only 32 Naegleria fowleri infections reported in the US. The majority of infections (28.88 percent) were from swimming in contaminated recreational water, while two were from an untreated water supply from a contaminated natural hot spring. Surveys of natural waters in Tulsa, OK found that 18 percent of 2,018 samples tested positive for N. fowleri. In Egypt, researchers found 60 percent (6/10) canal water samples and 75 percent (12/16) of swimming pool samples positive for the ameba. Others found N. fowleri in 22 percent of hot water samples collected from six hospital water systems and 89 percent (17/19) of household taps and drain traps (see On Tap, November 2007).

Monitoring data indicates that hundreds of millions of people are exposed to pathogenic ameba each year; however, infections remain very rare. Environments are not routinely monitored for N. fowleri but US CDC recommends that its presence should be assumed in any warm, natural waters. The best protection from suspect waters is for swimmers to avoid head submersion or other activities that result in water going up the nose.

New exposure potentials
Millions of Americans suffer from sinus headaches and clogged nasal passages. In search of a natural remedy for relief of nasal congestion and pressure, many have turned to the use of neti pots. These devices look like mini Aladdin’s lamps that a genie might pop out of—but they are actually small pitchers designed to pour water into nasal passages. To use, the pots are filled with a saline (salt and water) solution and the spout placed at the opening of one nostril to form a light seal. Leaning over a sink, the solution is poured into the upper nostril and allowed to flow out of the lower nostril. The procedure is repeated on the other side. Nasal irrigation loosens and clears mucus, dust, airborne allergens and other irritants from sinuses and increases the efficiency of the small hairs (i.e., cilia) in the nose to clear nasal passages. This procedure can provide relief from a variety of acute and chronic sinus symptom. Evidence of the method being used has been found in ancient Sanskrit writings and more recently, popular media persona such as Oprah Winfrey and Dr. Mehmet Oz, have promoted it’s use. In 2011, however, improper use of neti pots was suspected in the fatal case of N. fowleri infection in a 51-year-old woman and a 20-year-old man in Louisiana. This unique exposure route of N. fowleri prompted an FDA investigation on how to prevent future neti pot infections.

Precautionary measures
The FDA investigation led to a warning that improper use of neti pots (and related nasal rinsing devices such as bulb syringes, squeeze bottles and battery-operated pulsed water devices) can be hazardous to your health or even fatal. Although generally safe, use of tap water in neti pots can be dangerous. Tap water is not free of microbes, including bacteria and ameba, which can increase in numbers in warm environments. N. fowleri ameba present in drinking water are not harmful when ingested but can be deadly when forced into the nasal passage where it can access vulnerable brain tissue. While most websites instruct users to make their neti pot rinse solutions with a mixture of salt and purified or sterile water, information attributed to Dr. Oz on Oprah.com was less clear, stating: “Before you try pouring water into your nostril, Dr. Oz offers some neti pot pointers. First, mix warm water with a quarter teaspoon of non-iodized salt.”
According to the FDA, some neti pot manufacturers provide “misleading or contradictory information, or lack of guidelines” related to cleaning and the safe use of the product. In particular, some manufacturers instruct consumers, either in printed materials or via pictures or video demonstrations, to use plain tap water. Missing is the information that the water should be distilled, sterile or boiled. Lack of information and understanding related to N. fowleri can, justifiably, lead to panic when precautions, at least in the case of neti pots, are relatively simple.