Although outside of US EPA’s regulatory jurisdiction, private drinking water wells remain a topic of discussion and concern. A 2009 US Geological Survey (USGS) report provides clear evidence of groundwater vulnerability to contamination. A recently updated US EPA website, Private Drinking Water Wells, provides a list of important resources for homeowners, who are advised to take special precautions to ensure that their drinking water supply is safe, but the level of homeowner awareness and compliance with suggested guidelines remains uncertain.

Statistics of water use
Replenished by rain and melting snow, groundwater is the source of drinking water for about half of the US population. Most are supplied via municipal drinking water systems that are routinely monitored for contamination potentials and may be treated by filtration, disinfection or other methods necessary to meet federal water quality regulations. Approximately 15 percent of the US population (more than 43 million people) obtains household water from a self-supplied source, including groundwater wells, springs and rainwater collection (i.e., cisterns). Self-supplied (or private) water sources are not regulated nor are they routinely tested and monitored for quality indicators, like municipal water supplies. Most states do, however, have construction standards and some city and county health departments have permitting/inspection requirements to ensure proper construction of home wells. Beyond the initial construction effort, the homeowner is responsible for maintaining the quality of the delivered water from a private system.

Vulnerability of private water supplies
Proper design of private wells is essential to prevent potential contamination. Individual states may have their own licensing and registration program for groundwater contractors. Consumers may also contact the National Ground Water Association (www.ngwa.org) for a list of water well drillers, pump-well installers and other related contractors who have completed a voluntary certification program and passed a test related to specific recommendations and compliance issues.

Consideration of septic tank setback (a minimum of 50 feet [15.2 meters]), location of livestock (50 feet), manure composting piles (250 feet [76.2 meters]) and various organic and chemical storage tanks (1,000 feet [304.8 meters]) are standard precautions. Deeper wells are generally preferred as they allow increased filtration of the supply through soils, which aids in the removal of contaminants as new water recharges the groundwater aquifer.

Movement through soil, however, can introduce additional contaminants. Flowing water may pick up aesthetically unacceptable levels of minerals (i.e., magnesium, calcium) and is also vulnerable to contamination from natural contaminants (including arsenic and radon) present in the soil. Storm events can also be problematic, due to soil erosion and runoff of contaminants from roads or animal operations that can leach into the water table.

Routine maintenance and monitoring of private wells should be a standard precaution. Knowledge of the potential sources of contaminants in a homeowner’s specific area can be used to tailor monitoring and possible treatment needs. While certain contaminants are detectable by sight, taste or odor, others may not always be obvious (see Table 1). Pathogenic microbes, nitrates, radioactive elements and heavy metals are just a few examples of common environmental contaminants found in groundwater. 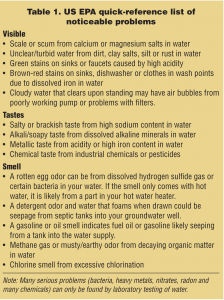 Groundwater survey results
Outbreak data
During the latest published survey of US drinking water outbreaks from 2007-2008, 13 out of 36 were due to untreated or inadequately treated groundwater. Five of 13 groundwater outbreaks involved individual water systems with untreated groundwater sources. Improperly constructed wells, improperly maintained or placed septic systems, contamination from wild or domestic animals, heavy rainfall and contamination through porous rock structures were all reported as contaminating factors. Etiological agents identified in the 13 groundwater-related outbreaks included Giardia, Salmonella, E. coli, Campylobacter and norovirus. Reports of outbreaks from private water supplies are not often reported or investigated and are suspected to be much more prevalent than investigation data indicates. Testing of private wells may also be avoided by homeowners due to concerns related to disclosure of potentially negative information during home sales.

Water surveillance data
From 1991-2004, USGS published an extensive report on the quality of water from domestic wells in the US. Approximately 2,100 wells from 48 states were analyzed for pH, major ions, nutrients, trace elements, radon, pesticides and VOCs. The presence of fecal indicator bacteria was also evaluated in 400 supplies. Twenty-three percent of 1,389 well samples contained one or more contaminants at a concentration greater than a human-health benchmark defined by the US EPA maximum contaminant levels (MCLs) or the USGS Health-Based Screening Levels. Thirteen percent of the 1,389 wells tested positive for at least one contaminant above an established MCL (see Figure 1). Most often, inorganic contaminants from natural sources were detected (i.e., arsenic, radon, uranium, fluoride) in addition to nitrate, which is primarily from man-made sources. Nearly eight percent of the 397 sampled wells tested positive for E. coli. About half of all the wells sampled contained at least one contaminant at a level above those recommended by the US EPA for the aesthetic quality of water. The implications of this data are that groundwater supplies are frequently contaminated and an important target for drinking water quality improvements or POU treatment.

Figure 1.Concentrations of at least one chemical contaminant were greater than a human-health benchmark in 23 percent of 1,389 domestic wells sampled in 25 principal aquifers. Microbial contaminants are not included.4 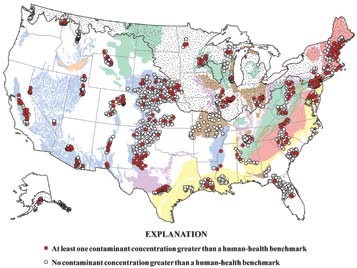 Protecting public health
Homeowners are primarily responsible for the quality of the drinking water from private supplies. Table 2 provides guidance on how to build, maintain and test a well in addition to recommended precautions to prevent contamination. Yearly test results should be compared with federal and state maximum contaminant levels, found at www.epa.gov/safewater/mcl.html. Registered state sanitarians, employed by local health departments, can usually advise homeowners on private well problems within the region.

Despite proper design and construction, some groundwater sources will be vulnerable to contaminants, whether occurring routinely or during peak, transient events. A wide variety of POU devices are available to address specific water treatment needs and as a safeguard against unsuspected events. A consumer document is available from US EPA that describes various POU technologies and the contaminants targeted for removal by each. This document further provides consumer-friendly information regarding NSF International, Underwriters Laboratories and the Water Quality Association’s process of certification for POU units that meet drinking water standards of the American National Standards Institute (ANSI), NSF and US EPA.

Survey and outbreak data suggest there are significant risks associated with consumption of untreated, private drinking water. This area of public health risk, however, is often overlooked in the development and promotion of mitigation strategies.