After a long wait, Wishing Well International Foundation (WWIF) has received official 501 (c)(3) non-profit status from the IRS, retroactive to September 2010 when the Foundation began operations. This milestone will allow WWIF to step up its fundraising efforts. A fundraiser drive has been started to complete two current projects (St. Paul Lutheran School–Delaney Hill village in Bagliga, Ghana and the Water Treatment Industry village of San Jose de Ulloa, Do- minican Republic) by the end of the year. All donations are tax deductible.

Aqua Perfect announced the company has merged with Quench, USA, which will take its regional business and create a true na- tional platform to serve customers in a more comprehensive manner. All staff remains, in addition to giving customers access to Quench’s broader array of products, com- petitive pricing and terms, more convenient billing features and streamlined services. Questions may be directed to Mike Thomas at (602) 757-5753.

Underwriters Laboratories Inc. (UL) announced that it has become one of the first organizations approved by US EPA to test for 28 contaminants in the third Unregulated Contaminant Monitoring Rule (UCMR 3). Every five years, in accordance with the Safe Drinking Water Act, the agency identifies a new list of contaminants that are suspected to occur in public water systems and may warrant regulation. The Unregulated Contaminant Monitoring program determines whether new regulations are needed to protect public health. Between January 2013 and December 2015, mandatory monitoring for UCMR 3 will be required for all public water systems serving more than 10,000 people, along with 800 select public water systems serving 10,000 or fewer people.

Jim Carroll, a respected author, columnist, media commentator and consultant who links future trends to innovation and creativity, will deliver the keynote address during the Opening General Session of WEFTEC 2012 this fall in New Orleans, LA. The opening session will kick off the Water Environment Federation’s (WEF) 85th annual technical exhibition and conference, a five-day event that is expected to draw thousands of water quality professionals and exhibitors to the New Orleans Convention Center from September 29 to October 3. The theme of this year’s Opening General Session will focus on A New Direction for WEF and tie into the organization’s new strategic direction that was announced earlier this year. Carroll’s presentation on innovation and transformation strategy is expected to frame the larger program theme and provide some tools and tips for how to achieve a higher level of success through significant, transformative change.

Specialty chemicals company LANXESS announced it will increase its prices globally for ion exchange resins and inorganic pigments, effective July 1. The Ion Exchange Resins business unit increased its prices for Lewatit ion exchange resins by an average of five percent. The precise adjustment will depend on resin grade and region.

The US Consumer Product Safety Commission, in cooperation with Watkins Manufacturing Corp. (dba Hot Spring Spas and Limelight Hot Tubs) of Vista, CA, announced a voluntary recall of Hot Spring Spas and Limelight Hot Tubs. A loose internal electrical connection of the spa heaters manufactured by Therm Products can overheat and ignite, posing a fire hazard. This recall includes the following 11 models with Therm Products No-Fault Water Heaters: Aria, Envoy, Flair, Glow, Grandee, Jetsetter, Prodigy, Pulse, Sovereign, Vanguard and Vista, manufactured from March to December 2011 and installed since October 2011. The date is represented by 2N, 3N, or 4N in the spa’s seven to 10 alpha-numeric serial code. The model name and serial code are printed on a label within the spa’s equipment compartment, located behind a removable panel on the side of the spa. Consumers should immediately stop using the recalled spas and shut off power to the spa unit, following instructions provided in the owner’s manual or by the Watkins-Therm Products Response Hotline. Consumers should contact the Watkins-Therm Products Response Hotline or their Watkins Manufacturing spa dealer for a free replacement heater and installation by a service technician. Watkins Manufacturing spa dealers are also contacting all affected owners to schedule the free installation of a replacement heater.

US EPA grant to Missouri college for water training

US EPA has awarded $181,638 to St. Louis Community College (STLCC), St. Louis, MO, for drinking water job training. US EPA Region 7 Administrator Karl Brooks said, “From EPA’s standpoint, it is essential that we groom talented and committed young people water fields in order to meet the need and shortage of experts in this important industry. The certification training is essential to successful job placement in this field.” The training meets requirements set by the Missouri Department of Natural Resources for drinking water treatment certification. The core curriculum focuses on the skills necessary for entry-level jobs at drinking water facilities. It includes sessions on water quality monitoring, green infrastructure, operations, maintenance, mathematics and drinking water regulations.

Calgon Carbon Corp. announced that the company and the city of Scottsdale, AZ have signed a 10-year contract to provide reactivation services for activated carbon used to treat the city’s drinking water. The value of the contract will depend upon the amount of spent activated carbon that is reactivated annually, which is expected to be approximately six million pounds. The company noted that it is the second 10-year reactivation services contract secured in Arizona this year. The first was with with the city of Phoenix in March. To support the needs of both cities, as well as other cities throughout the Southwest, Calgon is constructing a reactivation facility in Gila Bend, AZ, which is expected to be completed in 2013. It will be owned and operated by Calgon Carbon and will have an annual reactivation capacity of approximately 25 million pounds.

MIOX Corporation announced that their exclusive distributor, ONIKO, has installed a RIO M2 on-site mixed oxidant generator to disinfect the water treatment plant in the City of Kolomyia, Ukraine. The MIOX system will provide safe drinking water to the city’s 60,000 residents. The order represents the distributor’s first MIOX on-site disinfection generator. MIOX appointed ONIKO as its exclusive distributor for the territory of Ukraine in 2010, and recently expanded its territory in 2012 to include Belarus, Moldova and Armenia exclusively in addition to Russia, Hungary, Poland, Romania, Latvia, Lithuania and Estonia non-exclusively.

Oxnard, CA-based Puretec Industrial Water and Global Water, an international humanitarian organization, partnered to drill a well and bring clean water to the Serabu Village in Sierra Leone, in western Africa. By providing a new, safe water supply, this well has had a life-changing impact on 1,000 community members who live in the surrounding area. Purtec and Global Water have collaborated for many years, supporting water and sanitation projects in developing countries throughout the world.

The Bahrain Petroleum Company B.S.C. (BAPCO) has chosen GE to design and supply a membrane bioreactor into drinking (MBR) system for its oil refinery wastewater treatment plant in Sitra, near Manama. The project and the GE-supplied advanced water treatment technology will support BAPCO’s environmental leadership efforts to achieve the stringent wastewater quality levels specified by Bahrain’s General Directorate of Environment and Wildlife Protection regulation for wastewater discharge into the gulf. GE also will design the MBR system and provide support during its first five years of operation. GE’s water and process technologies business also has supplied water treatment chemicals for the BAPCO refinery.

According to IKON Marketing Consultants, India’s bottled water market will be worth around $2 billion (USD) during the current fiscal year (2012-13). This market has shown growth of 19 percent and will likely maintain that momentum in years to come, possibly reaching $3 billion by 2015. Major contributing factors for growth are the rise in spending capacity, rising population, increasing scarcity of pure drinking water and increasing awareness regarding health among Indian consumers, an increase in per capita consumption along with growing market segments for bulk water. In terms of volume, demand was estimated at around 532 million cases of small-pack product during 2010-11. South India is the biggest consumer of bottled water, representing more than 50 percent of the total market due to water-starved areas, followed by west India, which is home to major national brands. 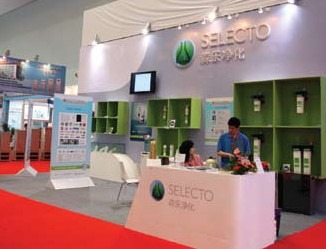 Paragon Water Systems reported that its attendance at Aquatech China was well-received and productive. Visitors showed significant interest in the company’s three-stage, high-flow Food Service Water Filter system and state-of-the-art POU bottle-less water coolers. Paragon has exhibited at Aquatech China for the last few years and will continue to exhibit there in the future. 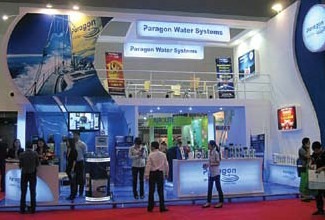