The Price of Drinking Water 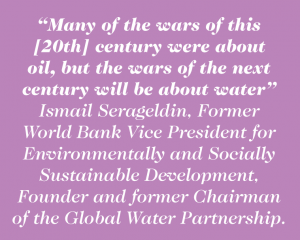 Warnings abound that future wars will be over water and not fossil fuels. The cost of water, however, remains extremely low in the United States, a fact that some market analysts say prevents conservation. The cost of drinking water worldwide varies considerably, as does per capita use. The following is a discussion of the global cost of drinking water, and potential drivers for use and conservation.

Water wars
Worldwide, there is an extensive history of violent conflicts over water; i.e., water wars. Search Google for book titles containing the term ‘water war’ and you’ll retrieve over 428,000 hits. From backyard disputes to national developmental debates to international weapons of war, waterways have been used to entertain and sustain, but also control and intimidate, populations.

For over 20 years, the Pacific Institute has been tracking events of international water conflicts. Their website provides detailed lists of water conflicts and an interactive map of conflicted regions related to events up until 2011. In the past decade, more than 69 regions with violent conflicts are listed, where outcomes included terror attacks, water blockages, supply destruction and frequently death. In 2002, soon after the infamous 9/11 attacks in the US, al-Qaida terrorists were reportedly studying water supplies and wastewater management practices in the US and other countries. Two years later, al-Qaida released a statement to a Saudi Arabian magazine that the organization did not rule out the poisoning of drinking water in Western cities. This threat led to a full-scale investigation of the country’s water-related vulnerabilities and an action plan for improving homeland security.

Other terrorist threats were not successfully averted. From 2003-2007, water was targeted in Sudan’s ongoing civil war, where bombings destroyed water wells and some wells were allegedly contaminated with poisons. In Darfur, wells were intentionally contaminated with black ink to deprive one camp with 27,000 displaced persons of the precious resource.

The lack of water is a key factor in encouraging terrorism due to the strain it puts on the health, security and stability of a population. Already volatile regions are also some of the most water-stressed. The Middle East reportedly has only one percent of the world’s fresh water shared among five percent of the world’s population. Population increases, shifting climatic patterns resulting in erratic water supplies and uncertain boundary distinctions are predicted to worsen water-related conflicts. 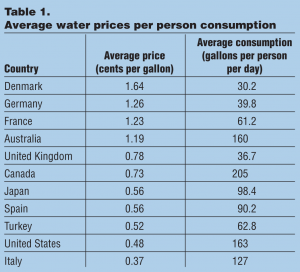 A recent article in the Journal of American Water Works Association focuses on the “ridiculously cheap” price of treated water supplies in the US. The author points out that while the price of water rose globally by almost seven percent from 2010 to 2011, and dramatically in some regions (i.e., Memphis, TN experienced a 93-percent increase in their combined water/wastewater rates over the past year), the price of water to US consumers is generally not representative of the costs incurred to supply it.

On average, US water costs citizens about four to five dollars per thousand gallons (one gallon= 2.8 liters) or about $30 per month. That’s less than a penny per gallon! The average US residential water bill is $474. US EPA estimates that billions of dollars are needed over the next 20 years to repair and maintain an aging distribution system, correlating to a need to more than double the average rate of water fees.

The trend is clear: the more you pay for water, the less likely you are to waste it. Countries that have a higher price per gallon tend to have the lowest rates of consumption (see Table 1). Thus, the price of water does not necessarily reflect the value of the resource, nor does it promote a motivation for conservation in many regions. Even if individuals pay more and use less, however, the majority of water consumption does not occur in the home but rather, in agricultural practices.

Drivers of water use and conservation
According to Worldometer, a real-time world statistics tallying tool run by an international team of developers, researchers and volunteers, the amount of water consumed this year in the world is 2,354,633 (in billions of liters and counting). With a worldwide population increase of approximately 80 million people per year and the demand for water increasing by 64 billion cubic meters per year (1 cubic meter = 1,000 liters), the threat of diminishing supply is clear. Urban populations are trending toward clusters around river basins around the world. Many regions do not have appropriate development and sustainability plans. In such cases, a use-it-or-lose-it mentality can result in significant conflicts for the downstream user and drive uses beyond current need. A major challenge is the need to manage the collaboration and cooperation between populations with regional resources that do not fit into defined political boundaries.

In advance of the 2012 Rio + 20 Corporate Sustainability Forum held in Brazil in June, The UN Global Compact and the Pacific Institute released the report, Water as a Casualty of Conflict: Threats to Business and Society in High-Risk Areas. This report builds on work from the United Nations Global Compact’s development of the Chief Executive Officers’ Water Mandate, which “seeks to make a positive impact with respect to the emerging global water crisis by mobilizing a critical mass of business leaders to advance water sustainability solutions—in partnership with the United Nations, civil society organizations, governments, and other stakeholders.” This public-private initiative builds on shared needs for sustainable water management for the future and provides a platform for problem identification and practical solutions. Involving multiple stakeholders in solution management is key for development of a comprehensive cooperative for the future.

Most individuals may be ignorant of the amount of water needed for survival. Beyond individual drinking, basic hygiene and food preparation uses, thousands of liters of water per capita per day are consumed to grow the food we eat. Overall, agriculture is far and above the primary user of water, yet even in developed regions, comprehensive resource management plans are limited (see Figure 1). In addition, the vast majority of water supplied to households is not used for drinking, cooking and bathing but for activities like landscaping and laundry where the quality, arguably, need not be as high as required for drinking (see Figure 2).

Figure 1. Average percent of worldwide water use by type 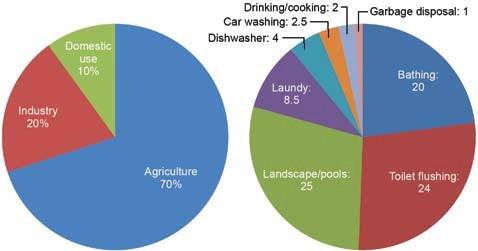 Figure 2. US average use of household water supply (gallons per person per day)

Conclusion
Managing water resources and promoting the protection of this global commodity is a complicated issue and one that promises to escalate. Moving into the future, most experts predict a deteriorating quality of water. Solutions range from decentralized sourcing to flow restrictions and more. Regardless of future management approaches, POU technologies will be necessary to address quality concerns and maintain a level of confidence in consumers. As evident by the $11 billion spent in the US each year on bottled water (and an estimated $60 billion a year globally), many consumers are already willing to pay for a higher quality of drinking water.