It sounds like a simple questiom: “How much water does it make?” But for POU RO systems, the question can be far from simple. In fact, the question is complex enough that a complete, detailed section of NSF/ANSI 58: Reverse Osmosis Drinking Water Treatment Systems is dedicated to the procedure required to obtain reproducible values for production rates of these systems.

Factors influencing daily production rate
Reverse osmosis systems use water pressure to force water through a semipermeable membrane, leaving behind most of the dissolved solids present in the incoming water. Along with this sophisticated technology comes a number of factors influencing just how much water will be forced through the membrane. In some ways, the situation is analogous to measuring fuel economy in automobiles. There are many factors that influence fuel economy—just a few of them include stopping and starting frequently, accelerating rapidly, operating air conditioning, properly maintaining the vehicle, and pulling a trailer. In light of these variables, US EPA has created a specific set of operating conditions under which the agency’s fuel economy values are determined. These operating conditions are representative, but do not cover extremes, so there are disclaimers associated with US EPA fuel economy ratings.

Transitioning this line of thinking to POU RO systems, one can consider the factors that influence water production rates:

Fixing the variables for consistent measurements
As we can see from our analogy to US EPA fuel economy ratings, when measured values are influenced by variables, it is important to fix 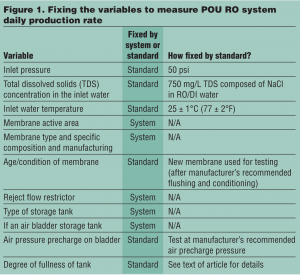 Actual performance may vary
Just as with actual fuel economy in automobiles, actual production rates obtained by consumers using POU RO systems may vary from the values determined under the methodology prescribed by NSF/ANSI 58. If consumers have TDS that is significantly different from 750 mg/L, or if they have water pressure that is not near 50 psi, or if they use only small amounts of water from the system during each use, they may have a production rate very different from that measured under the conditions in the standard. But the value provided by the standard method for measuring daily production rate—similar to the value afforded by US EPA’s method for measuring actual fuel economy in automobiles—is that it provides a production rate that can be reproducibly measured and used to compare one system to another in a standardized way. This can allow consumers to make more informed choices when selecting a POU RO system, just as it helps consumers to make more informed choices in automobiles.

Rick Andrew is the General Manager of NSF’s Drinking Water Treatment Units (POU/POE), ERS (Protocols), and Biosafety Cabinetry Programs. He has previously served as the Operations Manager, and prior to that, Technical Manager for the pro- gram. Andrew has a Bachelor’s Degree in chemistry and an MBA from the University of Michigan. He can be reached at (800) NSF-MARK or email: Andrew@nsf.org