Make My Day: The Eastwood Family Keeps Billings Out of Water Trouble 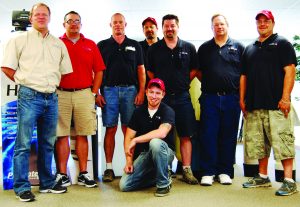 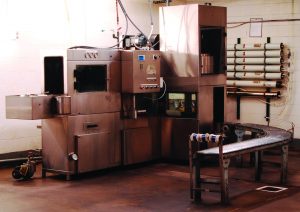 Many businesses start off strong but don’t last. In Montana, the strong ties of the Eastwood family move the company forward into yet another generation of water treatment professionals, with the fourth generation waiting in the wings. American Water Technologies is a family-owned, multi-generational business that employees 13 people (many of whom are family) to serve Montana’s Yellowstone, Musselshell, Carbon and Stillwater Counties, a roughly 75-mile-radius area that includes an approximate population of 175,000. With such a large territory, American Water Technologies fields a fleet of Sprinter service vehicles, of which they are very proud. They also feature mobile billboards to increase awareness of the company’s products and services. The company offers residential and commercial products and services, and bottled water home and office delivery within a 25-mile-radius service area.

Keeping it in the family
Michael S. ‘Mike’ Eastwood is the primary owner but also handles installation, sales and service. “And is the head janitor!” says company spokesman and youngest son Jason.  Mike’s wife Helen helps with everything, keeps everyone in line and makes sure they are all abreast of advances in technology. Jeff, the eldest son and a minority owner, handles commercial service as well as being a car-wash owner and distributor of car-wash equipment and supplies. Middle son Tim, also a minority owner, covers residential service, owns a car wash and his own Sidney, MT water treatment dealership. Jason is also minority owner, General Manager and handles sales. In addition, many other family members have worked for the company over the years as choice and mission fulfillment required, and young Rylie Eastwood appears to be headed for a sales position when the next generation comes of age. Chad Hilario, who has been with the firm since 1992, is the Office Manager and has worked his way up from the shop guy, delivery, bottling and general office work. Gregg Glasgow, all-around Service Manager and go-to guy since 1998, focuses on service and installation for residential and commercial clients. 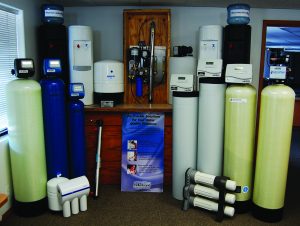 Beginning with  Mike’s first franchise in Hastings, NE in 1965, which he purchased after visiting with the owner of Culligan of Wheaton, MN, the family was all Culligan, earning numerous dealership and sales awards. From 1969 until 1979,  Mike served in various positions with Culligan International, including Vice President of Franchise and Market Development from 1975-1979. He purchased Culligan of Billings from friend and mentor Jack Nicholson, who started the business in 1941. From 1981-1984,  Mike had the opportunity of a lifetime: to experience Europe and turn around a business as Managing Director of Culligan of the United Kingdom. In 1984, he built his first self-service car wash in the area, and then in 1989, purchased Culligan of Sidney, MT. That was followed by an entry into the bottled water market in 1990. The growth of the business prompted a move from it’s original 4,000-square-foot building to a new 19,000-square-foot facility in 1993, the same year it installed an IBWA-award winning bottled water plant. “We’ve bottled water for several other dealers over the years, helping them grow and expand to have their own plants,” said Jason. “We now focus on home and office delivery of bottled water, as well as having our bottled water available at local Ace® hardware stores.”

Changing the game plan
In 2006, American Water Technologies began training with Hellenbrand products and in 2007, made the difficult but necessary decision to end it’s 66-year relationship with Culligan and embraced Hellenbrand as its primary vendor. “Changing from Culligan to Hellenbrand was a huge decision, one we thought about for a very long time,” said Jason. “The expense to change, in terms of marketing, truck decals, signage, bottled water labels, etc. was significant. A year later, we wished we had done it sooner.” Training has been an important part of the company’s success, starting with Culligan and continuing with Hellenbrand. Employees are also encouraged to take advantage of training opportunities offered locally and at national trade shows. Some have been so well trained that they have gone on to start their own dealerships.

Since the transition, American Water Technologies has won numerous dealership and sales awards. “Jeff, Pat, Rick and the entire staff are very helpful,” said Jason. “We are fortunate to not have the liability of having to service a huge variety of brands, as some of our competitors have had to change suppliers frequently. Hellenbrand has been a great partner. We have become even stronger in treating problem water solutions!”

Fixing the problems
“We have very good municipal water supplies with hardness around 14 grains,” said Jason. “Well water commonly has high hardness levels, high TDS and iron, with iron and sulfur problems becoming more prevalent. Water softeners and reverse osmosis do very well in this region. In some areas, TDS is 5,000 ppm and we face additional issues with pH, sulfate-reducing bacteria, iron-related bacteria, slime bacteria and high sulfates. For iron and sulfur, our solution is the Hellenbrand Iron Curtain system. For whole-house and commercial RO, we offer Watts systems. We typically do a Watts whole-house RO system monthly for TDS over 3,000 mg/L. Also, we frequently get calls to repair or improve another dealer’s problem water equipment solutions. The cheapest course is not usually the best in the long run. We give customers several options and try to educate them so they can choose the best approach for their issues.” A large part of Billings was on a well source that converted to a surface-water source, and the most of American Water Technology customers canceled service in a short period of time, without trying the new water. “We have gained most of them back but it took a very long time,” Jason said. “We offered free trials on water softeners to earn the business back; luckily they were already pre-plumbed!”

Vertical markets and the future
Over the years, as the industry changed, American Water Technologies has tried to keep pace and adapt accordingly. “Every day brings new customers and new challenges and sometimes even new solutions,” said Jason. “One of the most important solutions is improvements in metered water softeners. We believe electronic DI systems will be a huge change in the residential market, if they can lower the costs to the end customer. We have a growing number of people seeking to be ‘off the grid’ and rainwater harvesting treatment and systems that are compatible with solar power systems is on the rise.”

Not content to stand in place, the Eastwoods have embraced new technologies and new markets, though some didn’t pan out as planned. “We experimented with the hot tub business for about four years,” Jason said. “It seemed like a good match since we were always giving hot tub dealers and end customers water treatment advice. It proved to be an eye-opening experience. Now we are in the process of converting our older Culligan rentals to newer, more efficient Hellenbrand metered water softeners to save our customers salt, improve retention and reduce service calls. Additionally, our POU RO water coolers will continue to replace our large bottled water accounts.”

There is much to be said for following in the family footsteps, being open to new ideas and never giving up. “We have survived the ups and downs of the local economy and look forward to the next generation of water treatment. We continue to invest in our personnel, our building, our trucks and our equipment. And we hope to see even more advances in treatment technologies that we can incorporate into our offerings. We plan on staying out in front!”