The Scientist in Your Backyard

Have you ever dreamed of becoming a scientist but couldn’t envision sitting through all those boring math and chemistry courses? With today’s increasing technology and communication ease, citizen science groups are popping up all over the world. These amateur scientists are advancing nearly every aspect of research and producing databases with broader relevance than ever before realized.

What is citizen science?

According to the Citizen Scientists League- a 501 (c) (3) non-profit educational organization, citizen science is “a data-gathering technique that allows anyone to volunteer their time in support of scientific research projects.” Citizen science projects are everywhere; activities range from passive data processing (do you mind if Berkeley researchers borrow the hard drive on your home computer while you are at work?) to active data entry or field observations. In most cases, no prior experience is necessary; however, in some cases, citizens are asked to collect and analyze environmental samples that contribute to a global database of results. Sites may offer tutorials or other types of training to the volunteers, as needed.

With the advent of the Internet and cell phones, citizen science is possible in nearly every region of the planet – and well beyond – as you will read about related to NASA’s space exploration programs where you could be the first to view and characterize a newly identified galaxy. Many citizen science projects are utilizing cell phone technology and the widespread availability of smart phone apps to engage volunteers who can conduct scientific experiments while on-the-go.

Crowdsourcing is another tool associated with citizen science. Crowdsourcing involves placing an open call to a typically large group of people and letting the diversity of responses flow in. In an article entitled The Rise of Crowdsourcing, author Jeff Howe describes the shift from outsourcing jobs to India and China to new pool of cheap labor – everyday people, everywhere. Howe describes stock photo depositories (which takes advantage of the ability of a crowd to photograph and post pictures that are then openly available for use) as an example of crowdsourcing for pictures. YouTube is another example of crowdsourcing of videos.

In science, crowdsourcing uses similar concepts in which an open solicitation is presented to the general population, who are invited to contribute. Those contributions, however, develop into a deliberate, active participation where a common objective or endpoint is achieved.

Crowdsourcing, as well as citizen science, has been criticized for the possibility of faulty data due to malicious responders skewing information to fit a targeted agenda. Generally, the sheer number of respondents helps to dampen the impact of altered events but the possibility for unethical inputs is recognized. Critics have also raised concerns over the potential for a non-random sample, meaning that there may be something inherently similar about people who are likely to participate in such activities that may skew the types of responses collected. 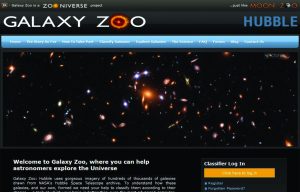 One innovative citizen science project, known as PiggyDemic, is linked into a social network (i.e., Facebook) to simulate human responses to a viral outbreak. This Facebook app monitors ‘infection’ among friends by following the user’s newsfeed to determine with whom they interact. Self-regulated behaviors can be observed and information gathered based on how people change behavioral patterns to protect themselves and their contacts. The information is then used to create mathematical models to describe the spread of a contagion, where patterns of social interaction, or avoidance, can be estimated.

Another pioneering citizen science project utilizes idleI Internet-connected home computers to analyze radio telescope data in the Search for Extraterrestrial Intelligence (SETI). In the absence of a supercomputer to analyze mounds of data from radio signals from space, SETI participants allow researchers to analyze data on tens of thousands of home computers via a screen-saver software that turns off immediately when the volunteer has need of their computer.

Applications in water quality
Projects utilizing citizen scientists for the collection of data related to water pollution are becoming widespread. Earlier this year, US EPA budgeted $125K (USD) to fund at least five citizen science grants aimed at identifying and mitigating local water pollution problems in New York City. The benefits of such a project expanded beyond data collection by soliciting creative solutions and providing community outreach activities simultaneously. Involving individuals in the identification of problems in their area as well as the solutions led to increased engagement, education and empowerment in the community.

World Water Monitoring Day is an international outreach program that teaches community members about water quality. This health-focused project encourages local residents to monitor their drinking water using provided test kits for sampling water temperature, pH, turbidity and dissolved oxygen. Led by the Water Environment Federation and the International Water Association, this field-based project is open to volunteers of all ages and requires only a minimum fee for the test kit. A mechanism is also available for kit donations. While officially celebrated each year on September 18, monitoring takes place from March 22 through December 31t. So far, over 37,000 participants from 25 countries have submitted test results, which are published annually.

NASA has also organized a water quality citizen science monitoring project in which volunteers test their local watershed for nitrogen as a measure of nutrient overload in natural waters. Sources of nitrogen include crop fertilizers, stormwater runoff, point-source pollution discharge or other inputs. Under the Earth Observatory citizen science program, a broader range of samples can be collected over a wider range of sites while minimizing data collection costs. While data is being collected, community members feel more engaged in the identification of problems and helping with solutions. Along the way, young scientists may be inspired to continue in the field of environmental exploration.

How can you be a part of research?

An easier question might be to ask, “How can I not take part?” There are so many opportunities to get involved. One need only search the Internet for a list of solicitations. In fact, you are likely an inadvertent citizen scientist already.

For example, did you know that Google has scientists monitoring the keywords you use to search the Internet? Monitoring of common terms related to flu symptoms has led to an early warning system for influenza outbreaks. Queries on Google related to influenza-like symptoms can identify epidemics in near real-time – with a reporting lag of about one day as compared to one-two weeks with traditional surveillance systems (i.e., local health departments or the US Centers for Disease Control and Prevention [CDC]). Rapid detection of infectious diseases provides the opportunity for greater response time for preventing the spread of such illnesses. This tool has obvious applications in homeland security and the tracking or prevention of a bioterror attack.

Scientific American maintains a list of citizen science projects related to energy and sustainability, evolution, health, mind and brain, space, technology and more. Some of these projects ask volunteers to go out and monitor the environment or observe the ecosystem. Others are designed to have you play computer games where thought processes, behaviors and attitudes can be evaluated.

While researching this article, I became engrossed in a ‘game’ of Galaxy Zoo, a citizen science project that asks volunteers to classify images of galaxies taken by NASA’s Hubble Space Telescope. Images of the hundreds of thousands of galaxies are shown to volunteers, who then identify how round, smooth, or bulgy the shape is. To date, more than 250,000 people have participated in the data mining.

Hopefully you will be inspired to take part in a citizen science project today. It’s simple. It’s fun. It’s science!