In the year since I wrote The Carbon Conundrum Activated Carbon Market Update (WC&P June 2011), several issues and items have impacted the global activated carbon market. This paper will review the major issues that have had an effect on the availability and pricing of activated carbon products.

The major activated carbon products used worldwide are mainly manufactured from coal (lignite, sub-bituminous, bituminous and anthracite), coconut-shell charcoal and wood (hard wood, soft wood and bamboo). Most carbons used in water filters are manufactured from coconut shell or coal. There are smaller niches of products made from peat, olive pits, fruit nut shells, palm shells, pecan shells, and macadamia nut shells. Coal pricing fluctuates by country with prices in USA and China being the most important. China has large coal industry and capacity but now is a net importer from the US, New Zealand and Australia. The reason coconut-shell charcoal and coal have such a big impact is that the ratio of raw material to finished activated carbon product is close to 3:1.

Stock and pricing issues
As mentioned in the previous article, raw materials used to manufacture activated carbons (such as coal and coconut-shell charcoal) have been subject to shortages and price increases, and those issues directly relate to the global pricing for activated carbon products. The shortages of coconut-shell charcoal have been alleviated somewhat and charcoal pricing has stabilized in the past 6-8 months, with no price increases since October/November 2011. Some US domestic coal carbon manufacturing had long-term coal contracts expire in the past year and some new contracts are at higher prices.

One event that had a major domino effect on activated carbon and activated carbon raw material supply was the March 2011 tsunami that hit Japan. After the initial tragedy, Japanese agencies realized they needed huge quantities of activated carbon for water treatment. The fear was that radioactive fallout would rain down and contaminate water sources that supply the reservoirs of many cities. Purchasing orders went out for thousands of metric tons of activated carbon. Coal-, coconut shell- and wood-based stocks of activated carbon in Asia were readily depleted and it took many months for stocks to build back up to normal levels. Many companies found they could not buy the quantities of carbons they normally bought from Asia, or if they could, the price had increased significantly. These companies were forced to look to other countries and sources; the Japan activated carbon demand situation is just now starting to fade a year after the event.

Ocean freight costs, Chinese anti-dumping duty on steam-activated carbon imported into the US and oil prices (coconut charcoal is an alternate fuel in Asia if oil is high priced) have had a steady impact on activated carbon prices in the US. Ocean freight costs have been relatively stable but do track oil prices. The US Commerce Department’s recently completed anti-dumping duty Preliminary Third Review portends higher duties for the April 2010 to March 2011 review period but final results will not be released until approximately October.

The fact there is again uncertainty in the amount of anti-dumping duty on Chinese carbons means less carbon may be imported into US in the next year. 2012 is the final year of the five-year anti-dumping duty; the whole policy is to undergo its sunset review soon. The duty is no small issue as it can range from zero percent to over $1 (USD)/lb. The amount of the anti-dumping duty depends upon the specific manufacturer in China and the data they did or did not submit to the Commerce Department for review. The normal tariff duty on activated carbon from China is 4.8 percent.

Production increased
The supply side of activated carbon has had several issues in the past few years but time marches on. Several new manufacturing plants have come to fruition or have been announced, and many plants have planned expansions or are in process of doing so now. New capacity was needed because the forecast for activated carbon demand greatly exceeded then-current production capacity. New coconut-shell activated carbon plants or major expansions have started production in India, the Philippines, Indonesia and Vietnam in the past year. Some consolidation occurred in September 2011, when a major coconut-shell carbon manufacturer based in Europe bought out a medium-sized coconut shell manufacturer (also based in Europe), which had a new manufacturing facility in Vietnam. 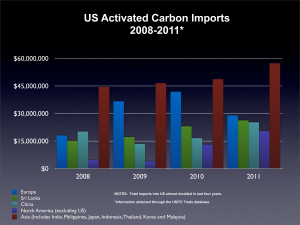 Market performance history
Total activated carbon imports for 2011 was $162 million (USD), a slight increase of only 5.3 percent over 2010 imports of $154 million. The primary reason for the small increase was the dramatic drop in German imports of coal activated carbon, which were previously needed as stopgap supply until more US production came online in 2011 for the rising flue gas market. 2010 imports were 18-percent higher than 2009 imports and preliminary data for 2012 imports indicate a 15-percent increase for January-February over same period in 2011. It suggests a record year for activated carbon imports into the US.

My usual advice still stands. Companies need a real relationship and partnership with activated carbon suppliers in order to maintain adequate quality supplies and have counsel concerning the correct activated carbons to use for their applications.

About the author
Ken Schaeffer, President of Carbon Resources, LLC, has over 30 years experience in the activated carbon industry. He holds a BA in biology and an MS in environmental science from the University of Texas at Dallas. Schaeffer is past Vice-Chairman of ASTM Committee on Activated Carbon D28 and past Vice-Chairman of the International Activated Carbon Manufacturers Association (IACMA). He is also on the Board of Directors of the Pacific Water Quality Association (PWQA). Schaeffer can be reached at ken@carbonresources.com or (760) 630-5724.