Hellenbrand, Inc. announces the addition of Dave Reinke to their Sales Team. He has 18 years of sales and management experience, most recently as National Account Manager for Milwaukee Electric Tool. Reinke brings a wealth of knowledge in the areas of sales, marketing, promotions, and training. He will in charge of growing the Hellenbrand dealer base in the Midwest.

Paragon Water Systems announced the relocation of Max S. Ma from its Zhongshan, China manufacturing facility to its corporate offices in Clearwater, FL. He will be managing new product design and engineering efforts while pursuing a Master’s Degree. Ma joined Paragon three years ago, bringing with him expertise in engineering, product design and development and structural innovation. He is fluent in both Chinese and English and received his Bachelor of Engineering Degree from the Dalian University of Technology.


Amsterdam RAI appointed Marieke Leenhouts Aquatech Product Manager, responsible for both Aquatech Amsterdam and WQA Aquatech USA. Her responsibilities encompass product development, key account management and the organization of Aquatech Amsterdam, the Aquatech Innovation Award and the AquaStages, as well as AquaJobs, AquaMatch and the international pipefitting competition. Previously, Leenhouts was Amsterdam RAI’s Press and PR Manager and Communications and PR Manager of the Aquatech exhibitions, the Aquaterra conference and International Water Week. Prior to joining the RAI she held various marketing and communication positions at MCS Public Relations, the Institute for International Research (IIR) and Randstad recruitment agency.

Mark G. Bertler has joined HydroNovation Inc. as Vice President of Sales and Marketing. Bertler has over 25 years of experience in the residential, commercial, industrial and municipal water and wastewater treatment markets.  His experience includes Vice President Business Development and Strategic Marketing at Pentair Water, VP/GM Water Treatment Group at Sta-Rite Industries and General Manager of the Midwest region at USFilter Corporation.

Waterlogic Plc appointed Sergio Leymarie President and CEO of Waterlogic USA, effective February 1. His team will provide finance, marketing and technical support and he will be responsible for commercializing the Waterlogic Firewall UV technology.

Tom Weekly was appointed Non-executive Chairman of Waterlogic’s US subsidiaries, (Waterlogic USA, innowave and CoolerSmart) effective January 1. He will help guide the business while also supporting the group M&A function in acquisition-led growth in North America. In his former role as CEO of Waterlogic USA, Weekly was instrumental in developing the company’s UV Firewall technology, mainly to the B2C markets.

Barry Bleahen joined Waterlogic USA as Vice President of Marketing, North America, responsible for continuing to further strengthen the Waterlogic brand in the region. Bill Logan will continue as CEO of the trade and direct businesses of innowave and CoolerSmart, supported by Bob Junk, as divisional VP of innowave.

The American Water Works Association (AWWA) Board of Directors announced the election of Jim Chaffee, a Wisconsin-based engineer with the global firm Jacobs, as the Association’s next President-elect. He will assume his new position at ACE12 in Dallas, TX in June and will begin his yearlong term as president in 2013. A registered Professional Engineer in six states, Chaffee earned his Bachelor’s Of Science Degree in civil engineering and his MBA from the University of Wisconsin system. He has developed his expertise in water quality, treatment and regulation over a career that has spanned more than 35 years. Chaffee currently provides technical and business strategy support for Jacobs’ North American infrastructure group. He is focused on highlighting opportunities AWWA offers for interaction among members of the water community and its leaders, as well as for personal and professional growth – particularly for young professionals. The board also elected four vice presidents: Reid Campbell, Director of Water Services for Halifax Water, Nova Scotia; Mark Cline, Project Engineer, Capital Projects,Charleston (S.C.) Water System; Dave Koch, Project Director, Black & Veatch, Great Lakes region and Rosemary Burbulis Smud, Senior Sales Engineer,American Ductile Iron Pipe, Sacramento, CA. The board also affirmed the appointment by the Executive Committee of Dave Rager to serve a four-year term as treasurer. One director-at-large was also elected. Sean Osborne, Project Manager, Haley and Ward, Inc., Waltham, MA was elected Director-at-large.

Mazzei Injector Company added Paul Overbeck as Vice President of Sales and Marketing and appointed Geoffrey Whynot as Chief Operating and Financial Officer. Overbeck brings vast experience in water and wastewater process technologies with him to Mazzei.  He previously served as Executive Director of both the International Ozone Association (IOA) and the International Ultraviolet Association (IUVA).  Fornerly, Overbeck was directly involved in the development of Mazzei’s GDT™ Process as President of GDT Corporation and was COO of Osmonics (now a part of GE Power & Water).

Geoffrey Whynot joined Mazzei in 2010 as its Chief Financial Officer and now will service in the dual capacity as the company’s COO and CFO. He has extensive finance and accounting background as CFO in a variety of industries, including manufacturing, technology, and communication companies both locally and nationally. 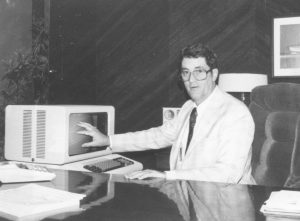 Founder of Enting Water passes away

Mel Entingh, Founder of Enting Water Conditioning, Inc., passed away on January 21 at the age of 82. He was born July 17, 1929 in Cleveland, OH and graduated from Chardon High School in Cleveland, where he participated in track and basketball. Engingh received a Bachelor’s Degree in 1956 from Cedarville University, where he also met his wife, Doris. While attending college, Entingh started selling water softeners and in 1965, founded Enting Water Conditioning, Inc. In 2000, he was awarded the Lifetime Achievement Award from the Water Quality Association in recognition of his numerous contributions to the industry. Entingh was also nominated for Entrepreneur of the Year from the Dayton Chamber of Commerce. In 1978, he obtained his pilot’s license and later became instrument rated. Entingh had a very strong faith, and sang in choirs, taught Sunday School and was a Sunday School Superintendent. Most recently, he was a member of Fairhaven Church in Centerville. Survivors include wife, Doris and five children: Dan Entingh (Grace), Yvonne Entingh, Andrea (Brian) Whitaker, Karen (Jim) Matson and Cheryl (Mark) Fleetwood, along with 21 grandchildren and nine great-grandchildren.