Introduction
Instead of using chlorine, drinking water utilities are gradually switching over to the use of chloramines—in particular, monochloramine—for disinfection of drinking water. Almost any activated carbon in POU devices will remove chlorine taste and odor, but special activated carbons are needed to remove chloramines. Chlorination has been an effective and most popular disinfection method in drinking water supplies. It inhibits the growth of microorganisms like bacteria and viruses, and in turn, saves lives from illnesses caused by such microbes in water. However, chlorine promptly reacts with natural organic matter (NOM) in water to form different disinfection byproducts (DBPs) like trihalomethanes (THMs) and haloacetic acids (HAAs), which are linked with to increased risks of cancer. In tap water, THMs are found to be responsible for as much as 17 percent of different cancers diagnosed every year in the US. To protect public health, US EPA has established safe maximum contaminant levels (MCLs) of 80 ppb and 60 ppb respectively for THMs and HAAs in drinking water, based on lifetime consumption.

Ozone, chlorine dioxide and chloramines are some of the disinfection alternatives to replace chlorine, or to be used as a secondary disinfectant in order to minimize chlorine’s adverse effects. Chloramines, especially monochloramine, have been used as a disinfectant in public water supplies for more than 70 years. Over the last decade, chloramines have increased in popularity among most water supply utilities. The primary reason for selecting chloramines is that they are stable for longer periods and take longer to decompose in utilities’ distribution systems. Also, they react less with organic compounds compared to chlorine and do not form THMs or HAAs. Although monochloramine has several advantages over chlorine—in particular lower concentrations of regulated DBPs (TTHM and HAA5)—chloramines may result in different unregulated DBPs, like nitroamines, iodo-trihalomethanes and iodo-acids, upon which considerable research by US EPA and other organizations is being carried out.

Monochloramine is not a naturally occurring constituent in drinking water. It is produced by adding ammonia to water containing free chlorine (HOCl or OCl, depending on the pH) at the first stage of chlorination. Hence, it has become an easy process for drinking water utilities to switch to chlormaines by adding ammonia after the first stage of chlorination. Ammonia reacts with chlorine and eliminates DBP formation:

According to US EPA, chloraminated water is safe to use for drinking, cooking, bathing and other household uses; however, health authorities recognize that people with compromised immune systems and skin problems should not drink chloraminated water. Because of their easy entry into the bloodstream through dialysis membranes and gills, chloramines may represent a risk for hemodialysis patients and fish, respectively. Once in the bloodstream, chloramines denature hemoglobin and cause hemolytic anemia. Chloramines can cause lead leaching from lead pipes, problems for steamers, coffee/tea machines and ice machines, and affect the taste of soft-drink beverages.1 To avoid any accidental use of chloramine-treated water, it is necessary to reduce the chloramine level in drinking water to as low as 0.5 ppm.

Reduction claims for chloramines
In general, chloramines are safe in drinking water in low dosages. US EPA has accepted chloramine as a disinfectant and recognized its ability to control THM formation, but has not addressed the toxicity of chloramines. As mentioned previously, there is still some discussion regarding the effect of traces of chloramines on long-term human health. For now, however, it is tested to NSF/ANSI 42, which is not a health claim. NSF/ANSI 42 requires reduction of a challenge of 3.0 ppm monochloramine to < 0.5 ppm in treated water. In chloramine-reduction testing under the NSF/ANSI 42 protocol, the test pressure is 60 psig (which is common to most of the contaminant reduction protocols) and may be increased up to a maximum of 90 psig in order to maintain the specified flowrate.

Unlike the case of chlorine disinfection, when chloramines are present, there are usually trace amounts of ammonia and chlorine in the water. Also, chloramines are hardly present in ionic form. As a result, and because of the low molecular weight, chloramines (in particular monochloramines) are difficult to remove from water by RO or water softening. Boiling and distillation cannot be used either. To improve taste and odor and remove the inherently toxic chloramines, adsorption by activated carbon is one of the most promising processes. The challenge of enhanced removal of chloramines and several other contaminants has led to attempting appropriate surface modification of carbon to produce catalytic carbon.

Chloramine reduction by carbon
Activated carbon (AC) is a widely used adsorbent in the water and air treatment industries due to its exceptionally high surface area, well-developed internal microporosity and the presence of a wide spectrum of surface functional groups. As an inert, porous support material, activated carbon is capable of distributing chemicals on its large internal surface, thus making them accessible to reactants (chloramines in this case).

Typically, activated carbon is used to remove any contaminant in water, including chlorine. Based on the type of carbon substrate used and the iodine value (the most commonly used term to represent the adsorption capacity, as iodine molecules in milligrams per gram of carbon sample), activated carbon has an affinity to remove a high volume of chlorine. Standard activated carbon, however, does not have a high affinity to reduce high volumes of chloramines. The ability of activated carbon to remove chlorine and chloramine from aqueous streams is generally well known. Improvements in removal of chloramine can be achieved by reducing the mean particle diameter of the carbon and by increasing the carbon bed contact time. More research on AC modification is gaining prominence due to the need to enable ACs to develop affinity for certain contaminants to cater for their reduction. In order to increase the kinetics to increase chloramine reduction, it is necessary to modify carbon surfaces and create catalytic sites. Such carbon is normally known as catalytic carbon.

Preparation and characterization of catalytic carbon
In general, activated carbon has no significant number of surface groups and it is deficient in basic elements. To induce AC affinity to chloramine reduction, the carbon is exposed to nitrogen-containing compounds such as ammonia, urea or the like at high temperature in order to dope the carbon matrix with nitrogen. At high temperatures ranging between 700 and 900°C, the graphitic layers become loose and the basal plane of activated carbon becomes susceptible to any reactive species. Under such conditions, the carbon matrix can easily be doped with specific catalytic species or create catalytic sites in the form of foreign elements or functional groups. In particular, for the catalytic reduction of chloramines and other similar acidic contaminants like hydrogen sulfide, the catalytic carbon is produced by doping with nitrogen and creating enormous basic functionalities. Figure 1 shows the comparative performance of carbon blocks made of surface-modified and unmodified (as-received) carbons. The results from the dynamic experiments under identical conditions confirm an increase in chloramine reduction capacity almost four times greater in the catalytic carbon block.

As can be seen in Table 1, the physisorption properties of the unmodified and the modified (i.e., catalytic) carbon are almost identical. Some pore widening is observed due to the activation effect during nitrogen-doping at high temperatures. In fact, the enhancement in the chloramine reduction capacity shown in Figure 1 is attributed to the presence of active nitrogen species in catalytic carbon. It is in the same context that others have also reported the kinetics as well as the capacity for chloramine removal are increased with increase in N-content.2 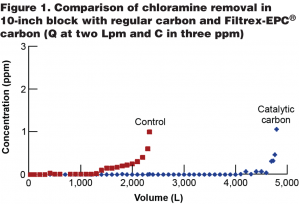 In general, catalytic carbon is produced by reaction with ammonia at temperatures as high as 750°C. The product (nitrogen-doped AC) is characterized mainly for the elemental (N) content and the extent of catalytic activity for the decomposition of hydrogen peroxide.

Chloramine reduction reaction mechanism
Catalytic carbon can significantly reduce chloramines in water. In fact, activated carbon does not adsorb chlor-amines, but rather removes them through its ability to act as a catalyst for the chemical decomposition or conversion of chloramines to innocuous chlorides in water. The theoretical reaction mechanism may be explained in the following two steps:

Catalytically active sites (C*) on activated carbon decompose chloramine molecules to result in the formation of a carbon oxide intermediate (CO*), which further decomposes the molecules to chloride. From the proposed mechanism, it is obvious that fine-mesh sizes of activated carbon will remove chloramines more efficiently because the finer particles have significantly greater surface areas and allow faster access to catalytic sites.

Summary
Drinking water utilities are gradually switching over to chloramine as the disinfectant of choice, instead of chlorine. Use of chloramines has an advantage of minimizing the formation of DBPs. Excess chloramine from drinking water is not effectively reduced with the use of standard activated carbon. This article has presented a brief summary of the mechanism of removing chloramines with surface-modified carbon commonly known as catalytic carbon.

1. Li, Cang. Trends and Effects of Chloramine in Drinking Water. WC&P, October 2011.
2. Hatch, Gary. Catalytic Activated Carbons for Dechlorination and Dechloramination: Do they really work and, if so, how? WC&P, March 2011.

About the author
Vivekanand Gaur is General Manager of the Technology and R&D operations at Filtrex Technologies Pvt. Ltd. Prior to joining Filtrex Group, his experience was in the area of surface modification of activated carbon and other sorbents applied in water and air purification. Gaur has pursued a Ph.D. Degree in chemical engineering and postdoctoral experience at the Center for Microfibrous Materials Manufacturing, Auburn University, AL. He can be reached at +91 9900067579 or email: vgaur@filtrex.co.in

About the company
Filtrex Technologies Pvt. Ltd. is a leading manufacturer of activated carbon and carbon block for water and air purification. The company’s R&D efforts extend to several surface modifications and have resulted in the development of various EPC carbon and blocks for higher claims and specific contaminants, including VOCs, lead and other heavy metals, chloramines, fluoride, bromate and nitrate. For more information, visit www.filtrextechnologies.com and contact the company at info@filtrextechnologies.com