Water: What We Worry About Most

Know what Americans worry about most? Illness? Natural disasters? Terrorism? Not exactly- in fact the catastrophic event that Americans worry about the most is economic collapse (63 percent recently reported economic collapse as their greatest fear). In numerous polls, some aspect of money loss tops the list of what Americans fear the most. When asked specifically about environmental issues of concern, water quality tops the worry list. The availability of affordable POU drinking water purification technologies, however, provides control for consumers to act on their fears of contaminated source and tap water supplies.

Why the worry?
Worry is defined as feeling or experiencing concern or anxiety; mental distress or agitation resulting from concern usually for something impending or anticipated. According to a November/December 2009 article in Scientific American Mind, psychologists believe that the act of worrying evolved as a “constructive problem-solving behavior”. This makes sense if worriers turn their concerns into actions that lead to an elimination of the offense. Building on the concept that concern leads to action, scientists further believe that chronic worrying ultimately satisfies a craving for control.

For some, having negative thoughts about potential events in the future are debilitating and result in excessive worrying, followed by adverse physical and mental health outcomes such as stress, depression, insomnia, heart disease, and a host of other related problems. Instead of inciting control, chronic worrying “hinders cognitive processing and also causes overstimulation of emotion- and fear-processing areas in the brain.” Left uncontrolled, such fears can lead to pathological conditions of depression. Considering only non-pathological worrying, one study found that 38 percent of college students and working adults reportedly worry at least once a day. The majority of respondents indicated that the duration of their worrying lasted less than 10 minutes. This frequency and level of worrying is considered normal. The good news is that between 48 and 83 percent of this worrying appears to lead to a problem-solving process, or a solution to remedy the concern. Therefore, scientists believe that normal worrying evolved as a way to help us to identify problems that naturally leads to beneficial, problem-solving behavior. Intuitively, playing on people’s fears has emerged as an effective marketing tool, leading people to buy products that address innate concerns.

Water worries
According to a recent Gallop Poll, Americans rank water quality issues highest among a list of nine environmental issues. Nearly 80 percent of Americans report having a “great deal” or “fair amount” of worry regarding toxic waste contamination of water; pollution of rivers, lakes and reservoirs and pollution of drinking water. In addition, according to the poll, 75 percent of the nation is fairly or greatly worried about maintenance of the fresh water supply for household needs. Air pollution concerns rank the next highest followed by plant and animal extinction, loss of tropical rain forests and loss of open spaces due to urban sprawl. Surprisingly, given all the media coverage, global warming came in last on the list of environmental concerns among Americans (Figure 1) 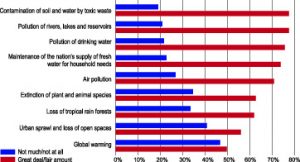 The degree of concern over any issue can fluctuate with time and current events or media focus. The data in the March 2011 Gallop Poll on environmental concerns was collected early in the month, prior to the tsunami and earthquake that led to the nuclear crisis in Japan. A repeated poll would likely measure raising American concerns over environmental (and water) contamination from nuclear power plants.5 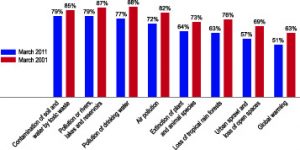 Although comparison of attitudes a decade ago with today shows a net decrease in worrying on all environmental problems polled (Figure 2), a similar poll conducted a year ago showed that concern over water quality issues remain unchanged- with more than three-quarters of the population worried about water. In general, the degree to which Americans worry about water fluctuates little with the category of “worried a great deal”, scoring above 53 percent over the last 20 years (Figure 3). 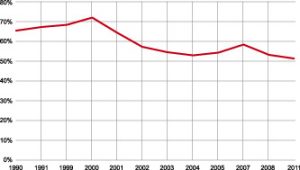 Americans are expected to continue worrying about water quality concerns, given the many recognized contaminants, monitoring and risk assessment studies reported. As psychological worry is expected to promote physical action, it is plausible that the POU drinking water treatment market will continue to be strong into the future.

Our industry mustn’t lose sight, however, of the many economic concerns among consumers. It is imperative that cost-effective water treatment options are available so that buyers have the ability to alleviate their water quality worries via the action of a POU treatment device purchase.

Just for fun
Want to see how much of a worrier you are? In 1990, Dr. Thomas Borkovec and his colleagues developed the Penn State Worry Questionnaire. You can utilize this questionnaire online in a self-assessment here: www.serene.me.uk/tests/pswq.pdf. (I won’t tell you my score but it is apparent that I need to worry less!)