Minimizing Risks of Legionella was presented at a conference held at Kefar Maccabiah – Ramat Gan – Israel. Approximately 200 participants attended, and eight lectures were given covering various aspects of the subject. Two lectures presenting the background to Legionnaire’s disease, as well as personal/water-provider responsibilities were given. There were also two presentations on the new Israeli guidelines for Legionella prevention, as well as innovative approaches for proper water system maintenance. In addition, various technologies for combating Legionella were presented. 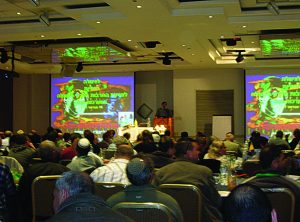 Dr. Kobi Moran from the Division of Epidemiology of Public Health Services – Israeli Ministry of Health – reviewed the history of recent awareness of this disease, including the outbreak in Philadelphia in 1976 at the Legionnaires conference, which was mentioned as the formative event that promoted public awareness. A comprehensive review, covering routes of transmission and epidemiological aspects, was also given. It was noted that the disease is more common in older men and it can attack throughout all seasons with an incubation time of between 2 to 19 days. A special reference to immunocompromised groups, including AIDS patients, patients with lung diseases and chronic smokers was made.  An overview of clinical symptoms, including similarity to flu, muscle pain, dry cough, severe pneumonia, low sodium serum and possible complications in the liver, kidneys and nervous system was given, as well as a survey of methods of diagnosis and prevention. 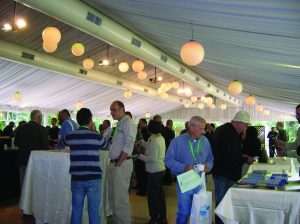 Deputy Inspector Gregory Rodstein of the Israeli Environmental Health Services presented an overview of the factors affecting the growth and dispersal of the bacteria. It was emphasized that acceptable concentrations of chlorine in drinking water are not sufficient for inactivation of Legionella and that it can be found in cold water as well. It was also noted that the acceptable temperature for proliferation in vitro ranging from 22°C – to 49°C (71.6 to 120.2°F) does not always reflect what happens in vivo, and the bacteria can also be found at 70°C (158°F).

The background for relevant developed world standards relating to required hot water temperatures was discussed, including the European standard which requires 55°C – 65°C (131 to 149°F) and the American standards, which require a 49°C – 60°C (120.2 to 140°F) range. In addition, it was noted that Australian, New Zealand, Canadian and some US states require a separation between the temperatures required for stored water (60°C) and the temperature in buildings (50°C).

An extensive review was also presented on the relationship between biofilms and the presence of Legionella. In general, Legionella and other pathogenic bacteria can hide and multiply in biofilms and might accumulate on the inner walls of the water supply system. They can also multiply in plumbing and air conditioning equipment, under conditions of high temperatures, and in the presence of accumulated organic matter, which give it advantages over other bacteria.

In the final section of the conference, lectures presenting technologies that can eliminate Legionella were given. One of these is based on the process of electrolysis of water, which creates disinfectants such as chlorine, hydrogen peroxide and ozone at the electrodes. This technology outputs a constant level of chlorine by converting chlorides to chlorine. Actual operating examples of this technology were displayed.

Another technology based on hydrogen peroxide and silver ions was presented. The development of this technology was a cooperative effort by an Israeli university and a hospital in Northern Israel, with support from the US EPA and the EU. Residual disinfection from this combination of hydrogen peroxide and silver ions retains its efficiency for several weeks. In addition, it has been shown that with this combination, a water temperature of 38°C (100.4°F)  is approximately 100 times more effective at inactivating Legionella than 18°C (64.4°F); furthermore, the combined hydrogen peroxide/silver  is stable up to 95°C (203°F). This is relevant for Legionella inactivation, as the silver can be attached to sinks and pipes, enabling a bacteriostatic effect. Case studies showing effective use of this technology in various hospitals in Israel were also presented.