John Brooks and John Foley started their water careers with an independent Culligan dealer, working in Santa Clarita, CA, from the early 1990s through 2003. They were hired as portable exchange soft water route drivers. Brooks actually trained Foley to deliver the route. In the cab of that route truck, they started a lifelong friendship. The training period was just a few weeks, but when Foley was given his own route, a friendly competition started between then to see who could add the most new accounts to their route. Before long, they were outselling the sales department and really starting to raise some eyebrows around the dealership. Owner Ken Farnsworth, who believed in their ability and encouraged them, was a key figure and mentor. “We really owe a lot of our early success to Ken,” said Foley. “He had the vision that started it all and we are all close friends to this day.” 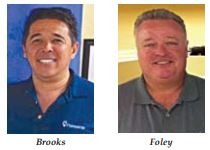 During the market consolidation (also called the ‘water wars’) of the late 90s, the independent dealership was purchased by Culligan Corporate, which was subsequently purchased by US Filter. Opportunities to learn and improve knowledge and sales skills were abundant. Eventually, Foley became the sales manager of the Santa Clarita dealership (Culligan of Sylmar), and Brooks took over the sales management position at Culligan of Las Vegas, a dealership that was really struggling at the time. Brooks did a phenomenal job of turning around the LV Culligan dealership for Culligan’s Company Owned Dealer Division (CODD), applying the same principles that had worked for the duo up to that point. Before long, they were regarded as top sales talent in the Culligan system. “I don’t think anyone knew they had handed the keys to a couple of guys who were hired as route drivers just five years before,” said Foley.

In 2002, Foley and Brooks began to see what the pitfalls were for a corporate sales professional and started to explore other alternatives. Brooks researched Las Vegas while Foley poked around Los Angeles to see what might be available. After a lot of research and a little hustling, they got an opportunity to purchase Rayne of Santa Monica due to the sudden passing of the owner, Bill Wallace, a highly regarded water treatment professional who had grown up in the Rayne organization. Wallace had purchased the business from William ‘Bill’ Fritzsche, one of Rayne’s original group of dealers and an early water industry pioneer, in 1997. Foley resigned as sales manager at Sylmar and the pair took over Rayne of Santa Monica in April of 2003. Brooks resigned at Culligan of Las Vegas and, at their request, waited a month for them to find a replacement. He joined Foley in Santa Monica as soon as he was able to move to Los Angeles and get settled, which took another month or two.

In 2006, the pair was given the opportunity to help a neighboring Rayne dealer retire. Fred and Sharon Kuppers, owners Rayne of the Valley assumed the business from Sharon’s father and legendary Rayne dealer Floyd Wells in the early 1970s. This was a management agreement that gave Brooks and Foley control of the day-to-day operation, but kept actual ownership of the business in the Kuppers’ name. It also gave them a larger facility and a second PE regeneration plant, which they viewed as a plus in brine-restriction land.

In 2007, RWS opted to close the Santa Monica office and consolidate the operation into the Valley office. This meant taking down a PE regeneration plant, moving all accounts and personnel about 15 miles up the coast, and merging two staffs and two separate dealer operation practices and philosophies. “The staff at the Valley office also came to the plate to help make us one big family and to welcome the Santa Monica staff into their new home,” said Foley. The move was completed by New Year’s Day, 2008.

“Over the years huge, corporations have raided the retail water treatment industry and have left a great deal of destruction in their wake, particularly in large markets like ours,” Foley said. “Thankfully most of the old timers who built businesses like ours did not live to see it. We want to pay homage to the guys who went before us. “To the Ken Farnsworths, who believed that we were better than we thought we were. To guys like Bill Wallace, Bill Fritzsche, Fred Kuppers and Floyd Wells, all of who blazed a trail for us to follow. We know that without the work that these gentlemen put in before us, our own success would not be possible.”

Today, Brooks and Foley both have college-aged children who also work in the business. “We are not sure if they will make their careers in the water business, but there is always the chance that they will one day take over and fire us, so we have to stay productive,” said Foley. “It is our goal to double the business twice in the next 10 years. That would position us revenue wise as the number one company in the region ahead of Micky Cs.”

“We’re sales guys,” Foley said. “We had no idea how to run a retail water business. The fact that we made it through the purchase of the first business surprised us, quite frankly. We had a lot of things to learn and we made our share of mistakes. The one thing we never stopped doing was selling. It was what we knew how to do and, as it turned out, it was enough to overcome our operational and administrative inexperience. By and by, we got better at the day to day running of the business, but we are still learning to this day. We owe a great deal of thanks to Office Manager Dora Rojas for her tireless efforts, Service Manger Eric Cedeno, commercial/industrial plumbing foreman Bill Carter and the technical development skills of Brandon Eqeskov. Without their hard work and dedication, we would not be where we are today”