When it ‘Raynes’ in Southern California 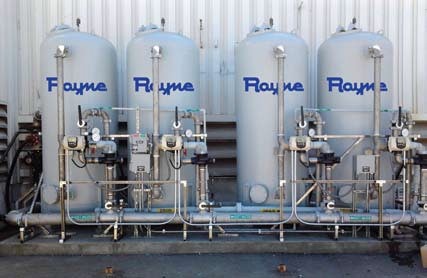 With a 50-year history and a combined customer base of more than 6,000 accounts, Rayne Water Systems, along with Rayne of the Valley, form the backbone of the RWS family of companies owned by John Brooks and John Foley. “Rayne Corporation has been very gracious (or patient) with us, and they’ve accepted that two rehabilitated Culligan men could also help them in certain areas,” Foley said. “We work well with the corporate team at Rayne, who are open to sharing ideas and exchanging best practices to help improve the organization as a whole. For example, our Puroserve whole-house RO system is now available through most Rayne dealers. At the same time, we have put our muscle behind Rayne’s revolutionary new EDI drinking water product, the LINX Evolution system.”

After Brooks and Foley acquired the Santa Monica Rayne franchise in 2004, it earned a reputation for being exceptionally well run by a fantastic staff. The existing customer base included some of the wealthiest people in the world, not to mention many entertainment industry notables. The service area also included some of the priciest real estate in the nation, including Beverly Hills and Bel Air, among other high-end enclaves. Business began to grow immediately and the staff at Santa Monica rallied behind their new owners. Brooks’ and Foley’s reputation as Culligan men was well known among the Santa Monica staff. Although there was some apprehension because of it, within a few weeks the employees realized that the new owners were committed to excellence, that they expected the same from their staff, and that they needed to buckle their seat belts, because the new owners liked to go fast. “Office Manager Dora Rojas and Service Professional Erik Cedeño are owed a great deal of credit for the long days and nights they put in,” said Foley. “They are two of the best people who could ever have your back when the chips are all in. Both are excellent individuals and fantastic employees who do not shy away from a challenge. They are blue chippers all the way.”

At the same time, Brooks and Foley had been working on the Puroserve Project (an alternative softener for brine-restricted areas) to treat the water in their own homes in Santa Clarita. It began as a side project, but when the results they got back were very encouraging, they decided to continue tinkering with it. Long-time friend and water treatment brother Bill Carter—God’s gift to gifted plumbers— stepped in and worked out the Puroserve’s more difficult bugs, building the first functional prototype, on his kitchen table. Carter’s prototype Puroserve unit, installed in Foley’s garage in 2005, is still running strong after six years.

Brandon Egeskov, hired in 2008, was previously Brooks’ service manager at Culligan Las Vegas, and has a gifted technical mind. He was able to take Carter’s working prototype, improve further on it, and then standardize the design for the production model (he has since configured two additional models). This required designing a new rack, developing a controller and standardizing sub-assemblies that include custom parts that they make in-house. Working together, Egeskov and Carter have continued to improve upon the early design. What has emerged is a bulletproof, turnkey whole-house RO system that they are very proud of. Puroserve was incorporated in October 2009 and RWS has since produced over 150 units, many of them installed in multi-million dollar homes and busy restaurant applications, and the results continue to impress.

Dealers must adapt!
“The entire water quality industry must be more responsible, particularly dealers who market to residential customers,” Foley said. “The days of hard-selling an over-priced system and a bad financing plan, and then slapping on an inefficient ion exchange softener are over. Increasing population and decreasing water supplies are causing serious concerns about salinity concentration in soil and groundwater. This is not going to go away. Today, brine restrictions are out west in California, but it is coming to your town, too. Dealers need to be more responsible, more creative and more sensitive to their markets. Their life actually depends on it. The western half of the country suffers from enormous water supply issues that will only be overcome by responsible, creative solutions.

“The exciting part about the retooling that the industry needs is that it is also the right thing to do. In fact, we have a responsibility to do it. Thankfully, there are technologies available to us that were not available in the past that will allow us to do it. All we have to do is learn how it works and be responsible with its use. Salt-free and low-salt systems that actually soften water are available to allow us to solve these problems, instead of contributing to them as we’ve done for the last 60-plus years.

“The upside is that because of that additional expertise that will be needed in the future, the landscape that will emerge is going to be a better, more respectable water treatment industry. The riffraff will no longer be able to give the rest of us a shady reputation. We should embrace change and view it as a reduction in the incompetent competition in the marketplace now, which is a big positive as far as we are concerned.”