Water Reuse The Challenges and Options

This planet has a sufficient quantity of water to meet the needs of every person on Earth. The problems are:

Although the hydrologic cycle (evaporation, condensation, precipitation and percolation) has provided fresh water for eons, this ’naturally treated’ water is often not of sufficient quality for many human activities, such as drinking, as well as many commercial and industrial applications. One of the most critical quality requirements for water used in human activities is for potable purposes: drinking and cooking. Traditionally, all of the water delivered to the residence in developed countries has been treated to drinking-water quality standards; however, because quality requirements for potable water are continually increasing— with no end in sight—the cost of producing this high quality water, especially when considering that less than two percent of the volume of water delivered to the home is used for drinking and culinary purposes, is being called into question.

Exacerbating this issue is the relatively recent identification of a potentially serious drinking water contamination issue. PCPPs (personal care and pharmaceutical products) end up in sewer wastewater which then becomes drinking water. Considering the plethora of chemicals washed off of the body during showers or baths, directed to the sewer from laundry, hand-washing applications and pharmaceutical (and other drug) products that are not completely metabolized in the body end up in the sewer, it is not surprising that the number of chemical compounds totals in the tens of thousands. The concentrations of these PCPP contaminants are so small that only recently have analytical methods been developed that are sensitive enough to identify them. These concentrations are in the parts per trillion (PPT); one PPT is roughly one second in 20,000 years. The unanswered question is whether these very small concentrations of a very large number of different kinds of organic chemicals have any effect on human health. Numerous laboratories, government agencies and university facilities are investigating this issue, but, if a link is found between PCPP contaminants and human health, the possibility that the municipal drinking water treatment facilities in use today can sufficiently reduce PCPP concentrations in drinking water is extremely remote.

One approach to addressing this problem is to provide water treatment at the residence, either at the point of entry or at faucets dedicated to drinking and cooking (point of use). This approach applies to other areas of water reuse; that is, treat any source of water at the location where it is to be used.

Residential water sources
What are the sources of water coming from or into a residence?

All of these water sources contain contaminants. The difference between each is the kind and degree of contamination. These dictate the treatment technologies required to restore its quality for an intended application.

Rainwater is generally less contaminated than the other sources. Because it contains dust, dissolved gases, microorganisms and debris from birds and animals, it is by no means pristine; however, it is generally very low in mineral concentration (dissolved salts less than 50 mg/L), which allows for typically inexpensive treatment, depending upon the intended application.

Because stormwater generally results from rainwater (or snowmelt), it is moderately low in contamination; however, this water has been in direct contact with road surfaces and other areas where it can pick up oil, tar, etc., as well as soil which contributes contaminants similar to those found in rivers.

Greywater can contain many of the PCPP contaminants discussed earlier in much more concentrated form. Most of these contaminants are organic chemicals, but it should be noted that potable water supplies are normally used as the feedwater for these activities, so there will be some mineral content also.

Blackwater presents a contaminant removal challenge because, in addition to the range of contaminants found in greywater, it also contains high biochemical oxygen demand (BOD), and a high concentration of microorganisms, some of which are pathenogenic. 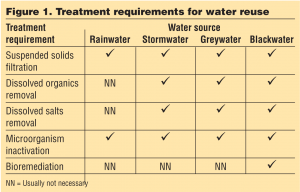 Figure 1 lists typical treatment requirements for reuse of water from various sources. The specific use of the treated water, in combination with the kind and concentration of contaminants in the feedwater, dictates the technologies required to meet the standard of use.

Suspended solids filtration
Virtually all of these sources are contaminated with suspended solids. This class of contaminants is most effectively removed by filtration, the act of forcing water through a medium capable of capturing the suspended contaminants. Filtration technology can range from a simple cartridge filter to large tanks containing mixed media (sand, garnet, anthracite, etc.). For very large quantity requirements, technologies such as flocculation, coagulation and sedimentation may also be utilized. The goal here is to produce treated water containing a sufficiently small concentration of suspended solids that could affect the quality of water in its intended use.

Dissolved organics removal
The removal of organic contaminants is much more complex than for suspended solids. This is because the number of organic contaminants that may be found in the water supply is so large that there is no single technology effective enough for the entire range of these contaminants. Oily waste, which may found in a stormwater supply, may exist as free (immiscible), emulsified or dissolved—often in all three forms. Free oils require special absorbents or coalescing technology, whereas emulsified and dissolved  oils can be removed with membrane technologies.

For the relatively small volumes of water associated with residences or other facilities where people work or are housed (office buildings, hospitals, care facilities, etc.), organic contaminants are most effectively removed utilizing adsorptive resins (including activated carbon), as well as ultrafiltration membrane technology. The adsorptive resins require regeneration or replacement to remove accumulated organic contaminants. UF membrane technology generates a ’concentrate’ stream containing a high concentration of the organic contamination. This stream must be discharged or further treated.

Dissolved salts removal
Dissolved minerals (or salts) are mostly inorganic ionic contaminants. Generally, the two most effective technologies for reducing these contaminants are ion exchange and the membrane technologies of nanofiltration (NF) and reverse osmosis (RO).

Ion exchange involves special resins capable of adsorbing specific types of ionic contaminants and exchanging them for other ions. For example, softening resins exchange sodium ions for hardness ions; cation resins exchange hydrogen ions for cations (e.g. sodium, calcium, etc.) and anion resins exchange hydroxyl ions for anions (e.g. chloride, sulfate, etc.). Ion exchange is a batch process, in that when the resin becomes saturated with ionic contaminants, the process has to be interrupted so that the resin can be chemically regenerated. These crossflow, pressure-driven membrane technologies reject salts utilizing a mechanism that is not fully understood. Some experts endorse the theory of pure water preferentially passing through the membrane; others attribute it to the effect of surface charges of the membrane polymer on the polarity of the water.

Nanofiltration can be considered ’loose’ reverse osmosis. It rejects dissolved ionic contaminants, but to a lesser degree than RO. NF membranes reject a higher percentage of multivalent salts than monovalent salts (for example, 99 versus 20 percent, respectively). These membranes have molecular weight cut-offs for non-ionic solids below 1,000 Daltons (see Figure 2).

Reverse osmosis produces the highest quality permeate of any pressure-driven membrane technology. Certain polymers will reject over 99 percent of all ionic solids, and have molecular weight cut-offs in the range of 50 to 100 Daltons (see Figure 3).

Microorganism innactivation
Microorganisms found in water supplies can be categorized as bacteria, viruses, protozoan cysts, algae and fungi. In the case of bacteria and viruses, the primary goal is to inactivate (kill) rather than actually remove them from the supply. As the others are physically larger, the goal is usually both inactivation and removal.

Inactivation usually involves a chemical disinfectant such as chlorine and possibly followed by filtration. The advantage of the chlorine-containing compounds (chlorine, chlorine dioxide, chloramines) is that they impart a residual capable of inhibiting microorganism regrowth. Ozone is an extremely effective microbial inactivation agent; however, it must be generated onsite and does not leave a residual. Ultraviolet irradiation is often used for bacteria and virus inactivation; however, it also does not leave a residual.

Bacteria are a particularly troublesome microorganism because they are viable, meaning they will reproduce in water supplies, and there are species capable of reproducing very rapidly under virtually any condition. Although disinfectants such as chlorine will not inactivate all bacterial species, they will keep the concentrations relatively low.

Bioremediation
The utilization of bacteria to degrade biological contaminants in water is perhaps the oldest and most widely used wastewater treatment technology. For example, virtually all municipal wastewater treatment plants take advantage of naturally occurring bacteria that break down sewage as part of their normal metabolic activity. In addition, wastewater from food-processing plants, rendering plants, etc. (typically high in BOD) are treated with bioremediation.

There are two distinct biodegradation processes in use today: aerobic and anaerobic. Aerobic utilizes air to encourage the activity of aerobic bacteria, whereas, the anaerobic process uses bacteria which only thrive in the absence of air. In general, the contaminants that are broken down as a result of biodegradation are classified as BOD, organic compounds that constitute the food for the bacteria.

The key to effective and efficient biodegradation processes is the creation and maintenance of a healthy population of thriving bacteria, known as the biomass. Typically, the biomass is either suspended in the wastewater in what is called a suspended- growth environment, or attached to a surface, known as fixed-film.

Within the suspended growth category, there are a number of design options including:

A relatively new development that allows direct reuse for some applications is membrane bioreactor (MBR) technology (see Figure 4). This involves the utilization of either an MF or UF membrane to treat the water in a bioremediation tank to remove total suspended solids (TSS), BOD and coliform bacteria. This treated water then can be used in many non-critical applications, or can be sent directly to an NF or RO system for polishing.

The wastewater is pumped against a membrane surface, which is selected to hold back suspended solids, pathogenic bacteria and a high percentage of BOD and chemical oxygen demand (COD). These are the organic contaminants that are consumed by the bioremediation bacteria. In Figure 5, a typical aerobic activated sludge process is compared to an MBR process operating on the same wastewater.

MBR advantages over traditional bioremediation processes are as follows:

Conclusions
To effectively reuse the available sources of water on this planet, it is important to understand the specific classes of contaminants in each source, and the treatment technology choices available today to remove them.

About the author
Peter S. Cartwright, P.E., CWS-VI, is President of Cartwright Consult- ing Company. He has been in the water treatment industry since 1974, has authored over 125 articles, presented over 125 lectures in conferences around the world and has been awarded three patents. He has chaired several WQA committees and task forces and received WQA’s Award of Merit. A member of WC&P Technical Review Committee since 1996, his expertise includes high-technology separation processes such as RO, UF, MF, UF electrodialysis, deionization, carbon adsorption, ozonation and distillation. Cartwright is also Technical Consultant to the Canadian Water Quality Association. He can be reached at (952) 854-4911; pscartwright@msn.com or www.cartwright-consulting.com.