Australia is the driest inhabited continent on Earth, with a climate city’s water. On the other hand, Perth’s largest reservoir, Serpentine Dam, has a that varies widely both geographically and year to year. Providing an adequate and reliable source of fresh water has become an important mandate, with seawater reverse osmosis (SWRO) desalination a key part of the solution. 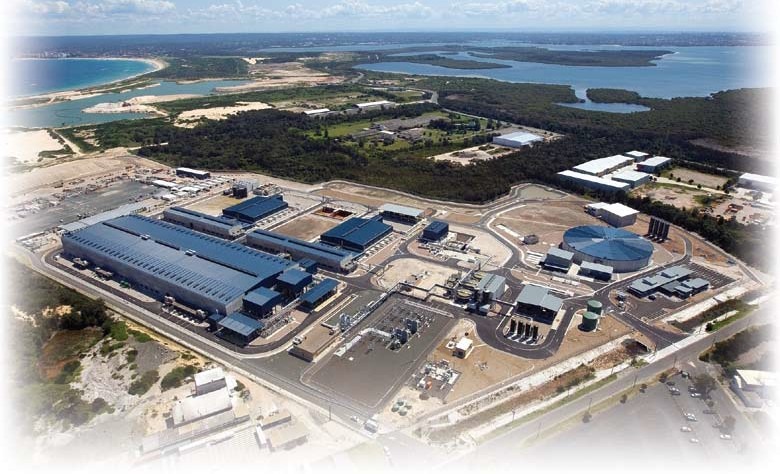 Desalination is the sustainable future solution
There are several reasons that SWRO provides a sustainable solution:

Energy
Reduction in energy consumption has been a priority for the global desalination industry, and significant strides have been made to lower the amount of energy required. In particular, reverse osmosis requires significantly less energy than thermal distillation. Energy use and consequent emissions are aspects of desalination that need to be addressed from an environmental perspective when designing desalination plants. A plant similar to Perth’s, even with energy recovery devices incorporated, will consume about 22 MW of electricity to produce about 37,000 acre- feet (45 million m3) of water per annum. This represents about 185 GWh (21.1 MW average) of energy per year, which equals the amount of electricity needed by about 30,000 households. 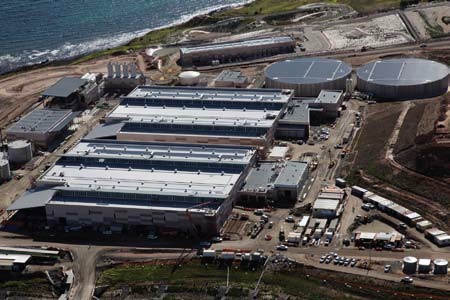 Adelaide Desalination Plant
Proposing carbon offsets (including tree planting) can be ex- pensive and can lock up water reserves if not planted in carefully chosen locations. The nuclear energy debate and solar-thermal technologies in Australia continue to develop. As the ongoing need for large-scale water sources increases, however, energy sources will continue to be a key part of the desalination equa- tion, and must be thought through carefully during planning. To put this in perspective, the energy required to permanently produce 17 percent of Perth’s water supply (i.e., enough water for over 300,000 people) is about a third of the energy of one Boeing jumbo jet flying continuously. A jumbo jet uses 80 MW of power for take off and 65 MW of power to cruise, as opposed to 22 MW of power for PSDP.

The trendsetter—Perth Seawater Desalination Plant
Western Australia has not only been very proactive in establishing a desalination program but also developed plants that have become global models for sustainability and use of renewable energy. In November 2006, in the face of the driest winter on record, the PSDP commenced delivering an annual capacity of 37,000 acre-feet (45 million m3) per annum of much-needed drink- ing water into the Integrated Water Supply Scheme (IWSS).

The PSDP, located at Kwinana, 19 miles south of Perth, Western Australia, has been heralded as a landmark in the development of the Australian water industry. It is a strong and worthy contender to be regarded as a world-leading model for future sustainable seawater desalination plants globally. The $368 million (AUD) plant (which includes $51 million of integration assets) has a peak capacity of 38 MGD. An 82-MW wind farm supplies over 272 GWh of energy per year to Perth’s electricity grid. PSDP consumes 185 GWh of energy per year from the grid, making it the world’s largest desalination plant using renewable energy. Coupling this energy source with the low specific energy consumption achieved from the plant’s novel design and incorporating isobaric energy recovery devices ensures that it is the world’s most energy-conscious plant. Considering the plant’s partial two-pass system, which produces a permeate of less than 100 mg/L TDS from a feedwater salinity of 35,000 mg/L, the achievement of a specific energy consumption of less than 13.63 kWh/kgal (3.6 kWh/m3) is remarkable.

PSDP has been engineered to ensure that backwash materials (solids) are disposed to landfill. This decision was made due to the presence of ferric sulphate and polydiallyldimethylammonium chloride (polyDADMAC—an organic coagulant) added to coagulate particulate and colloidal material from the influent seawater, and concerns about possible discoloration of the white sandy beaches, should this backwash be discharged at sea. Solid wastes from the in- take screens, media filters and lime system are captured in the wastewater treatment clarifier. The sludge from the clarifier is dewatered by centrifugation to a spadeable cake for disposal to landfill. Offsite environmental management considerations include salt content, quantity and handling quality of the sludge. The discharge products that have been carefully managed include the seawater intake screen washings, clarified backwash effluent from the media filtration plant, RO plant seawater concentrate stream, neutralized RO plant chemical clean wastewater and RO plant flushing water.

Other unique aspects of the plant include the partial second pass, included to ensure a bromide content of less than 0.1 mg/L in the product water, and provision of a sludge thickener to ensure dewatered sludge can be safely transported and disposed of to landfill. In order to meet strict environmental conditions, the seawater concentrate is re- turned 514 yards into the ocean via a 40-port diffuser, with nozzles spaced at 5.5-yard intervals to ensure total mixing of seawater concentrate within 55 yards of each side of the last 220 yards of pipeline. The discharge, therefore, is effectively no different from the naturally occurring seawater in terms of its salinity and meets the Australian Environmental Protection Authority’s stringent criteria. Notably, the additional cost for the average residential customer of $36 per annum (less than $0.63 per week) as stated in July 2004, has come to fruition as originally estimated.

Taking all the above factors into account and considering the plant’s small physical footprint (on land and in the sea), this plant is one of the most sustainable water sources in Australia, and is the first water source in Australia to wholly cater to the triple bottom line: economic, social and environmental factors. PSDP was the winner of the GWI World Membrane Desalination Plant of the Year 2007.

Southern Seawater Desalination Plant
The Southern Seawater Desalination Plant (SSDP) is the second major SWRO desalination plant owned by the Water Corporation of Western Australia and is the largest SWRO desalination plant in the region. The project produces 40,000 acre-feet (50 million m3) per annum (Stage 1), and Stage 2 (currently under construction) will increase the total supply to 80,000 acre-feet (100 million m3) per annum to Perth’s IWSS. This plant utilizes membrane pretreatment, which in most instances is achieved without the use of chemicals and coagulants, making it possible to discharge backwash into the ocean.

Australia’s big six
A brief review of some of the desalination plants in Australia follows:

Western Australia
The Perth Seawater Desalination Plant, (PSDP) is described above. Its success led to the Water Corporation constructing a second new plant, the Southern Seawater Desalination Plant (SSDP), with a capacity of 40 mgd. It was recently constructed by a Spanish consortium, Technicas Reunidas S.A/Valoriza Agua. The plant is currently being duplicated. Similar to PSDP, it will be powered by energy from renewable sources. A third plant north of Perth is envisaged in the future.

New South Wales
Sydney Water has built one of the world’s largest RO desalination plants. All ancillary components were sized to provide capacity for 132 mgd of water; i.e., about a third of Sydney’s drinking water needs. The site at the Kurnell Peninsula, south of Botany Bay, already hosts an oil refinery. The first 61- MGD stage was completed in 2010 and includes a nine-mile pipeline under Botany Bay. The total cost was approximately $2 billion. The Blue Water Joint Venture, consisting of John Holland Group Pty. Ltd. and Veolia Water, designed and built the plant while Veolia Water continues to operate and maintain it, which is owned by Sydney Water. Sydney Water, in a similar model to Water Corporation of Western Australia, will purchase renewable energy from a wind farm, equivalent to the energy consumed in the plant, resulting in no net greenhouse gas emissions as a result of operation. This plant was the winner of the GWI World Membrane Desalination Plant of the Year 2011.

Victoria
The State Government committed to building a 120-MGD desalination plant to ensure reliable supplies for southern Vic- toria. The site near Wonthaggi, Gippsland, with intakes and saline outfalls into Bass Strait (rather than into the Port Phillip or Westernport Bays, or the Surf Coast), is being delivered by the private sector as a build-own-operate-transfer (BOOT) project using Victoria’s Public Private Partnerships framework. Expressions of interest were sought in late 2008 and construction of the plant was awarded to AquaSure, a consortium consisting of Suez Environment, Degremont, Thiess and Macquarie Capital Group. Construction commenced in 2009 and the plant is expected to start delivering water by the middle of 2012. The $3.5 billion project includes a 53-mile pipeline to connect the plant to Melbourne’s Cardinia Reservoir east of the city. It will be capable of providing around a third of Melbourne’s annual water supply. The plant is estimated to use about 90 MW of power, the equivalent of which will be purchased from renewable energy sources.

South Australia
An 80-MGD desalination plant for Adelaide is under construction on a site in the former Mobil refinery site at Port Stanvac on St Vincent Gulf, south of the city. Following independent operation of a pilot plant, expressions of interest were sought in 2008 and the $1.8-billion design-build-operate project was awarded to Adelaide Aqua, a consortium of Acciona, Agua, McConnell Dowell, Abigroup and Trility Australia. The plant will deliver first water at the end of 2011 and be completed and commissioned in 2012.

Conclusions
It may be said that desalination has come of age in Australia. The Federal and Western Australian Governments have recognized this by the establishment of a $20 million dollars National Centre of Excellence in Desalination based at Murdoch University in Perth. To say that investment in desalination technology in Australia over the past five years has been astonishing is almost an understatement. A combination of RO technological advancement, unit cost reduction, climate change, long-term drought, population growth and government inaction in the late 1990s and early 2000s has resulted in an expected increase in water supplied by desalination during the ten-year period from 2005 to 2015 from less than 26 MGD to more than 475 MGD. This includes the ‘Big Six’ plants that supply Perth, Brisbane, Sydney, Adelaide and Melbourne. In 2011, Australia was chosen to host the International Desalination Association’s World Congress, which was held in Perth in September.

About the author
Gary Crisp is Global Business Leader: Desalination, GHD Pty. Ltd. and a Director of the International Desalination Association. He can be reached at gary.crisp@ghd.com.