A group of University of Cape Town researchers is investigating a new water treatment method called eutectic freeze crystallization (EFC). The technique is applicable to many wastewater streams, not just streams with calcium sulphate and sodium sulphate. For example, a textile wastewater stream is currently being reviewed.

Eutectic freeze crystallization works on the principle that, when a waste stream is cooled to a specific temperature, ice as well as salt will crystallize out of solution. The ice, being less dense than the salt, floats to the top of the crystallizer, while the salt, being denser, sinks to the bottom. Also, the process of ice crystallization excludes most impurities, thus resulting in pure water when melted. The acidity of the stream is usually not a problem in an EFC process. It may affect equipment (such as probes) and choice of material for the crystallizer, but does not affect the actual operation of the process. The presence of iron in the solution will either crystallize out as an iron-type salt (probably iron sulphate) or it will remain in solution.

The project was started in 2007 and has shown very promising results. For example, previous work on EFC showed that a waste stream from the coal mining industry in South Africa could be reduced by as much as 96 percent and that pure calcium sulphate, pure sodium sulphate and pure water could also be produced. The proposed process is presented in Figure 1. Reduction in the initial brine stream is represented via the width of the lines, which are proportional to the mass flowrate of each stream. The first stage, preconcentration, removes the majority of the water as ice. The second stage, which would require a much smaller crystallizer, then removes most of the remainder of the water, as well as calcium sulphate salt. The third stage produces sodium sulphate along with ice and a small waste stream. 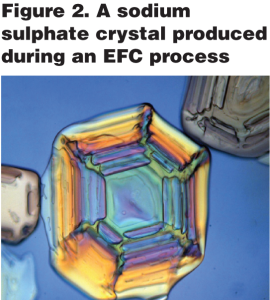 EFC is less energy intensive than an evaporative process since the heat of vaporization is six times higher than the heat of crystallization. The capital cost of an EFC process is currently more expensive than an evaporative process, but it is envisioned that this cost will decrease in the same way that more evolved technologies like reverse osmosis have over the last three decades.

A major focus of the research group, and specifically this project, is to treat wastewater as a resource. A treatment process needs to focus on both the solid waste component (salts) as well as the liquid component (water) of the wastewater stream. This is the only way a truly sustainable and environmentally friendly water treatment process will be achieved. Eutectic freeze crystallization does exactly this, thus making the technology very attractive because of this potential to recover value from a waste stream. For example, the abundance of water resources held up in old and abandoned mines can not only provide a new source of water, but these water resources can also provide a new source of various salt products, such as calcium sulphate, sodium sulphate and sodium chloride.

A 3,000 L/day pilot plant has recently been commissioned in South Africa based on the findings from this project. To date, the pilot plant has successfully produced pure water and sodium sulphate from a wastewater stream contaminated with oils and organics.

About the authors
Alison Lewis graduated with a BSc (Chem. Eng.), MSc (Chem. Eng.) and Ph.D. from the University of Cape Town. She is a registered Professional Engineer and a Fellow of the South African Academy of Engineering. Lewis is Director of the Crystallization and Precipitation Research Unit, an accredited research unit at the University of Cape Town. The Research Unit works nationally and internationally as specialists in the field of industrial crystallization and precipitation. Water and brine treatment have become an increasingly important focus of the Unit’s activities.

Dyllon Randall, a recent Ph.D. graduate from the University of Cape Town, is a Research Officer at the same university. His current research focuses on using crystallization and precipitation to treat wastewaters, particularly in the mining industry of South Africa. Randall’s ultimate goal is to get people to start thinking of waste as a resource.

About the company
The University of Cape Town (UCT), which was founded in 1829, is South Africa’s oldest university and is one of Africa’s leading teaching and research institutions. In 2009, 23,500 students were enrolled at UCT with almost 30 percent registered for postgraduate studies. The university was ranked 107th in the 2010 Times Higher Education World University Rankings.

About the process
EFC research, which has attracted increasingly positive attention, has been featured in magazine articles and on local television. It has garnered interest from major mining companies, both in South Africa and abroad. A recently published article in Desalination, “A case study for treating a reverse osmosis brine using Eutectic Freeze Crystallization – approaching a zero waste process,” won the best paper award at the South African Institution of Chemical Engineers Chemical Technology Awards. The project was also nominated and subsequently highly commended at the British Institute of Chemical Engineers in November 2010.