Trends and Effects of Chloramine in Drinking Water

Introduction
Chlorine is the most common drinking water disinfectant and has been extensively used by municipal water treatment plants to inactivate microorganisms, including pathogens that can cause waterborne diseases, such as typhoid, cholera and dysentery. In the early 1970s, free chlorine (as molecular chlorine, Cl2; hypochlorous acid, HOCl and hypochlorite ion, OCl-) was found to interact with natural organic matter (NOM) in drinking water supplies to form products known as disinfection byproducts (DBPs), such as trihalomethanes (THMs). Some of these products have been linked to cancer in laboratory animals and may cause other adverse health effects. In tap water, THMs are believed to be responsible for as much as 17 percent of the bladder cancers diagnosed each year in the US. To protect public health, US EPA has established disinfection byproduct regulations (see Table 1). 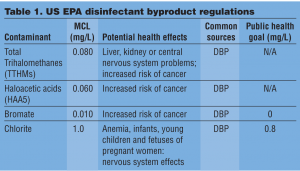 Best available technology for controlling regulated DBPs
Chloramines refer to three compounds: mono-, di- and tri-chloramine. The most common and effective chloramine used as a disinfectant is monochloramine, an inorganic compound with the formula NH2Cl. It has been used by water utilities since 1918 (Denver, CO). Chloramine use is closely regulated and the current US EPA maximum contaminant level (MCL) is four mg/L (or ppm). Since chloramine is not commercially available, it must be generated onsite by adding ammonia to drinking water containing chlorine. Because chloramine is a weaker disinfectant compared to free chlorine, it is chemically more stable and remains more effective in the distribution system over a longer period of time. More importantly, chloramine produces much lower levels of DBPs in drinking water. Chloramine is currently considered to be the best available technology for controlling the formation of regulated DBPs. This is why many water utilities have switched to chloramine in order to meet US EPA regulations.

Pros and cons of chloramine use
The choice of chlorine versus chloramine as a secondary disinfectant varies among water utilities based upon their needs. US EPA does not require water utilities to use chloramines, but a state agency or other authority typically has requirements as to which disinfectant should be used. Use of chloramines as a secondary disinfectant has been increasing over the last decade. Although monochloramine has several advantages over chlorine—especially lowering concentrations of regulated DBPs, such as TTHM and HAA5—chloramine-treated water may contain different unregulated DBPs, including nitroamines, iodo-trihalomethanes and iodo-acids. Regardless of free chlorine or chloramine used, the types and concentrations of DBPs vary from each water treatment utility and also from day to day. US EPA and other organizations are currently doing research on the unregulated DBPs.

Using chloramine has some other disadvantages as well, including lead release from metal corrosion (a case in Washington, DC in 2004), biofilms and nitrification. According to US EPA, chloraminated water is safe to use for drinking, cooking, bathing and other household uses. Health authorities recognize, however, that some populations may have chemical sensitivity to chloramines, which could lead to side effects such as skin problems. People with weak immune systems, including transplant patients and people with AIDS, should not drink chloraminated water. Chloramine must be removed prior to use in kidney dialysis machines. Ammonia can be converted by naturally occurring bacteria through nitrification to form nitrite and nitrate that can be harmful to infants. Chloramine can impact the taste of a soft-drink beverage. Chloramine can also cause plumbing problems. As mentioned before, chloramines can cause lead leaching from lead pipes, lead soldering and brass plumbing parts. It reacts with ordinary buna-N rubber hoses and gaskets and causes swelling, which may produce black or greasy particles. It may cause pinhole pitting in copper pipes. In restaurant applications, corrosive chloraminated water could cause problems for steamers, coffee/tea machines and ice machines. Furthermore, chloramine is toxic to fish, amphibians and water-based reptiles and marine invertebrates. The pros and cons of chloramine use are summarized in Table 2.

Chloramine filtration
Chloramine is more difficult to remove from drinking water than chlorine. Products that reduce free chlorine may not be effective to remove chloramines, but products that are known to reduce chloramines will remove free chlorine. Other methods, such as boiling water, allowing water to sit at room temperature and reverse osmosis also do not remove chloramine very effectively from drinking water. Activated carbon filtration systems are widely used to effectively remove chloramine by catalytic conversion. As Dr. Gary Hatch pointed out in Catalytic Activated Carbons for Dechlorination and Dechloramination: Do they really work and, if so, how? (WC&P, March 2011) some standard carbons and catalytic carbons are more effective for removing chloramines than others. NSF/ANSI Standard 42 covers chloramine reduction from three ppm to less than 0.5 ppm. Many products have been tested and certified by NSF or WQA.

Water utilities using chloramine
Under the Freedom of Information Act (FOIA), a list of public water utilities that use chloramines as a secondary disinfectant was obtained from US EPA under HQFOI-00227-11. Information in the Safe Drinking Water Information System was supplied by primary agencies in compliance with the quarterly reporting requirements. Two reports for 2007 and 2010 were obtained from the Office of Ground Water and Drinking Water. In the 2007 and 2010 reports, information included the water utility name, ID number, telephone number and mailing address. The report also included information about the region, state and population served. Comparison of US EPA chloramine use data for 2007 and 2010, analyzed in terms of number of water utilities and population served, is presented in Table 3.

Using the current US population (312 million), about 22 percent of Americans use drinking water containing chloramine. 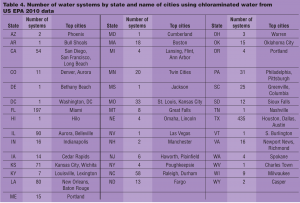 In order to create a map to show where chloraminated drinking water can be found and the area of coverage, state population and not number of water systems was used. Total state populations was retrieved from the US Census Bureau website, www.census.gov; the most current data is from 2009. The percentage of the population served with chloraminated water has been calculated and summarized in Table 5. 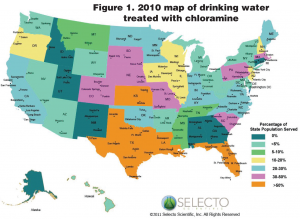 The percentage of population served for each state has been used to create a map (Figure 1). 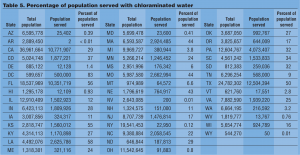 Cang Li, Ph.D., is Director of Research and Development/Quality Control at Selecto Scientific, Inc., Suwanee, GA. Since joining Selecto Scientific in 1999, his work has included research and development in water treatment products and purification media. Dr. Li earned a Bachelor of Science Degree in chemistry from Peking University in China, a Master of Science Degree in analytical chemistry from the Chinese Academy of Sciences in Beijing, and his Ph.D. in physical-inorganic chemistry from Boston University in 1991. He was also a post-Doctoral Fellow at the Institute of Paper Science and Technology at Georgia Institute of Technology, and is a member of the American Chemical Society. He holds one US patent, has authored or co-authored 23 articles in scientific journals and has given several technical presentations.

About the company
For more than two decades, Selecto Scientific has provided innovative technologies and advanced products for a host of applications, including water filtration, pharma, biotech, beverage and fuel cells.