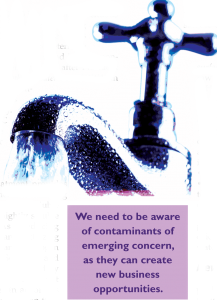 Granular activated carbons (GAC) have made tremendous improvements to drinking water supplies by removing contaminants. US EPA helped facilitate the use of this medium after it conducted national surveys to determine what contaminants were in drinking water and later demonstrated that GAC could remove them one day after President Gerald R. Ford signed the Safe Drinking Water Act (SDWA) in 19741. GAC isotherms were used to demonstrate that contaminating organics could be removed cost-effectively by GAC. While not the only solution, GAC may be considered a baseline treatment option in a multi-barrier approach.

Benefits of GAC use
Activated carbon (AC) treatment provides several simultaneous improvements to drinking water quality. It best removes water-insoluble organics and organics that are slightly soluble through physical adsorption. As a reducing agent, it removes residual disinfectants (which are oxidizing agents), such as chlorine, ozone and hydrogen peroxide by chemical reactions. Sediment and water insoluble materials are also removed by AC filtration. Large particulate matter cannot squeeze between GAC granules in adsorbers and are trapped. Trapped particulates can be removed mechanically. These demonstrated water treatment benefits have made AC use in this application its largest commercial market sector. AC has an amazing list of applications and some new applications are expected in the future. Besides AC use to purify potable water supplies, it can be reactivated and recycled many times, an important consideration for US EPA, making it a very cost-effective option. Unused AC may cost about $1.50 (USD) per pound and reactivated costs about $0.75 per pound. These are example costs, but they are realistic. GAC purchase cost depends on the amount purchased, type and grade, supply-and-demand at the time of purchase, long-term contracts in place, quality of purchased media and purchasing unused or re-activated GAC. Additional costs may include transportation and change-out costs and negotiation and planning skills.

PPCP concerns
Pharmaceuticals and personal care products (PPCPs) are trace contaminants with potential human health effects and environmental problems,2 and they are an emerging water quality issue. (Trace is used to indicate parts per trillion (ppt) and parts per billion or ppb.)3 Recently, due to improvements in analytics, liquid chromatography interfaced to mass spectrometers, scientists have in 2011 detected additional PPCPs in the drinking water at many major cities. They enter the water supply through the present municipal wastewater treatment plants. These plants do not use AC to treat wastewater before putting water back into the environment. Since municipalities do not treat for PPCPs and other soluble organics and inorganics, like phosphorus and nitrogen compounds, they allow these contaminants to remain in partially treated wastewater that is discharged into surface water bodies, which may be another city’s raw water supply. PPCPs include:

This is not a new potential drinking water problem, though there is a growing body of evidence that drugs are ending up in drinking water.4,5

A starting point
New Orleans, LA was the landmark case study that called the activated carbon industry to arms. The 1974 SDWA national survey was an outgrowth of prior studies and research which found that a number of trace organic chemicals, which are suspected carcinogens (cancer causing), are present in small concentrations in the drinking water supplies of New Orleans, LA, which is on the Mississippi River and Cincinnati, OH, on the Ohio River.1 As the terminus for the Mississippi River and its tributaries, New Orleans received a composite of municipal wastewater, industrial discharges and agricultural chemicals run-off. Many chemicals found their way into the city’s drinking water distribution system. Standard chlorination treatment for disinfection increased concentrations of carcinogenic trihalomethanes (THMs) and other halogenated byproducts in the drinking water supply.

End-of-pipe control
Environmental regulators often mandate controls of toxic contaminants at the source of pollution, at the end of the pipe. The higher the concentration of water contaminants, the higher the loading capacity on AC, which makes it work better. In the case of trace PPCPs, the end of the pipe is municipal wastewater treatment plant. The fastest way (in the short term) for citizens to protect themselves against these PPCP compounds is POU and POE controls at residential areas and business offices that receive municipal potable water. In the long-term, treatment at the source needs to be considered.

Tertiary wastewater treatment
The upstream source of many drinking water plants is municipal wastewater plants, the major source of PPCP water pollution, which calls for tertiary treatment with AC. These plants presently provide primary and secondary treatment, before putting wastewater back into rivers or oceans. Tertiary AC municipal treatment offers to help remove the water-soluble environmental compounds before release of the water back to the environment. AC works best against high concentrations. Thus, adding this sorbent at end-of-pipe at these facilities seems to make economic and human and animal health sense. Most of these plants have the space to accommodate classical activated carbon adsorber technology.

Municipal wastewater plants are the major source of Great Lakes water pollution. The US EPA Small Business Innovative Research Grant program has called for solicitations to remediate the water quality problem7, which has been recognized for several years.8 The dead zone in the Gulf of Mexico has also been attributed to Mississippi’s composite water quality. The pollution comes from chemical fertilizer escaping farm fields, sewage treatment plant discharges, and polluted runoff from cities, which are located along the entire length of the Mississippi River. The dead zone, which forms every summer and is caused by high levels of nitrogen and phosphorus pollution draining from the Mississippi River watershed, is an area where there is not enough oxygen in the water to support marine life. The pollution stimulates excessive growth of algae, or blooms. When dying algae decays, it uses up most of the oxygen in the water, which chokes marine life.

Common sense citizen control
Some PPCPs entering the water cycle can be controlled or eliminated by common sense. Households need to flush less down the toilet and send more to landfills in a safe form of disposal.9 Simply adding unused or outdated prescription medications to coffee grounds and putting them in closed, original safety containers is easy to do. (We do not recommend grinding drugs, because they can become airborne and be more dangerous to children and pets.) Public awareness and understanding can lead to implementation. This is key to safe disposal of PPCPs and their decrease in drinking water supplies; product manufacturers should provide more information about proper disposal. In addition, AC is used in some pharmaceutical containers to control obnoxious odor, which a small sachet of AC in the container could control.

Conclusion
It is hard to anticipate future US EPA actions against PPCP problems to protect the public. The Safe Drinking Water Act gives them the tools to initiate analytical national surveys and initiate clean-up rules in the Federal Register. These US EPA actions will take time and they are unpredictable outcomes. Awareness is an important part of problem solving. Since the public is willing to spend money for personal protection and quality drinking water, it behooves the POU/POE industry to develop and market filters to solve this and related trace issues.

About the authors
Henry Nowicki, Ph.D., MBA, is President of PACS, which serves over 800+ clients and has been awarded nine government grants and contracts for R&D on activated carbon projects. He provides the introductory course for PACS activated carbon school titled Activated Carbon Adsorption: Principles, Practices, and Opportunities. Nowicki serves on WC&P’s Technical Review Committee and the editorial review committee of Filtration News. He can be reached at (724) 457-6576 or www.pacslabs.com or e-mail Henry@pacslabs.com.

Barbara Sherman, MS is Operations Manager and Lab Technician for PACS Laboratories. She handles questions on PACS courses and conferences.