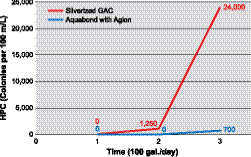 In the June issue, we inadvertently reversed the legend in Figure 3 on page 28 in Activated Carbon: Modern Advances for an Ancient Technology. The correct graphic is below. Also, the final section of the article, About the company, did not include the author’s company information: “Sciessent, located in Wakefield, MA, is a leader in providing customized solutions that enhance the value of partners’ products. Sciessent’s Agion and Agion Active brands are based on silver and other naturally occurring elements and have been incorporated into a wide range of consumer, industrial and healthcare products, including cell phones, shoes, keyboards, water filters, medical catheters and ice machines. For more information about Sciessent, please visit www.sciessent.com; for the Agion brand, visit www.agion-tech.com and www.agionactive.com and follow the Agion brand’s exciting consumer campaign on Facebook and/or Twitter.” Omnipure contributed data to Sciessent but was not involved in the writing of this article.

AXEON Water Technologies recently collaborated with German UF specialists Inge Watertechnologies AG to help launch a new innovative water treatment product and refine the design of AXEON PVC pressure vessels. AXEON’s engineering team aided in the design and production of Inge’s ‘plug-and-work’ multibore UF modules and pressure housings, and helped Inge develop a compact module that can simply be inserted into a standard RO pressure vessel and be conveniently replaced when necessary. AXEON also announced the expansion of its customer service and technical support divisions. In addition, the engineering department, which plays a pivotal role in the evaluation and testing of products, has also been expanded, to ensure enhanced product quality and consistency while also enabling new product development to meet the needs of diverse water treatment applications.

Calgon seminar for US Senate

Calgon Carbon Corporation recently conducted a technical information seminar for the US Senate Environment and Public Works Committee. The company presented technical and cost information to the Committee’s professional staff related to the use of and applications for activated carbon, UV light disinfection, ion exchange technology systems, and a wide variety of other biological and physical water treatment technologies.

Salt not so bad after all?

The cardiovascular benefits of salt restriction remain unproven on the basis of currently available evidence, authors of a systematic review concluded. Medpage Today reviewed a report in which Rod S. Taylor, Ph.D., of Peninsula College of Medicine and Dentistry in Exeter, England and co-authors concluded, “There is still insufficient power to exclude clinically important effects of reduced dietary salt on mortality or cardiovascular morbidity in normotensive or hypertensive populations.” The accumulation of clinical-trial data on 6,500 participants failed to produce a statistically significant outcome for hypertensive or normotensive individuals with respect to overall mortality or cardiovascular morbidity. Moreover, salt restriction was associated with an increased mortality risk in patients with congestive heart failure (CHF), according to a report in the Cochrane Database of Systematic Reviews.

Thermo Fisher Scientific Inc. announced a highly sensitive ICP-MS solution for chromium measurement in drinking water, including the potentially carcinogenic hexavalent chromium (chromium VI). The XSERIES 2 ICP-MS is able to detect levels of chromium VI at less than 0.01 parts per billion (ppb), which is significantly lower than the current US EPA guidelines of 0.5 ppb. Implementation of the system will provide laboratories with fast and accurate measurement of the element to ensure confident compliance with the EPA standards.

Researchers at Rice University are spinning a bit of nano-based magic to create ‘coated sand’ that has enhanced properties for water purification. The breakthrough may benefit developing countries where more than a billion people lack clean drinking water. Beds of sand are commonly used throughout the world to filter drinking water. Particle size of sand and surface modifications determine the efficiency in removing contaminants from water. The researchers’ technique makes use of graphite oxide, a product in the chemical exfoliation process of graphite (AKA pencil lead) that leads to single-atom sheets known as graphene via subsequent reduction. A team from the Rice lab of Professor Pulickel Ajayan published a report in the American Chemical Society journal Applied Materials and Interfaces describing a process to coat coarse grains of sand in graphite oxide; the resulting material is several times more efficient at removing contaminants than sand alone.

The 72nd International Water Conference® (IWC) will be held in Orlando Florida, November 13-17. The conference features a 2.5-day technical program, exhibit hall and info-share suites. Extended-learning continuing education workshops (CEW) will also be offered following the conference. Attendees may earn as many as 32 professional development hours to satisfy continuing education requirements for Professional Engineer Licensure. The technical program consists of 20 different sessions on topics such as produced (frac) water, nutrient removal, power plant applications, and deionization as well as many others. The 2011 IWC Exhibit Hall will feature more than 60 displays for continued educational and networking opportunities. Additionally, IWC has the long-standing tradition of Info-Share suites, where attendees can extend learning opportunities. Full Registration is available with the early bird rate of $425 until October 14. Please visit www.eswp.com/water for more information about the conference.

NSF International Strategic Registrations, Ltd. (NSF-ISR) has acquired AQA International LLC and AQA’s current international operations. As a result, NSF-ISR and AQA-certified companies will benefit from a wider global footprint in China, Korea, India, Turkey and Malaysia, a larger North American presence and a broader array of service offerings. The acquisition is part of NSF’s ongoing strategic growth plan for its management systems registrations division (NSF-ISR).  The combination of NSF-ISR and AQA enables the organization to provide increased support to its expanding customer base in North America and globally. Jointly, the two combine to form one of the world’s leading providers of management systems registrations.

HaloSource, Inc. announced that it has established HaloSource Water Purification Importações Ltda, a wholly owned Brazilian subsidiary, to manufacture, import and distribute its HaloPure® powered components, cartridges and devices for partners in Brazil. The opportunity for the company in Brazil is sizeable. The Latin American market household water purification was estimated at $400 million (USD), growing at an annual rate of 15 per cent, according to research published by Frost & Sullivan in 2005.

Univar Inc. has signed a distribution agreement with the Koch Membrane Systems trading division of Koch Chemical Technology Group Ltd. (KMS) for their RO products in Italy. Univar will distribute KMS’ range of RO elements that are used in water treatment and water reuse. RO membranes are used to purify brackish water and seawater so that it can be used as drinking water or industrial process water, removing salt and other substances at a molecular level.

Water21 announced that the European Commission has produced a report that looks at the various claims of toxicity and negative effects from use of fluoride and largely finds them unproven, while casting doubt on the effectiveness of adding fluoride to water. The review from the Directorate-General for Health and Consumers looks at new evidence on the hazard profile, health effects and human exposure to fluoride and the fluoridating agents of drinking water. The Scientific Committee on Health and Environmental Risks (SCHER), noted that limited evidence from epidemiological studies points to adverse health effects on top of the recognized dental and bone fluorosis, including carcinogenicity, neurotoxicity and reproductive toxicity following systemic exposure, but added that ‘the application of the general rules of the weight-of-evidence approach indicates that these observations cannot be unequivocally substantiated’. The study calls the evidence for the protective effect of fluoride toothpaste ‘strong’ but calls the evidence for systemic application via drinking water ‘less convincing’.