Based on the excitement created by Aquatech China 2011, this month’s column will be a recap of the event. Held in Shanghai, China from June 1-3, this event continues to grow in size, quality and the number of POU and POE manufacturers exhibiting. Organizer Amsterdam RAI first brought their successful Aquatech brand to China’s fragmented water trade show market four years ago, and it has quickly become the market leader for POU/POE trade shows in Asia.

The first Aquatech China show in 2008 attracted around 300 exhibitors, whereas this year’s event included more than 800. Having attended the show for the last three years, I have seen this evolution first hand. In fact, after extensive use of temporary structures outside the main hall to house many exhibitors for whom there was no more room in the main hall for the last two years, the show will finally move from its current home at the Shanghai Exhibition Center to the larger venue of the World Expo Center in 2012. Statistics from Amsterdam RAI capture the overall significant growth of this event (see Figure 1). Although figures for attendance for this year’s show have not yet been released, I am positive based on my own observations of the jam-packed show floor that last year’s record attendance has been eclipsed.

Trends in 2011
One of the trends in 2011, in addition to the ever-growing number of exhibitors, is increasing globalization of the exhibitors and the discussion at the show. Aquatech China is no longer just about Chinese component manufacturers seeking to do export business with North American OEMs, nor is it just about manufacturers looking to sell to the growing Chinese POU/POE market (although it surely covers both of these areas), but rather the show is about global opportunities. It includes everything from Australian OEMs seeking reliable, quality suppliers, to Chinese manufacturers looking for sales and distribution partners in Europe, to discussions regarding the new certification requirements in Brazil. Increasingly, organizations are seeking relationships and acquisitions to help them source, manufacture and sell products globally. And because of its manufacturing prominence and large market opportunity, China seems to be planted squarely in the center of the discussion.

Anecdotal evidence of increasing globalization can be seen based on NSF’s experience at this show, and the increasingly international participation and impact. A decade ago, when NSF first began exploring the China market, the organization’s presence at a Chinese trade show included a few people from its US headquarters and a Chinese agent to provide facilitation and language interpretation services.

At Aquatech China 2011, the NSF attendees included representatives from five different countries, all of whom contributed very directly with various market knowledge and language skills to interact with different exhibitors and attendees from around Asia and the world. The General Manager of NSF Shanghai Co., a joint venture between NSF and SAC of Shanghai created in 2006 and offering CNCA approved certification services in China, as well as several of his staff, served as the China presence and the core of the NSF trade show team. Asian Operations Managing Director from the NSF Bangkok office worked with exhibitors from around Asia. NSF Korea’s Country Manager attended to interact with Korean exhibitors and attendees. Taiwanese manufacturers were served by NSF’s Sales Manager for Greater China, operating out of Taiwan. And last but not least, yours truly was present to offer whatever advice I could (although my Chinese language skills are decidedly lacking). See Figure 2.

NSF’s approach and experience at the show was not unique. Other organizations tended to be similarly staffed per the scope of their operations internationally, with participation from multiple regions as opposed to strictly Chinese staff or only US visitors. International participation may have been facilitated by various partner organizations, company divisions, or local sales agents.

Another trend I noticed is the increasing quality of the exhibits and products displayed in them. There are fewer and fewer very small booths with seemingly random assortments of 10-inch (254 mm) filter cartridges, and more and more sophisticated displays of uniquely designed products incorporating the latest technology. Although this transition began prior to the 2008 launch of the Aquatech China shows, nonetheless the pace of this transition has amazed me. Most of the visitors who have attended several of the shows express the common opinion that in Shanghai, the pace of modernization is rapid and the economy is booming.

China – a bright future for POU/POE
It would have been difficult to attend Aquatech China 2011 and decide not to return in 2012. The expansion of the show beyond the capacity of the hall for exhibitors, the floor so crowded with attendees at times that it was difficult to move through, the global nature of the exhibitors, attendees, products and discussions, and the opportunities in China and beyond all provided compelling reasons why Aquatech China 2011 was an excellent trade show for POU/POE. It certainly left me seeing that POU/POE is a growth industry that has incredible possibilities in the next few years and beyond. See you next year at Aquatech China 2012!

About the author
Rick Andrew is the Operations Manager of the NSF Drinking Water Treatment Units Program. Prior to joining NSF, his previous experience was in the area of analytical and environmental chemistry consulting. Andrew has a bachelor’s degree in chemistry and an MBA from the University of Michigan. He can be reached at (800) NSF-MARK or email: Andrew@nsf.org.

Figure 2: A Sampling of NSF Attendees at Aquatech China 2011 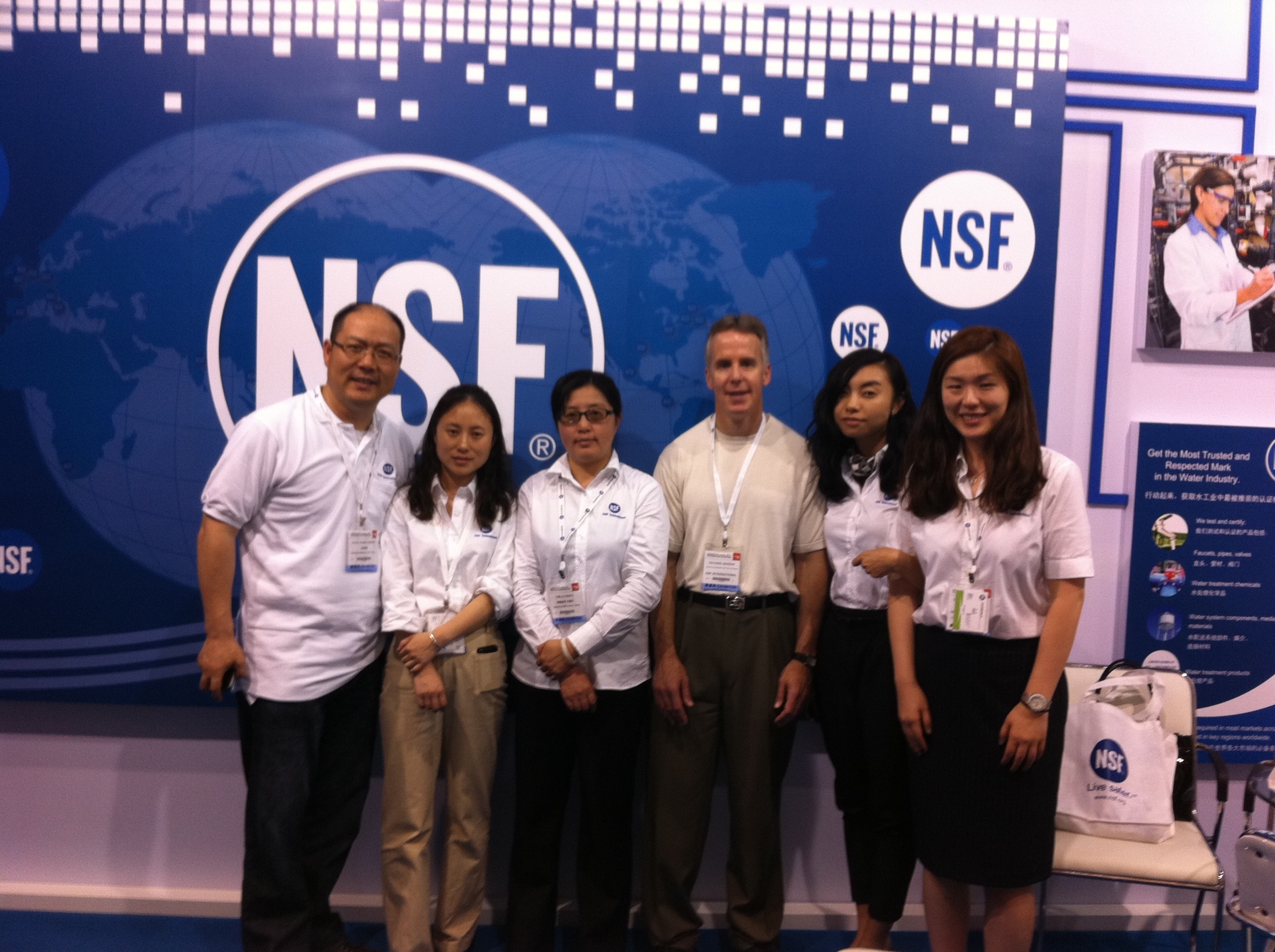