Although household rainwater catchment systems—generally home made, utilizing gutters, downspouts and rain barrels (remember the song?)—were commonly employed to collect water for gardens, those largely faded from the US scene several decades ago. Still rather common in Europe for non-potable applications and widely used in the developing world for all applications, rainwater harvesting is the primary water source available for reclamation and reuse.

Our air has become increasingly polluted with years of irresponsible behavior by all segments of society and is much dirtier now than when rainwater was collected and consumed thousands of years ago. As rainwater falls to earth, it picks up particle and gaseous contaminants.

Our drinking water quality standards are constantly becoming more stringent. In spite of this, treating rainwater—and stormwater for that matter—requires generally less technology than any other source of wastewater. The reason for this is because rainwater is the purest of virtually all sources of water, is naturally soft and is free of disinfection byproducts.

Rainwater collection is applicable not only for houses, but for all other buildings and structures—virtually anything with a roof. One inch of rainfall provides 620 gallons (2,346.9 L) of water per 1,000 ft2 (92.9 m2) of roof area. 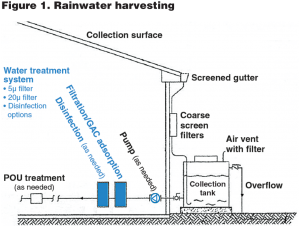 If a rainwater collection system will be used to produce potable quality water, posttreatment is needed (see Figure 1). A note of caution here: depending on the location, legal restrictions may apply regarding the use of such reclaimed water for potable purposes.

Filtration
This technology is primarily used to remove suspended solids from water supplies. These solids can be dirt, silt or other particulate material. Filtration technologies include:

Media filters. Tanks containing granular media such as sand, anthracite, garnet, etc., which capture suspended solids and retain them inside the bed until taken offline and backwashed. Bed filters are typically capable of removing suspended solids down to 10 to 20 microns in size (see Figure 2). 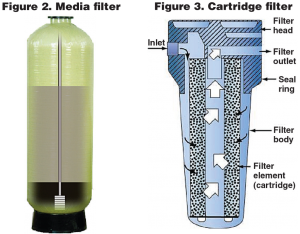 Cartridge filters. Operating in the same way as bed filters, cartridge filters are replaceable ‘inserts’ (usually cylindrical in configuration) that are inserted into housings and are typically replaced when they have captured so much suspended solids that the pressure drop across the housing becomes unacceptable (usually above 10 psig). Offered in many different designs and micron removal ratings (down into the submicron range), cartridge filters provide an excellent array of choices to the knowledgeable design engineer (see Figure 3).

Bag filters. These are similar to cartridge filters except that the medium is fabricated into a bag through which the water flows. Although not available with a micron rating as small as cartridge filters, bag filters are generally ‘tighter’ than media filters (see Figure 4).

Adsorption
Adsorption is a phenomenon utilizing the surface energy of a solid adsorbent to attract molecular species from a liquid. The most common adsorbent in water treatment is activated carbon. This product, manufactured from a number of carbon-based materials (coal, coconut shells, wood, peat, etc.) is treated to produce a porous material with very high surface area.

Activated carbon in rainwater harvesting applications is used to adsorb dissolved gases and low molecular weight organic compounds (such as VOCs) picked up by rainwater falling through the atmosphere. It is also widely used to remove chlorine from water supplies, although the mechanism of removal, in this case, is actually as a catalyst in an oxidation-reduction reaction.

Disinfection
If the treated water is to be stored or used for culinary purposes, some form of disinfection will be required to inactivate pathogenic microorganisms and keep objectionable bacteria or algae at bay.

Chlorine. In the US, chlorination of municipal drinking water supplies has been the technology of choice for well over 100 years. Chlorine, with its active ingredient hypochlorous acid, is very effective in inactivating almost all waterborne pathogens. It provides an acceptable residual, but it does have limitations, particularly the formation of dangerous trihalomethane compounds (THMs) in the presence of certain organic compounds.

Chlorine is normally pumped into the system as a solution of sodium hypochlorite, fed as tablets of calcium hypochlorite or induced as a gas. It is effective at a residential concentration of one to two ppm. Dissolved chlorine is readily removed by activated carbon adsorption and can be monitored with simple test kits. It is relatively easily rinsed out of the system.

Monochloramine. This compound, resulting from the reaction of ammonia with chlorine in water, is commonly used in municipal water supply systems because of the superior stability of chloramine compounds over chlorine. A further advantage is that chloramine compounds do not form trihalomethanes; however, monochloramine is not as strong an oxidant as chlorine and thus has less ability to kill bacteria. Concentrations of these compounds in the range of five to 10 ppm are required for effective disinfection.

The industry commonly calls the purposeful formation of monochloramine, simply chloramine; however, most municipalities and homeowners strive very hard not to form dichloramine and trichloramine by ensuring the proper ratio of ammonia to chlorine. Di and trichloramine provide little disinfection capability and are largely responsible for chlorine smell and eye irritation complaints.

Non-chemical processes
Ultraviolet irradiation. Ultraviolet (UV) irradiation is a common method of treating relatively small-scale water supplies. In this process, the water is exposed to ultraviolet radiation after it has been filtered. UV is also effective in inactivating Cryptosporidium oocysts.

POU treatment
Although the TDS concentration of rainwater is very low, if it is desirable to lower the TDS even more—for potable and culinary applications—a POU reverse osmosis (RO) system can be installed at a single tap. These systems are self-contained and include activated carbon filters and an RO membrane to reduce both ionic and organic contaminants.

Conclusion
The looming shortages of usable water, combined with the simple design and low costs associated with rainwater harvesting systems, make this a no-brainer for water treatment professionals.

This article was reprinted from WC&P April 2009.

Peter S. Cartwright, P.E., CWS-VI, is President of Cartwright Consulting Company. He has been in the water treatment industry since 1974, has authored over 125 articles, presented over 125 lectures in conferences around the world and has been awarded three patents. Cartwright has chaired several WQA committees and task forces and has received the organization’s Award of Merit. A member of WC&P Technical Review Committee since 1996, his expertise includes high-technology separation processes such as RO, UF, MF, UF electrodialysis, deionization, carbon adsorption, ozonation and distillation. Cartwright is also Technical Consultant to the Canadian Water Quality Association. He can be reached by phone (952) 854-4911; fax (952) 854-6964; email pscartwright@msn.com or on his website, www.cartwright-consulting.com.