Pentair, Inc. reported first quarter 2011 sales of $790 million (USD), a 12-percent increase from the prior year quarter. Sales growth was broad-based across its Water and Technical Products segments. US sales grew five percent, while Western European sales increased double digits. Residential flow sales were up six percent versus the prior year quarter and residential filtration sales were up three percent, as growth from continued geographic expansion and new products was partially offset by softness in the US market. 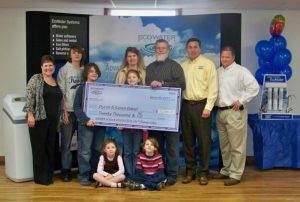 EcoWater Systems LLC awarded Byron and Karen Gabel of La Vergne, TN $20,000 (USD) in cash through its annual Soft Life™ Sweepstakes, designed to support over 250 EcoWater dealers across the nation. “The annual Soft Life™ Sweepstakes serves as a wonderful opportunity for us to support our dealers and thank our loyal customers,” said Steve Webb, Vice President of Dealer Sales and Marketing for EcoWater Systems LLC. “We’re pleased for both the Gabel’s and for our outstanding La Vergne, TN EcoWater dealer, Advanced Aqua Solutions, LLC.”

Watts Water Technologies, Inc.’s quarterly results included first quarter sales of $329.9 million, an increase of three percent versus first quarter 2010, primarily due to increased sales in both the North American and European wholesale markets. The acquisition of Danfoss Socla S.A.S. and the related water controls business of certain other entities controlled by Danfoss A/S was completed in a share and asset purchase transaction. Watts declared a quarterly dividend of eleven cents per share on the Company’s Class A Common Stock and Class B Common Stock payable on June 3 to stockholders of record at the close of business on May 23.

Zinkan Enterprises, Inc. of Twinsburg, OH has formed a strategic alliance with Hydropro, Inc. of Riviera Beach, FL and a water treatment operating division has been created within Zinkan. The company manufactures a wide variety of specialty chemicals, has terminals located throughout the US and provides chemicals and services to a worldwide clientele. It has also been operating and managing various water treatment plants for many years. 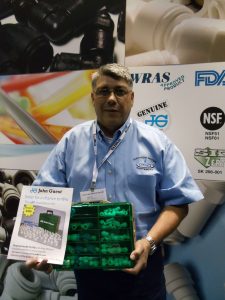 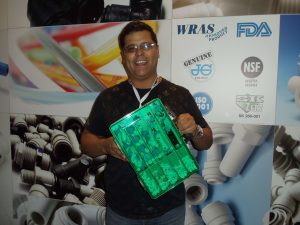 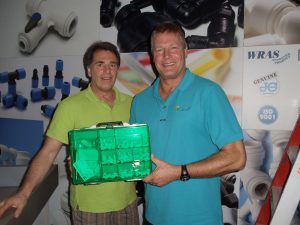 Dow Water & Process Solutions was awarded Desalination Plant of the Year by Global Water Intelligence (GWI) for its seawater reverse osmosis facility in Kurnell, Australia. The award was presented by former Secretary General of the United Nations, Kofi Anan, during the Global Water Awards ceremony in Berlin, Germany. A leading source of market information for the international water industry, GWI honors top performers in the world of water each year. The Desalination Plant of the Year award is given for the most technical achievement in the industry. Other partners in the award were Veolia Water, Sydney Water, Fichtner and the John Holland Group.

Underwriters Laboratories Inc. (UL) began offering municipalities and customers access to its globally recognized testing and certification services to detect Chromium-6 (hexavalent chromium) in drinking water supplies. The company has begun testing water samples using US EPA Method 218.6, revision 3.3, which allows for a minimum reporting limit of 0.02 ppb and offers a low-level testing option for total chromium to 0.1 ppb by US EPA Method 200.8. There is currently no federal testing mandate and limit for chromium-6 in drinking water, however, so very few labs have capability to test for the chemical at such low levels. Based on new science, and as mandated by the Safe Drinking Water Act, US EPA launched a review of the effects of chromium-6 on human health to determine if a revised standard needs to be set. It is expected that the scientific assessment will be finalized before the end of 2011.

The AZ Water Association recognized Rayne of Phoenix for outstanding work on its zero liquid discharge (ZLD) facility for centralized water softening regeneration this year. The facility was honored as the AZ Water 2011 Water Reuse Project of the Year and the award presented during the 84th AZ Water Association Annual Conference in May. Each year, the award is presented to recognize outstanding engineering excellence and achievement in the water, wastewater and water reuse categories. Projects are judged based upon several criteria, including innovative application of a new or existing technique, social and economic considerations and ability to meet owner needs.

The National Drowning Prevention Alliance Board of Directors recently agreed unanimously to accept an offer from the International Swimming Hall of Fame to occupy offices at One Hall of Fame Drive in Fort Lauderdale, FL. Since its formation in 2004, the Alliance has been based in Huntington Beach, CA. It is currently working on a federally funded national public education program that complements the US Consumer Product Safety Commission’s Pool Safely campaign. The campaign aims to reduce childhood drowning and prevent drain entrapments through public education, training programs and strategic partnerships. It fulfills requirements of the Virginia Graeme Baker Pool & Spa Safety Act.

The ASTM International D-28 Activated Carbon Committee spring meeting held in April featured Robert Potwora, Carbon Resources Technical Director, presiding as Vice-Chairman, Membership Chairman and Long Range Planning Chairman. Several attendees represented the manufacturing side and end users of activated carbon as well as new affiliates. A web-based teleconference was held for members who could not attend. During the teleconference, the draft test method to measure the adsorptive capacity of activated carbon for mercury in flue gas was discussed; some refinement of the test method is needed. After this, the actual test data can be generated on activated carbons. There was a consensus to look into development of a test method for laser particle size. The laser particle size analyzer, which is replacing use of sieves like 325 mesh for particle size, provides more detailed sizing data on PAC and fine mesh activated carbons. The next regular meeting is scheduled for October 31 in Tampa, FL, during which the committee may have a joint meeting with the Coal and Coke committee to see what synergies exist.

Pool/spa code to be created by CDC

The Board of Directors for the non-profit National Swimming Pool Foundation® voted in late April to endorse Operator Training, the first module of the Model Aquatic Health Code (MAHC). The Code is being created by the Centers for Disease Control and Prevention (CDC) and dozens of volunteers. This standard is the first public domain, scientifically based standard that is free for all jurisdictions. The first of 12 modules was issued on April 8.

Severn Trent Services has donated several portable electrolytic water disinfection systems to humanitarian agencies working in Haiti. The combined units, which convert saltwater and energy into liquid sodium hypochlorite are capable of disinfecting up to 13 million gallons (49.2 million liters) of drinking water per day. The donation is part of a grassroots campaign to enable ordinary citizens to treat their drinking water at the point of consumption. Ten portable Sanilec®systems and one ClorTec®unit were donated to Operation Blessing International, Deep Springs International and St. Damien Hospital.

LANXESS has successfully completed acquisition of DSM Elastomers and will pay €310 million ($460.9 million USD) for Dutch company Royal DSM N.V.’s elastomer business. Sittard-Geleen, the Netherlands-based DSM has roughly 420 employees worldwide and produces synthetic rubber ethylene-propylene-diene monomer (EPDM) under the Keltan brand name The company operates an EPDM facility with an annual capacity of 160,000 metric tons in Sittard-Geleen and one in Triunfo, Brazil, with a capacity of around 40,000 metric tons per year. LANXESS plans to transfer headquarters for the combined EPDM business from Marl, Germany to Sittard-Geleen and the Technical Rubber Products (TRP) business will sell its EPDM products under the Buna EP and Keltan brand names. LANXESS currently produces EPDM at sites in Marl and Orange, US.  The company financed the acquisition with existing liquidity.

Grundfos was honored with AmCham Denmark’s 2011 Trans Atlantic Business Award after close competition with TERMA, Danfoss, H.Lundbeck and Santaris Pharma.  An independent jury gave the nod to Grundfos for its impressive growth in investment and employment in the US, research in energy and eco-friendly solutions and significant contributions in corporate social responsibility. Company President Dennis Wierzbicki accepted the award on behalf of the company at a ceremony in Valby, Denmark.