Activated carbon is an excellent universal adsorbent commonly used in many water filtration applications to remove chlorine or chloramines, volatile organic chemicals (VOCs), color and a myriad of other unwanted organic compounds. It can be used in powdered form (PAC) and later filtered out of solution, granular (GAC), or extruded (pellet) form in adsorber columns. The most common types of activated carbon are manufactured from wood-, coal-, or coconut shell-base materials.

Because activated carbon manufacturing depends upon other industries for the raw material, the economic ripples affecting coal, wood and coconut shell prices can have a dramatic bearing on the availability, supply and pricing of activated carbon. We live in a truly global business world and what happens in one area or country can indeed cause raw material shortages or quality changes in a short time. As with any global products, currency conversion plays a role in product cost and the recent trend of a declining dollar value means generally higher prices on imported activated carbon.

An example of global chain reaction occurred when coalmines in Australia flooded. China could not get Australian coal, had a coal shortage for many months and began to import coal for the first time from the US. Since coal fired power plants in China have top coal priority, Chinese activated carbon producers had great difficulty getting adequate supplies of metallurgical grade coal for making activated carbon. Many Chinese coal-base activated carbon plants were closed due to lack of raw material for over a year.

Activated carbon from China has been impacted by several factors: the regular tariff of 4.8 percent on activated carbon imports (China does not have a Free Trade Agreement and is not a GSP country), the anti-dumping duty on Chinese activated carbon to the US, which is currently in the range of 4-228 percent (reviewed every year retroactively), Chinese currency has gained strength, Chinese VAT rebate to exporters was ended a few years ago and coal costs in China have increased as many coal mines have closed over the years due to safety and environmental concerns. Chinese labor costs have also risen in the past few years. China’s own domestic requirements have grown rapidly with the ongoing industrialization of the country over the past couple of decades.

When the lowlands in India and Sri Lanka flooded last year, the coconut shell charcoal pits could not function, which resulted in a shortage of char. Char prices escalated rapidly and that trend continues today.

The most recent example of world events that put pressure on the activated carbon market is the earthquake and tsunami in Japan. Many Japanese municipal water plants are now installing activated carbon media as a measure of protection against radioactive fallout. Japan has been buying much more activated carbon than usual the past two months (mostly coconut shell product) and that trend will continue for many more months.

The Department of Commerce (DOC) and International Trade Commission (ITC)-mandated anti-dumping duty, initiated in 2007 on certain steam activated carbon from China, resulted in a major drop in Chinese activated carbon exports to the US. Once the new duty was in place, domestic activated carbon manufacturers began a series of price increases to help recoup losses they experienced battling the Chinese carbon products for the previous decade. Many US coal carbon users switched to coconut shell activated carbon where feasible, as coconut shell was less expensive for the first time and actually a better product in many applications due to its higher hardness, low dust and generally higher activity.

With many users changing to coconut shell activated carbon to avoid the high price of coal carbons and many new coconut shell manufacturing plants being built in several countries in the past few years, the demand for coconut shell char has grown tremendously and resulted in a major imbalance on the supply side of char and shell with resulting progressively rising prices. Coconut char prices have nearly tripled in the past three years, with most of the gain in the last eight months, and char is the main cost factor in coconut shell activated carbon pricing. Other factors that raise coconut char pricing include high oil prices (which leads to more coco char being used for fuel) and the recent popularity of coco water, which keeps shell out of the market, as only young coconuts have the water product. In the coconut shell activated carbon world, it is often lamented that at least half of the shells are never recovered, as the coconuts are consumed at home.

Besides raw material challenges, rising fuel costs for ocean freight for imported carbon (all coconut shell activated carbon is imported and some coal and wood base activated carbons are imported from China and other countries) is another factor. Trucking delivery costs in the US have fuel surcharges in this era of rising oil prices and the ocean shipping lines have announced a General Rate Increase (GRI) of an additional $640 (USD) per 40-foot container, effective May 1. If the past is repeated, another fee for peak shipping surcharge (PSS) will soon follow (Christmas items ship several months before December).

The US Senate did not do the activated carbon industry any favor when it failed to reauthorize the Generalized System of Preferences (GSP) in December 2010. GSP has routinely been renewed and it eliminated any customs duty from many countries, including most that ship coconut shell activated carbon to the US. Since it was not renewed, carbon importers are now paying the standard 4.8-percent duty on all imported activated carbon from GSP countries. This has happened in the past and eventually GSP will be reinstated and importers should get refunds but it is an administrative burden.

Domestic coal-base activated carbon producers have done de-bottlenecking to improve production capacity and have added capacity with more plans in the future as the need for activated carbon continues to grow at over 15 percent per year according to recent activated carbon market reports. The 800-pound gorilla in the activated carbon world is the increased demand for PAC for mercury reduction from coal-fired power plant flue gas. Burning coal releases mercury into the air and the best available technology to remove the mercury is to inject PAC into the flue gas. This market consumed approximately 175 million pounds of PAC in 2010 and could grow to over 800 million pounds per year or more by 2015. In addition to the flue gas market, new US EPA regulations concerning DBP reduction that go into effect in 2012 could add an estimated demand for 60-80 million pounds of GAC. Therefore, it is easily seen that the trend for activated carbon market growth will continue for the foreseeable future. 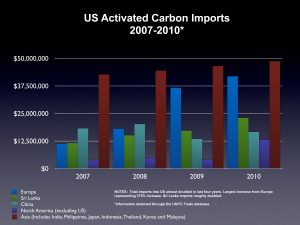 The graph shows the overall increase in US activated carbon imports over the past few years and the major supplier countries. In 2005, the total imports were $78 million with 24 percent from China; in 2010 the total was $154 million with only 11 percent from China. One should keep in mind the price of carbon has increased 20-50 percent since 2005, so it is not as large an increase in actual quantity as one would think.

Activated carbon buyers should maintain close contact with their suppliers and provide updated forecasts in order to give suppliers plenty of lead-time for production and stocking of needed carbons. Prices are headed up for most activated carbons and one should make sure that the correct type and grade of carbon is being used for each application.

Ken Schaeffer, President of Carbon Resources, LLC, has over 25 years experience in the activated carbon industry. He holds a BA in biology and an MS in environmental science from the University of Texas at Dallas; is an officer of the ASTM D28 Committee on Activated Carbon and is a member of the Pacific Water Quality Association Board of Directors. Schaeffer can be reached at ken@carbon resources.com or (760) 630-5724.