Sunny San Antonio, TX played host to WQA Aquatech 2011, providing welcome relief from freezing temperatures and snow for many attendees. The Henry B. Gonzalez Convention Center, close to the Grand Hyatt (WQA’s headquarter hotel), offered ample space for meetings, seminars and exhibitions, with the added benefit of a short stroll along San Antonio’s famous Riverwalk. At the Opening General Session, WQA President Robert Hague extolled the virtues of serving on the Board of Directors and being a part of the organization’s growth and progress. WQA Leadership Awards were presented to several members and, after his acceptance speech, William Hall flashed his 2011 Rose Bowl T-shirt to the audience, eliciting much applause and laughter.

Following that ceremony, Tim Miles (The Wizard of Ads) and business partner Paul Boomer unveiled their keynote presentation, The Civic Lessons. They detailed how social media has become one of the most powerful tools available and why companies should embrace this new marketing opportunity. Social media, said Miles and Boomer, will allow dealers to immediately respond to a variety of issues in a way that can quickly build trust with customers, becoming yet another medium that can promote successful interaction and increase sales when used properly and effectively. The pair have also been working in conjunction with WQA to revamp the organization’s website, making it more user friendly.

In their keynote presentation, How to Use the NEW Detergent Savings Study in Your Marketing, Eric Rosenthal (Culligan) and WQA’s Pauli Undesser reviewed study parameters and results, explaining how they can best be used as marketing tools. These studies will serve to quantify the benefits of water softeners in a way that has not been previously available. WQA has created several marketing programs, including a customized ad builder, to help dealers make customers aware of savings achievable with water softener systems. In addition, the 2011 Consumer Opinion Study should be available soon. Bret Tangley of Sterling Culligan moderated the discussion, explaining how this suite of new tools will greatly benefit the industry and be available to members at the website. According to panel members, consumers want to be educated, not overloaded; they don’t want hype, they want facts.

Meeting results
Dealer Section. Steve Fox’s presentation on  salt-free systems was exceptional. He explained that there are salt-less softener technologies, so questions about these systems must be dealt with professionally. Physical water treatment systems, or non-chemical scale removal systems, function for what they are intended, but customer expectations must be managed appropriately. Fox highlighted the industry’s lack of marketing for RO, distillation and DI as salt-less systems. Don Akers of

WaterPro Development followed up with how to present the shortcomings of saltless systems to customers, reviewing several websites that do tell visitors that PWTs are not softeners, and advised dealers to take the time to review these websites. Arming sales staff with tools to combat erroneous information without making prospective clients feel alienated will help set expectations properly without denigrating other products. “Water treatment dealers are the experts and that’s why you’re being contacted,” he said. People are realizing they need some kind of water treatment and dealers are in a good position to allay fears and build trust. 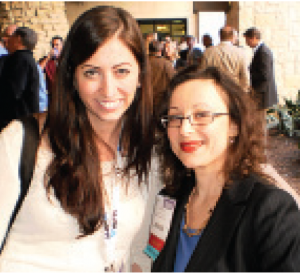 Government Relations Committee. Several high-profile issues were discussed, most notably the California regulatory situation. PWQA again engaged lawmakers in February to stave off more onerous legislation. Loretta Trapp of Clack cautioned the committee to recognize that the actual Administrative Code, which has been shaped by legislation, should be reviewed and changed, rather than the laws.

International Standards & Regulation Committee. India Task Force is progressing well and growing. The Certification Subcommittee announced that 30 people took CWS-I certification tests. They are working on an awareness campaign to increase interest and participation. The Southeast Asia Task Force’s first meeting was well attended, and the next tentative meeting is at IndoWater. Some areas are not ready for Task Force activities, noted Tom Palkon, but are ready to hold events; Gold Seal members are already in place. There is a different mindset involved in this region that may make a task force unworkable at this time. The Softened Water Eczema Trial (SWET) was a great disappointment, according to Tony Frost (see Global Spotlight). In another challenge to the industry, he said there is a movement afoot in Europe, especially in the UK, that views softened water as corrosive and to be avoided; an issue that needs to be addressed immediately to avoid damage to the industry. 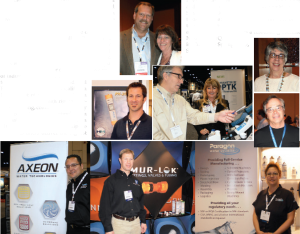 Board of Directors. Denise Urbans took the helm as Board President during the WQA Board of Directors meeting on the final day of the event, saluting Robert Hague’s efforts and leadership during the previous year, as well as those of retiring directors. Reports during the meeting indicated that WQA’s Gold Seal program had revenues of $187,000 during the year, and membership retention was at 87 percent—the highest since 2000. The goal of recruiting 400 new members was almost met, with 385 new memberships during 2010. The Convention  Committee noted a small decrease in booth sales but an increase of 28 new companies, of which 14 were international. Product showcase sales increased from 12 to 21. The industrial venue, set up outside the main show area, was a huge success.  Roundtable discussions (figure eights, as noted by Urbans) were well received and harkened back to earlier days when they were a common presentation style. Additionally, several presentations given in Spanish were well attended and very successful. Tangley noted that San Antonio was a spectacular venue and should be considered in the rotation of events. However, Executive Director Peter Censky noted that WQA is in partnership with Amsterdam RAI and cannot make such a decision unilaterally. Venue consideration, based on several factors, must have adequate ‘lift’ (transportation) capability. San Antonio doesn’t appear to be able to provide enough flights to make it a possible contender. Nearly 300 people were unable to attend due to travel issues. 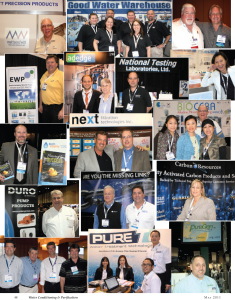 An industry first for Omnipure product
Several companies launched new services and products, in particular Omnipure’s newest cartridge filter. Sciessent LLC, creator of ionic silver-based antimicrobial brands Agion® and Agion Active™, announced that Omnipure’s inline filters treated with agion have received California Department of Pesticide Regulation registration, as well as NSF certification for bacteriostatic claims. These carbon block filters are the first and only inline filters currently active to have received both listings, contain agion technology and can claim the ability to reduce the growth of bacteria. “The receipt of these certifications is terrific news for Sciessent, for Omnipure and most importantly, for customers across a range of industries who want cleaner, better tasting drinking water,” said Paul Ford, CEO of Sciessent. “The California Department of Pesticide Regulation and NSF have, through rigorous review or testing, confirmed the efficacy of agion antimicrobial technology in combating heterotrophic bacteria in filtration beds, helping Omnipure ensure its filters deliver the highest aesthetic quality water for its public and private drinking water customers.”

I heard it on the tradeshow floor
Even though attendance appeared to be lower than last year, the quality of contacts was very good, according to many exhibitors. Rather than just wandering through the show space, visitors were asking ‘quality questions.’ In some aisles, traffic appeared slight at times, probably due to scheduling and the beautiful weather outside. Biocera representatives said they had lot of good leads and possible partnership opportunities as well, while PureTeck and Cargill mentioned increased quality leads as the biggest benefit of attending the event. PureGen’s Allan Horner noted particularly heavy traffic to his booth, as did Waterlogic. Morton Salt reps said it was a very good show all around. 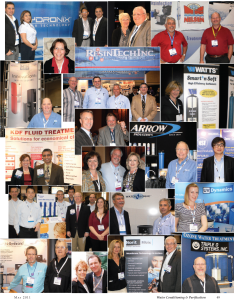 The show offered attendees many opportunities to network, find new products, meet face-to-face with pivotal industry members and rejoice in the sunshine. Several well-attended receptions offered informal opportunities to chat about business. For many, the San Antonio Riverwalk, with its numerous shops and restaurants, was a welcome respite from the frenetic pace of the tradeshow and, a few blocks away, history competed with shopping and dining. The Alamo, the Texas Ranger Museum, San Antonio Botanical Gardens and other attractions made the San Antonio experience very positive, and attendees viewed the overall experience at WQA Aquatech 2011 as a resounding success. Next stop, WQA Mid-Year in Colorado Springs, CO, September 7-9.