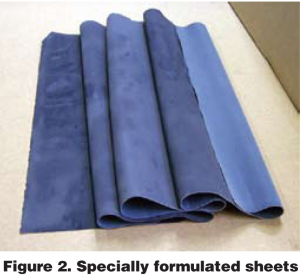 At the heart of the system are specialty TDS reduction cartridges. Specially formulated cation and anion resin is processed into a thin sheet (Figure 2) with the anion on one side and the cation on the other. This material is then rolled into logs, cut to length and capped (Figure 3). The resulting cartridges are inserted into cell housings that include a cathode and anode. When consumers draw water, the electrical current is activated, extracting dissolved solids from the feed water (Figure 4). After producing a pre-set volume of water, the system automatically reverses electrode polarity to release dissolved solids from the cation and anion media, thus regenerating itself (Figure 5). The regeneration process takes approximately 32 minutes for both cartridges (16 minutes each). Because this system operates in a batch process, all water going to the system during service mode goes to the storage tank or faucet. Water goes to the drain only in regeneration mode. The overall result is faster water production with less water waste. A pre-filter removes suspended solids and a granular activated carbon post-filter polishes the water just before it is delivered to the faucet. The system is capable of producing 0.5 gpm (1.89 L/m), thus filling a storage tank in minutes.

Programmable to match feed water quality, the system is set in two steps, similar to a 10-speed bike. Analogous to the front sprocket, the first setting has two speeds – high or low. If TDS is 400 or less, the installer sets the system for low TDS; if TDS is above 400 ppm, the system is set for high TDS. Setup is accomplished by removing the front panel from the enclosure and pushing a button on the control panel. Once the system is installed and set, consumers have five settings to choose from. This control is similar to the five speeds on the back sprocket of the bike. If consumers want to leave more

minerals in their water, they dial down the power, thus using less electricity, which causes the unit to extract fewer minerals. If TDS is above 600 ppm, a flow restrictor is used to increase contact time in the cell tower, resulting in better TDS reduction. Although TDS reduction varies based on feed water quality, even with taste control settings, typical TDS reduction for this system is 70 percent on the minimum setting and 95 percent on maximum. Drinking water quality is a function of residual chlorine and other contaminants that affect taste and odor as well as TDS levels. Some argue that too low a TDS level makes water taste ‘flat’ whereas too high a level is 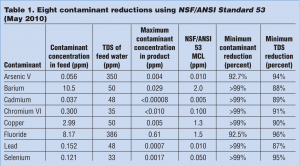 also objectionable –in the end, it’s a matter of personal taste. The technology allows the consumer to adjust product water TDS by increasing or decreasing the electrical power applied during the deionization stage. The higher the electrical power the lower the TDS level in the product level. An activated carbon filter reduces residual chlorine and other non-ionic contaminants.

In the water treatment industry, rated RO recovery is determined under lab conditions that never exist in the home. While the lab recovery rating may be 33 percent, actual recovery is more likely less than 10 percent. Further, if feed water temperature drops, recovery will drop even further. Up to 96.5 percent feed water is wasted with traditional POU ROs*.

Recovery with this system is not affected by water temperature, feed water pressure or back pressure from the tank. Under the conditions cited above, it uses 1.2 gallons (4.54 liters) of water in the regeneration process. At the low TDS setting, regeneration occurs after the system treats 3 gallons (11.35 liters) of drinking water – a 70-percent recovery. At the high setting, regeneration occurs after 1.5 gallons (5.67 liters) of drinking water are produced for a 55-percent recovery. Feed water pressure can be from 20-100 psi and temperature can be from 33-100°F (0.55-37.7°C).

The system’s sediment and carbon filters should be replaced after producing 650 gallons (2,460.51 liters) of drinking water. The cartridges will produce 1,300 gallons (4,921.03 liters) if the feed water hardness is 20 grains per gallon or less. Excessive hardness, which causes scale accumulation in the cartridges, is the most significant limiting factor in system performance. With soft feed water, cartridges will last much longer. Typical life performance in hard (18 grain) and soft water are shown in Figures 6 and 7.

As measured by independent laboratories, the ion exchange drinking water system effectively removes a wide range of contaminants. Table 1, which summarizes an independent laboratory’s recent tests, shows all (except arsenic V and selenium) contaminants were removed to non-detect levels by the water treatment method. Further, it shows all results easily meet NSF/ANSI 53 requirements. To obtain a measure of the selectivity of the electric ion exchange water treatment cartridge for each contaminant, compare the contaminant reduction to the TDS reduction result in Table 1.

When tested according to NSF/ANSI Standard 53 at another independent laboratory, an earlier model of this system reduced perchlorate by 96 percent, nitrate and nitrite by 93 percent, monochloroacetic acid by 80 percent and chloramine by 40 percent. Results obtained using a later model of the ion exchange water treatment system for customer contaminant reduction for a variety of cations and anions, including arsenic III and arsenic V, are presented in Table 2. 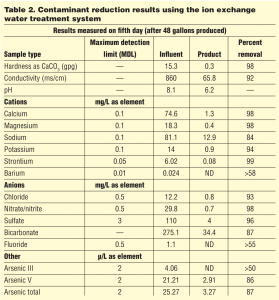 While arsenic III concentration in the feed water is very low and the detection limit of 2 ppb only allows one to conclude this ion was removed >55 percent, combined arsenic results suggest a substantially greater reduction. The cartridges are effective for removing weak acids because the anion exchange resin is in the strong base (hydroxide) form after regeneration. It is also effective for weak bases such as ammonia and to a lesser extent chloramine, because the cation resin layer is in the acid form after regeneration. Alkalinity and several other contaminants were also effectively reduced with an earlier model of the system, as shown in Table 3. 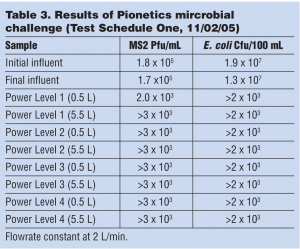 Electricity is used to deionize the water as it flows through the TDS reduction cartridge – no chemicals are used at any time. When the system calls for water, the power supply / computer delivers the programmed wattage to the cartridge(s), the greater the power setting, the higher the TDS reduction. A key characteristic of the system is current density. The technology operates at ~1 mA/cm2 of membrane cross-section area. Maximum current in a cell is ~1.65 A. The system calls for power during the three stages of operation:

Total power used results in a cost of 1-2 cents per gallon of water produced depending on the dial setting, power costs and actual water usage. At 3.5 gallons (13.24 liters) produced per day, the cost is slightly less than one cent per gallon. 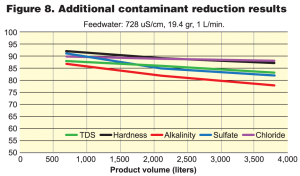 Independent laboratories measured at least two-log (100-fold) reduction of bacteria and MS-2 virus with this system. In the presence of sufficient chloride ions, bacteria reduction was six log and virus reduction was four log – the threshold limits to meet US EPA Purifier Guide Standard requirements.

Here are five characteristics of the system’s ability to deactivate microorganisms:

A report by V. Evtodienko of a study conducted by Diagnostic Technologies at the University of Carleton, Ottawa, Canada during April – July 2006 itemized the following results:

“The chlorine created in the system is thought to be one of the principal microbe deactivation mechanisms. Increasing the influent chloride concentration did not necessarily increase the amount of chlorine in the product water (Table 6), but did tend to increase the level of bacteria and virus deactivation (Table 7). Lower flow rates also increased deactivation. A summary of chloride concentration and flow rate, versus log bacteria and virus reduction is given in the last section of this report.” 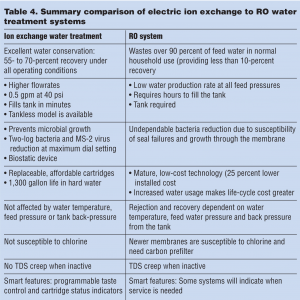 When comparing the ion exchange water treatment system to an RO system, several key characteristics stand out as significant. Most notably, the ion exchange treatment system reduces the amount of water waste, produces superior flowrates, prevents microbial growth in the membranes and is unaffected by water temperature, feed pressure or back pressure from a tank. A comprehensive list of comparisons is presented in Table 5.

A new technology employing electricity to perform ion exchange, effectively reduces a wide range of dissolved solids to produce high quality drinking water provides high flowrates directly to a faucet or to refill a tank, is relatively unaffected by water temperature and water pressure and provides feedback to the consumer indicating system status. Most importantly, compared to conventional RO systems and bottled water, this new drinking water system wastes much less water and provides consumers the ability to adjust the taste of their water with the turn of a dial.

H. Martin Jessen, Vice President of Pionetics Corporation, has over 35 years experience in for profit, non-profit and governmental agency management. He has managed operating divisions and directed the marketing efforts for major water industry corporations. Jessen also serves as Vice President of Rayne Water Corporation and previously held senior management positions with US Filter Corporation. Active in public affairs, Jensen currently serves on the WQA Board of Directors, and is Chairman of the WQA Government Relations Committee and Vice President of PWQA. He is also a Board Member of the Arizona Water Quality Association (AWQA), Phoenix Parks & Conservation Foundation, a founding member and officer of Great Lakes Protection Fund and past Member of USGS Committee on Water Data. Jessen can be reached at mjessen@pionetics.com.