Seeing the Future in Water 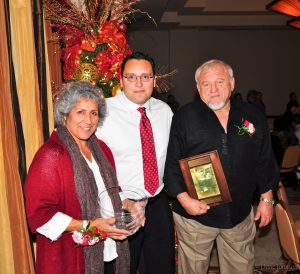 Augustin Pavel, founder of AXEON Water Technologies, formerly R.O. UltraTec, was destined to be a visionary in the water treatment industry. Born in Czechoslovakia, now the Czech Republic, Pavel was a young mechanical and chemical engineer with more creative ambition than post-World War communism could accommodate. He escaped through Holland and Germany and eventually made his way to the United States, arriving in California in 1967. His first job in water treatment was at the Caneel Bay Resort, created by philanthropist and early eco-tourism advocate Laurance S. Rockefeller. Pavel was hired to manage the resort’s desalination plant. At first glance of the facility, Pavel told himself, “This has got to be the future. The whole world will one day be using sea-water for drinking purposes.”

We are not there yet, but that vision drew Pavel into a lifelong quest for advancing water treatment. He next worked for Los Angeles-based Envirogenics, where Pavel designed and built one of the first casting machines for reverse osmosis (RO) thin-film-composite membranes, producing what has become the most popular spiral wound membrane today. He was also sent to Oman, Jordan to develop a large desalination plant.

As the water treatment industry evolved, occasionally stagnated, and progressed again, Pavel continued to develop his concepts at such companies as Hydranautics, Brunswick and Eastman Kodak. One of his biggest projects, building a membrane manufacturing plant for Iraq, came to a screeching halt in 1990 when the United Nations Security Council imposed financial and trade embargos in response to Iraq’s invasion of Kuwait. It was this disappointment that motivated Pavel to finally launch his own company.

“We started the company in our garage; our testing department was on the patio,” Pavel said one recent morning at the company’s headquarters in Fallbrook, CA. “Our goal was to product the highest quality membranes, while minimizing expenses and offering competitive pricing. And we did.”

Within two years, the company won its first large contract through a major OEM that sold through Price Club, CostCo’s predecessor. The company then moved to a commercial manufacturing location, and the company has since thrived, selling commercial and residential reverse osmosis membranes, pressure vessels and systems. Then, in November 2010, Pavel formally transitioned ownership to his son, Augustin R. Pavel, thus promoting him from Vice President to CEO and President.

“My son compliments me,” Pavel said. “I like to design, engineer and create and he likes the business aspect of things — and he does it well! He has successfully quadrupled the business while in charge, since I retired in 2003. He has made great relationships and great decisions for the company and our partners. Talk about pride!”

As for the future of the industry, Pavel persisted, “There is no question that we will be using seawater for drinking purposes in a larger scale in the future.” But in the meantime? “AXEON is competing to provide the best customer support and best systems, large and small, while offering the most competitive pricing. It’s what we do.”