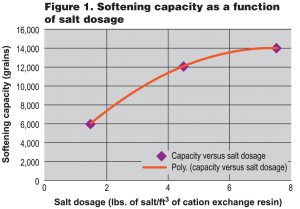 Recent developments have reopened the topic of water softener efficiency and how it is addressed by the standard. In October 2009, the NSF Joint Committee on Drinking Water Treatment Units voted to reactivate the NSF/ANSI Standard 44 Task Group to address issues that are not being addressed in the current standard, including:

This group has met several times (as recently as February 2) to move forward on these issues and will continue their work into 2011, with changes to the standard likely as an end product to their efforts.

On November 10, 2010, at a meeting of the NSF Joint Committee on Drinking Water Treatment Units, the US EPA WaterSense program announced its intent to develop a specification for cation exchange water softeners. US EPA followed this up with a formal Notification of Intent to Develop Draft Efficiency and Performance Specifications for Cation Exchange Water Softeners (http://www.epa.gov/watersense/docs/watersoftener_noi508.pdf). This notification recognized NSF/ANSI 44 as being the governing standard regarding efficiency of cation exchange water softeners. 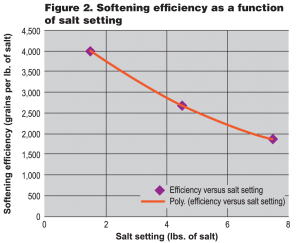 Further, the notification indicated that WaterSense will be considering water, salt and regeneration efficiencies, multiple salt dosages, possible inclusion of commercial softeners and other issues. WaterSense next held a webinar on January 19 to share background information with and seek input from stakeholders. Data is being sought from manufacturers and certifiers to help establish baselines, and potentially help establish areas in which WaterSense aims to set the bar higher. WaterSense shared their plans to meet with utility groups during January and February.

Although it is difficult to predict the ultimate direction of either NSF/ANSI 44 or US EPA WaterSense, 2011 will prove to be an interesting year for water softener manufacturers and dealers regarding the topic of softener efficiency. Just to make sure everyone is ready for the discussion, let’s take the opportunity to baseline by reviewing concepts of softener efficiency and the current requirements of the standard.

Salt dosages drive efficiency
Water softener efficiency is a function of the system design and operation, as well as the amount of salt used for regeneration. Salt dosage, expressed as the amount of salt per amount of cation exchange resin in the system, is usually expressed in units of pounds of salt per cubic feet (ft.3) of cation exchange resin. Salt efficiency decreases with increasing salt dosages. In fact, there is a point after which additional salt used in regeneration will not achieve any more softening capacity and will simply be rinsed out of the system. The theoretical maximum possible salt efficiency for standard styrene divinylbenzene cation exchange resin is 6,000 grains/lb., based on the chemistry involved in the ion exchange process. It will be interesting to see how WaterSense and the Task Group address salt efficiency, considering they are up against this technological limitation.

Efficiency determination
Current specific requirements for efficiency can be found in Figure 3. Note that only demand initiated regeneration (DIR) softeners may claim efficiency. A softener must achieve both salt and water efficiency in order to be efficiency-rated. The ratings are optional—the standard does not require softeners to be efficiencyrated. Inefficient softeners, or softeners that are not DIR, may also be certified to the standard, but the manufacturer may not claim that they are efficiency-rated. Determination of efficiency is via calculations from data measured during softening capacity testing. The amount of salt used to regenerate the softener, the resulting softening capacity and the amount of regenerant water used are recorded during capacity testing. This data allows calculations of efficiency to be conducted.

Efficiency claims requirements
NSF/ANSI 44 requires that when efficiency claims are made, the associated salt setting must be stated. This requirement is due to the variation in efficiency with salt dosage, as illustrated in Figure 2. By stating the salt setting, the operating conditions required to achieve that efficiency are as clear as possible for the consumer. It is also allowed that efficiency-rated softeners may operate at non-efficient salt settings. This option affords the consumer the flexibility to operate the softener under its most efficient setting, or to make the choice to sacrifice efficiency in order to have less frequent regenerations or address difficult water conditions such as high hardness, high iron content, etc. The state of California has a more stringent requirement for efficiency ratings, requiring at least 4,000 grains of capacity per pound of regenerant salt since January 1, 2003. Softeners with lower efficiency ratings, or no efficiency rating, may not be sold in the state. This requirement has already been noted by WaterSense as they consider background information on which to build the upcoming US EPA specification.

An interesting year ahead
While the future of NSF/ANSI 44 and an upcoming specification create a time of speculation, debate, information gathering and planning for change, one thing is certain: the manufacturers of cation exchange water softeners will do their best to predict the trends and manufacture the best, most efficient and most effective products they can. This strategy has worked for them for over half a century and should continue to serve them well during 2011 and beyond.

About the author
Rick Andrew is the Operations Manager of the NSF Drinking Water Treatment Units Program. Prior to joining NSF, his previous experience was in the area of analytical and environmental chemistry consulting. Andrew has a Bachelor’s Degree in chemistry and an MBA from the University of Michigan. He can be reached at (800) NSF-MARK or email: Andrew@nsf.org.