Erin Brockovich is not only an entertaining book and movie, it is also a vehicle for creating awareness of potential issues with drinking water contamination. The true story centers around the small town of Hinckley, California. Located in the Mojave Desert, the town’s main feature is a compressor station owned by Pacific Gas and Electric (PG&E). This station is used to help bring natural gas from Southern California to central and northern California. The station, built in 1952, previously used hexavalent chromium (Cr +6) as a corrosion inhibitor in cooling towers necessary to keep the compressors from overheating. Part of the operation of these cooling towers involved discharge of the water into unlined ponds. This practice led to contamination of the soil and groundwater with Cr +6. Groundwater concentrations have been measured in excess of 2,000 ug/L in some areas near the station. Today, a plume of groundwater contaminated with Cr +6 extends about two miles north of the station, moving in the direction of groundwater flow (http://www.swrcb.ca.gov/rwqcb6/water_issues/projects/pge/docs/plume%20mapaug2010.pdf ). Erin Brockovich helped bring suit against PG&E on behalf of Hinckley residents, who had allegedly been harmed by drinking well water contaminated with Cr +6 originating from PG&E. This suit led to a settlement of $333 million (USD) paid out by PG&E.

Chromium occurs in two different oxidation states – Cr +6, and also Cr +3 (trivalent chromium). Cr +6 is generally regarded as much more a concern in drinking water than Cr +3. At this time, however, US EPA regulates only total chromium, which is the combination of both Cr +6 and Cr +3, in drinking water. The agency has set a maximum contaminant level (MCL) for total chromium at 100 ug/L. California currently regulates total chromium more strictly at 50 ug/L, but like US EPA, California does not specifically regulate Cr +6. The state has recognized that Cr +6 is a chemical with health concerns. In August, 2009, the California Office of Environmental Health Hazard Assessment (OEHHA) announced a draft public health goal for Cr +6 in drinking water of 0.06 ug/L. This draft public health goal does not represent an enforceable standard, rather, the intent is to facilitate development of a drinking water standard for Cr +6. On December 31, 2010, OEHHA issued a revised draft public health goal for Cr +6 in drinking water of 0.02 ug/L (http://oehha.ca.gov/water/phg/pdf/Chrom6press123110.pdf ).

Claims of chromium reduction
The requirements for claims of reduction of chromium, Cr +3, and Cr +6 are similar across the NSF/ANSI DWTU Standards, although the actual test methods vary because they are tailored to the technology being evaluated. An overview of the technologies and their applicable standards can be seen in Figure 1. Note that adsorptive technologies and RO systems can be evaluated for reduction of Cr +3 and Cr +6 either during the same test, involving both contaminants, or they can be evaluated in two separate tests for each of the two contaminants. This option does not exist for distillation systems – they must be evaluated for Cr +3 and Cr +6 separately. 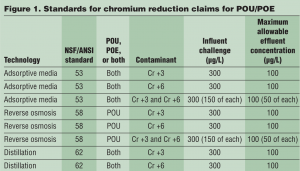 Some of the details of the test water for these tests can be seen in Figure 2. Note that adsorptive technologies must be evaluated at both low and high pH. Metals such as chromium can form different compounds in water at low vs. high pH. This and other factors can affect the performance of adsorptive media for treating these metals. Because consumer drinking water can have quite a broad range of possible pH values, it is necessary to evaluate these technologies at both pH levels to help assure their performance. The methods for evaluating these technologies are summarized in Figure 3. Adsorptive technologies are evaluated based on a multiple of the manufacturer’s recommended treatment capacity, whereas RO systems and distillers are tested over a set period according to a variety of usage conditions to ensure performance with varying end user operation. 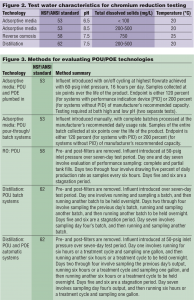 POU/POE industry well positioned to deliver solutions
Chromium, particularly Cr +6, is a potential drinking water contaminant that receives considerable consumer attention because of environmental contamination and because of work being done to evaluate its toxicity. This consumer attention works to the benefit of the POU/POE industry. POU and POE offer solutions to consumers who have these concerns and who are interested in final barrier technologies that have been proven to be effective. The NSF/ANSI Drinking Water Treatment Units standards provide the mechanism for these technologies to be evaluated for their effectiveness in treating chromium, both Cr +6 and Cr +3. These standards offer manufacturers the ability to independently certify their products and thereby provide consumers the proven effectiveness they seek.

About the author
Rick Andrew is the Operations Manager of the NSF Drinking Water Treatment Units Program for certification of POU/POE systems and components. Prior to joining NSF, his previous experience was in the area of analytical and environmental chemistry consulting. Andrew has a Bachelor’s Degree in chemistry and an MBA from the University of Michigan. He can be reached at (800) NSF-MARK or email: Andrew@nsf.org.