The Good, Bad and Ugly of Using Chlorine for Disinfecting Drinking Water

In the early 1900s, waterborne diseases such as cholera and typhoid were rampant in the United States, leading to several deaths. Cities such as Jersey City, NJ and Chicago, IL began continuous chlorination of drinking water in 1907. By 1920, over 1,000 US cities were using chlorination and by 1950, the widespread use of chlorine virtually eliminated those diseases. Today, chlorine is considered a nearly ideal disinfectant and is widely used to kill pathogens in water and protect public health. Chlorine is widely used because it is:

The filtration of drinking water plus the use of chlorine are probably the most significant public health advances of the millennium1. Although chlorine is desirable and effective in treating water to meet certain regulatory standards, it also a culprit in producing undesirable DBPs (unintended consequence). DBPs are carcinogenic (known to cause cancer) and are not desirable for public health. Details of DBP formation, regulations and minimization are further described in subsequent sections of this paper.

What are DBPs and how are they formed?

Chlorinated DBPs are a class of compounds formed when chlorine or bromine combines with the natural organic or man-made materials present in water. The most common DBPs include total trihalomethanes (TTHMs) and haloacetic acids (HAAs) although others such as haloacetonitriles, haloketones, and chlorophenols can be formed. The type and relative amounts of specific DBPs are determined by the source water quality, treatment conditions, and type of disinfectant used. In drinking water, trichloromethane is the predominant DBP, usually found at much higher levels than other DBPs.2 DBPs are volatile at room temperature and can be detected in ambient air during activities such as showering, bathing, dishwashing and swimming.3,4

General exposure to DBPs occurs through ingesting chlorinated water and/or inhaling the vapor. Skin (dermal) exposure and absorption may occur during showering and swimming in chlorinated water containing organic material. Some types of DBPs can rapidly be absorbed and distributed quickly and widely throughout the body mass. Humans exposed to elevated levels of trichloromethanes or tribromomethane may develop central nervous system depression and hepatotoxicity (chemical-driven liver damage) or bladder cancer. Other types of cancers may develop. Acute animal toxicity studies of DBPs have found central nervous system depression, liver and renal damage or necrosis, and occasionally, cardiac depression and arrhythmias.5

In January 2006, the U.S. Environmental Protection Agency (US EPA promulgated the Long-Term 2 Enhanced Surface Treatment Rule (LT2ESWTR), which focuses on reducing acute threats from microbial contamination, and the Stage 2 Disinfectant/Disinfection Byproduct Rule, which focuses on reducing the formation of DBPs in finished water distribution systems. Generally, the Stage 2 Rule was promulgated simultaneously with the Long Term 2 Enhanced Surface Water Treatment Rule (LT2ESWTR) to address concerns about risk tradeoffs between pathogen inactivation/ removal and DBP reduction. The Rule serves to limit exposure of the public to total halomethanes (TTHMs) and the sum of five haloacetic acids (HAAs), which can form during disinfection (pathogen inactivation/removal) of drinking water. The Stage 2 DBP Rule builds upon the Stage 1 DBP Rule by tightening compliance monitoring requirements for THMs and HAAs. 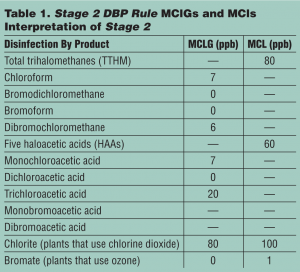 Public water systems must comply with both regulations by April 2012, and all public water systems must be in compliance by mid-2014 (systems using only groundwater are not subject to the requirements of LT2ESWTR.). The deadlines are coming soon; consequently, many utilities across North America are currently evaluating their treatment and disinfection processes.

For such systems, the main requirements are to:

At any given monitoring location, if the operational evaluation level (OEL) for TTHMs exceeds 80 µg/L or 60 µg/L for HAAs, respectively, US EPA requires that the treatment plant must conduct an operational evaluation and submit a written report of the evaluation to the respective state no later than 90 days after the system is notified of the analytical result that caused the exceedance. There are some additional steps that US EPA requires the treatment plant to take to address DBPs exceedances. Those steps are beyond the scope of this paper.

Are we creating DBPs in swimming pools at home?

As water leaves the water treatment plant and enters a swimming pool, it carries a residual concentration of chlorine and may also carry some of the organic substances, which were not removed in a water treatment plant. Many homeowners pay lots of money to maintain their swimming pools. Many times, homeowners mitigate the risk of exposure to microbial pathogens in pool water by adding more chlorine, in addition to the residual from the water treatment plant. If pool water contains sufficient amounts of organic matter and the conditions are right, DBPs are more likely to form. The potential to form DBPs in swimming pools is even greater in warm climates such as Arizona, California, Texas, etc. Forming DBPs in swimming pools may pose a health safety risk. It should be noted that in the US, the water quality of swimming pools is not regulated at the national level by US EPA. Instead, it is usually managed by state or local public health departments, sometimes by pool managers or lifeguards or homeowners themselves. Most of those professionals are not required or trained to identify or even mitigate immediate hazards that might result from exposure to DBPs in swimming pools. 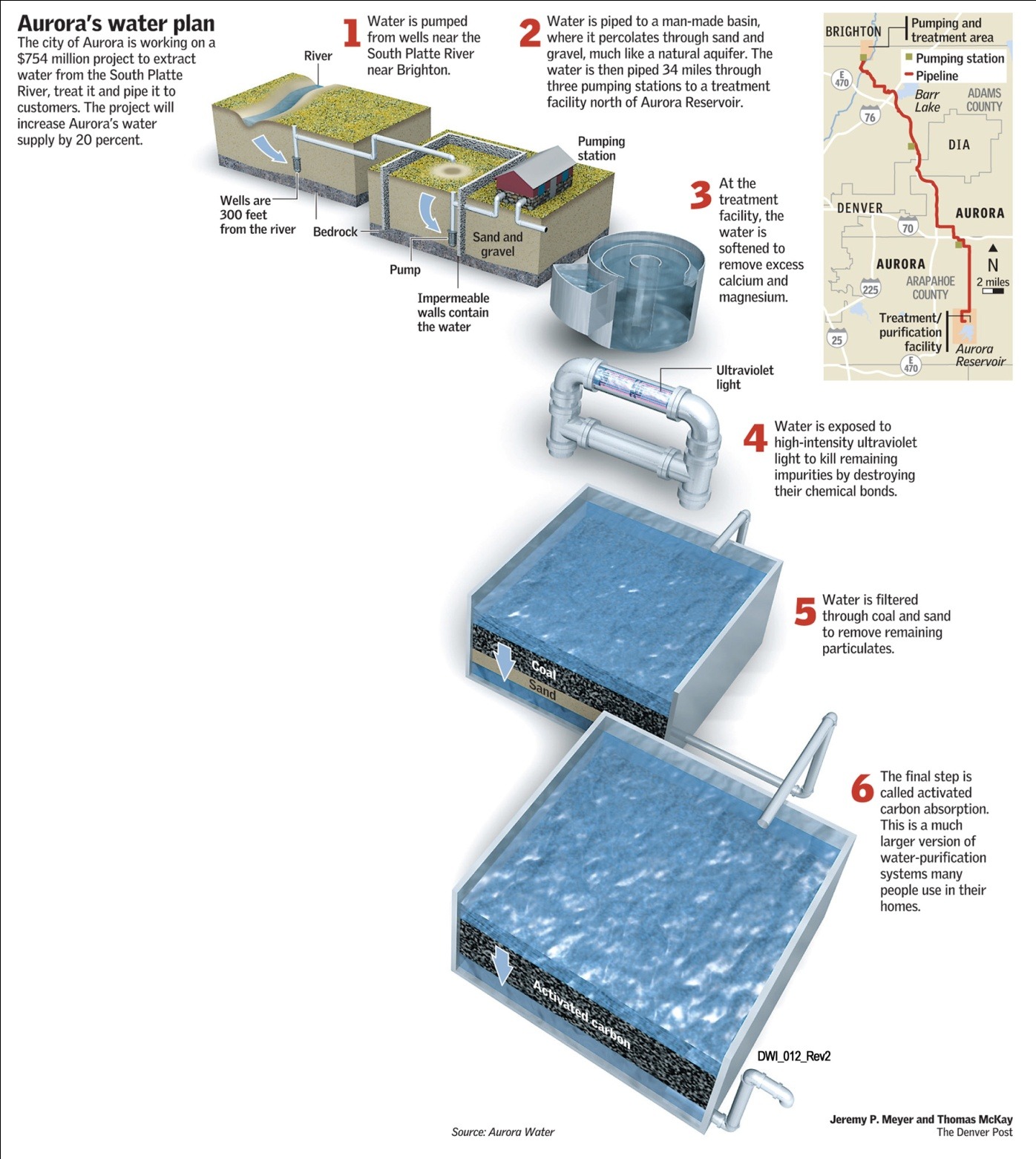 Aurora’s water treatment plant is one of many currently using (or planning to use) GAC for removing organics. The Stage 2 DBP Rule is leading many other water treatment plants to consider the use of granular activated carbon to further reduce the formation of DBPs. Currently, there are approximately 100 to 140 online drinking water GAC facilities in the US, approximating 10 MGD (37.8 million L/day) or greater capacity range. Other than reducing DBP formation by removing precursors, GAC is used to:

To fully understand why GAC is widely used for minimizing the formation potential of DBPs, the types, structural and adsorptive properties are briefly described below.

History and types of activated carbon

As far back as 2000 BC, ancient Egyptians used charcoal for water purification. In the early days, activated carbons that were used for water treatment operations were commonly produced from wood, peat, and other vegetable derivatives. In recent years, a modified form of charcoal (activated carbon) is commonly used (Figure 2). 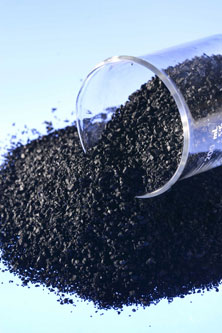 Modern day activated carbon can be produced from a number of materials containing a high carbon content such as wood, petroleum coke, bituminous coal, nut shells, lignite, peat sawdust, etc. Today, lignite, natural coal and coke are the most frequently used sources of activated carbon due to their availability and low cost. The starting material influences surface areas, adsorptive properties and effectiveness of the respective final product. GAC made from bituminous coal has both large and small pores and is a good general-purpose carbon for this reason. This type of GAC is easy to reactivate and is good for chlorine removal. Lignite is a soft wood-based carbon and very low in density. GAC made from lignite is commonly used in water treatment applications for color removal and chlorine removal. Coconut is the hardest and least dusty of all the base materials. GAC made from coconut is good for removal of small or low molecular weight organic compounds.

Generally, activated carbon has the strongest adsorptive affinity and a large internal surface area (up to 1,500 m2/g (16,145.86 foot2/g) for organics of any material known. These properties explain why GAC treatment processes have been recognized as one of the most cost effective and efficient technologies for the removal of certain organic substances from drinking water and hence its increasing use to address a growing list of water quality goals. 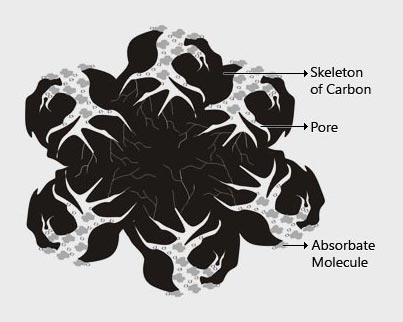 According to the US Subcommittee on Adsorption of the National Research Council’s Safe Drinking Water Committee, 1999, the specific area of the micropores usually amounts to at least 90 percent of the total surface area. Since different sizes of organic molecules will fit in different size spaces of the GAC structure, the number of pore types is a very important criterion in determining the type and removal efficiencies of the organic molecules present in water to be treated. For the municipal water treatment industry, the GAC type with a large number of micropores is most desired because the particles removed from the water typically fit in that size ranges of pores. It should also be noted that high GAC surface area is not the only property that determines the removal efficiency of organic matter from solution. The adsorption potential of a given carbon is also dependent on numerous factors, including characteristics of the adsorbate, their concentration and the conditions of treatment scenarios (temperature, pressure, pH, contact time, etc.). The reader should note that apart from adsorption, there are other removal mechanisms, such as biological activity, that occur within the GAC matrix.

How is GAC implemented for organic contaminant removal?

For both small-scale (household level) and large-scale operations, carbon adsorption technology is implemented by passing contaminated water through a vessel (or vessels) containing GAC (Figure 4). 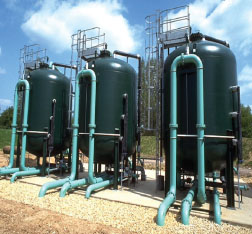 The attraction between molecules of dissolved organics (adsorbate) and the GAC (adsorbent) surface results in adsorptive forces that attract the organic molecules to the GAC surface as the water passes through the vessel. As such, organic molecules remain attached to the GAC matrix and water leaves the system with a decreased contaminant concentration. Activated carbon filtration is also very common in a number of home water treatment systems. A typical countertop or under-counter filter system has from 12 to 24 ounces (0.34 to 0.68 kgs) of activated carbon (Figure 5). In homes, activated carbon filtration can be used as a standalone filter to reduce or eliminate bad tastes and odors, chlorine and many organic contaminants in municipal (pre-treated or chlorinated) water supplies to produce a significantly improved drinking water. It is also very commonly used as a pre-treatment part of reverse osmosis system to reduce many soluble organic contaminants, chlorine and other constituents that could foul the reverse osmosis membrane. Carbon block filters with a 0.5-micron rating are commonly used to remove cysts, such as Giardia and Cryptosporidium and particles. 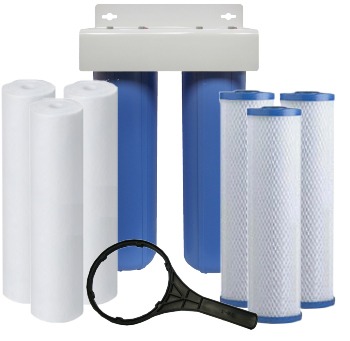 Carbon adsorption has several advantages over other water treatment methods. The benefits of GAC for DBP reduction include:

The limitations of GAC effectiveness for removal of organic precursors include:

As previously stated, chlorine is widely desirable and effective in killing pathogens commonly present in drinking water, which helps protect public health. Numerous studies have proven that chlorine is a culprit in producing undesirable DBPs that are carcinogenic. Currently, US EPA is aggressively addressing DBP problems in public water distribution systems. Another area of concern for DBPs is aquatic venues. Once public water enters swimming pools, its quality (with respect to reformation of DBPs) is not regulated at the national level by US EPA or even by state governments. Without any regulatory standard of the maximum DBP limit that is allowed in swimming pools, forming elevated levels of DBPs may pose an even greater health risk to homeowners. Service-water businesses have a profitable opportunity to provide technological solutions to protect the public from exposure to DBPs. Such a development will be good for homeowners, local communities and for business.

Dr. Mo Mukiibi is an Environmental Engineer with CH2M Hill, Inc.’s Water Business Group, based in Tempe, AZ. He is currently helping with BP oil spill cleanup efforts in the Gulf of Mexico. Dr. Mukiibi is also conducting a study on formation and occurrence of DBPs in Arizona’s swimming pools and correlations to cancers. His technical expertise ranges from water and wastewater treatment, remediation, process control and water system design. Dr. Mukiibi is a technical expert (water and sanitation) for the World Health Organization. Well published and with presentations at many conferences locally and internationally, he is a member of the WC&P Technical Review Committee, and is an active member of WEF and AWWA. Dr.Mukiibi can be reached via phone (702) -540-9183, or; email mmukiibi@ch2m.com.

Dr. Noel Sherwin, a resident of Tucson, AZ, obtained her Master’s Degree from Harvard and her doctorate in clinical psychology from Boston University. She is well published and deeply engaged in environmental issues. Dr. Noel can be reached at noelsherwin@gmail.com.