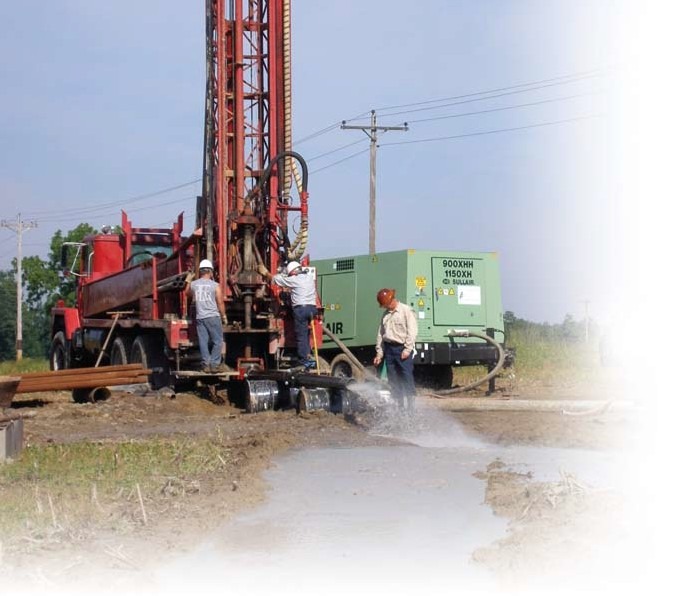 Figure 1. Deep test drilling for a new water well field—information is collected by drillers and geologists on formation materials, water yield and quality.

Challenging raw water quality frequently has a geological origin, even if the source is not groundwater. Understanding that geological origin can help those responsible for the operation of a groundwater system (or even operators of a major public water supply reservoir) to make decisions to avoid or mitigate undesirable water quality. For well water supplies, sometimes a very simple strategy of changing well depth or pumping rates can be used to avoid a problem, or to reduce or eliminate treatment requirements.The need to install and operate a water treatment system cannot always be avoided (and probably shouldn’t be); however, hydrogeologic information and well construction planning and skill can simplify water treatment installation and operation. 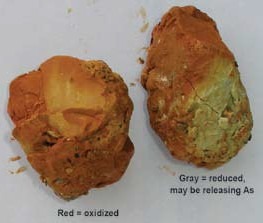 Some geochemistry
Experience in a variety of hydrogeologic settings shows that understanding lithologic (earth materials) and geochemical controls on undesirable constituents such as arsenic, uranium or sulfide can be used to design wells so that the presence of these constituents is minimized in raw well water. In our experience, we have used geologic logging to identify zones that contribute tohigh iron, sulfide and arsenic, and to narrow the search for zones containing uranium in regional carbonate rock and ammonia in shallow sands

Where arsenic (As) is a problem in groundwater, the source is usually found in specific layers or zones, not generally spread throughout the aquifer. Arsenic resembles iron (Fe) or manganese (Mn) in that the oxidized species As(V) is poorly soluble and the reduced species As(III) is highly soluble. As(V), however, is strongly attracted to Fe(III) oxides (especially those like ferrihydrite) formed by microbial action. As(III) attaches to sulfide minerals such as pyrite.

The As-Fe relationship can be used in water treatment. Where sufficient Fe is present,  arsenic is also removed utilizing conventional oxidation-bed filtration systems. The pyrite-As(III) relationship is more of a problem. Pyrite deposits (commonly found in carbonate rock and sandstone) can incorporate As; that is, the As is part of the pyrite, substituting for Fe(II). When wells are pumped, well water becomes oxidized enough to oxidize pyrite (FeS minerals), thereby releasing soluble As(III) into well water. Sulfide is likewise a soluble, chemically reduced species. It becomes intensely insoluble if mixed with iron to form those black iron sulfides. When oxidized slightly, it becomes rather insoluble (but encourages sticky sulfur oxidizing bacteria growth). Oxidized more, it becomes soluble sulfate.

Uranium also has soluble and insoluble species, but the insoluble form is the reduced species and the soluble one is the oxidized species, the opposite of Fe, Mn and As. So-called ’roll front’ uranium ore bodies form when soluble, uranium-rich water encounters groundwater that is chemically reduced (electrons gained by the uranium). When this encounter occurs, insoluble uranium may be deposited. If this occurs on a large scale, an ore body develops. These can happen on a small scale—not enough to mine and make money, but enough to exceed uranium limits in drinking water. When a well is drilled into such a zone and pumped, it’s like a little solution-mining project: when water is oxidized, the solubility of uranium increases, thereby yielding elevated uranium levels in the pumped water.

Many other water constituents have obvious geologic origins, including radon and other radionuclides. These are sufficient, however, for the current discussion, and some of these are not so easily resolved through well design. Gases such as radon or methane tend to be diffuse in aquifer rock, and drilling deeper definitely will not help, as the source is either a) all around or b) below.

Geologic solution?
During the drilling process, the driller or geologist log drilling cuttings to classify and record the formation materials (see Figure 1). If arsenic, uranium or sulfide, etc. are suspected in the area, having a geologist examine cuttings is a good investment, as the geologist (or keenly observant and trained driller) can identify minerals likely to be associated with those problematic constituents in question. These problem zones can then be cased off if other more suitable aquifer zones are available. The tendency in managing well construction is to stop at the first useful water, or when enough water is encountered. Sometimes it is more cost-effective to case off abundant but troublesome wa- ter, and go deeper if a better source can be encountered. Borehole, casing and grout can be inexpensive (especially on a lifecycle cost basis) compared to water treatment in some cases. Even when it does not replace treatment, casing off offensive constituents can lower the treatment costs. If Fe is dropped from four to one mg/L, or arsenic from 50 µg/L to three µg/L, treatment systems can be smaller, backwash water less laden with undesirable minerals, and filter maintenance potentially conducted at longer intervals without loss in filtration performance. Deeper water can have its own problems: higher total dissolved solids, hardness, salinity, etc. In the glaciated Midwest, it is common for sand-and-gravel aquifers to have sand zones separated by clay layers. The deeper zones typically have higher Fe. 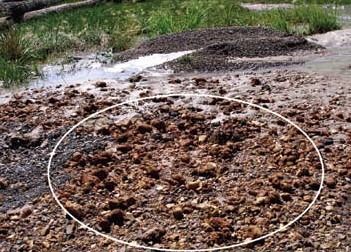 Figure 3. Hunks of terra cotta clay blown out during drilling

Two examples
The uranium blues. Exploring for a wellfield for a hard-luck public water supply client, we thought we had a real winner. Based on a tip from a 40-year-old test well log, we conducted test drilling on a property and found a highly productive carbonate aquifer zone that could supply the client—and potentially half the county. The water quality results then came back with significant uranium content. We had encountered pyrite-rich zones in certain dolomite zones, so this was not surprising. Uranium can be removed by ion exchange, but the state public water supply agency is reluctant to permit relying on that solution. Fortunately, in this case, the offending zones could potentially be cased off, relying on water from a deep, porous white dolomite. Far from its recharge areas, this zone was still not saline and not excessively hard or high in TDS. The property was not developed for economic reasons (but for mineral water bottlers out there, the property owner is interested in development).

Avoiding arsenic and iron. A school client was constructing a new well. Arsenic in the current well was above the 10-µg/L public water supply standard. An iron removal system was effectively removing the arsenic. We knew that a desirable dolomite aquifer zone occurred below the zone tapped by the old-school well. Again, far from its western-Ohio recharge areas, it could be saline or high in TDS, but typically low in Fe and As (usually undetectable). The clients gave the go-ahead for a deep-cased well. Geothermal drilling on the site showed that well drilling had to deal with abundant shallow water, so a surface casing was set and grouted and drilling commenced. Shallow water, estimated at 1,000 gal/min, filled the area and drains forcing a casing-size reduction, and making well grouting difficult. Highly skilled drillers, however, completed the task and we conducted the pumping tests. Field test data were promising: shallow water Fe was high, while the completion zone Fe level was below the 0.3 mg/L standard and hardness and TDS levels were moderate. When the lab data came back, arsenic was less than three µg/L and Fe 360 µg/L. No new water treatment would be needed, and the existing filtration system could accommodate the higher well pumping rate. (Oh yes, the well was very productive too. These are the times when you feel like a winner.) It looks like the shallow arsenic was associated with Fe-rich glacial clays in shallow gravels (see Figures 2 and 3).

Planning for prevention
These procedures may not be for every private home well, but certainly worthwhile where a) there is a highly troublesome constituent such as arsenic (we would suggest to anyone where our school well was drilled to consider a geological review), and b) the troublesome constituent can be avoided geologically. We would definitely recommend bringing in geologic expertise for the small public water systems typically served by water treatment specialists that serve both domestic and small-commercial markets.

In instances where radon or methane are present, casing off certain zones may not help, but a geologist can help at these sites as well. In those situations, casings can be sized and designed to vent the offending gas. Some gas is shallow, biogenic methane (i.e., generated in place by bacteria, and not ancient ‘natural’ gas), and some of those zones can be isolated. In methane-rich areas where gas resources are tapped by drilling, it may be useful to have professionals document the amount and features of gas, geology and well construction.

Problems that come with age
It is a fact of life that everything ages and deteriorates: teeth, knees, ball joints, fenders—and water wells too. People who trade their trucks at the first sign of rust on the tailgate will neglect a water well for decades, and be surprised that the well, drilled in 1974, is pumping black specks and experiencing poor coliform test results. The black specks are, of course, filling the softener and contributing to those whiffs of sulfide on the hot water side. The well needs to be cleaned.

The necessity of well rehabilitation (attempts to recover performance) and maintenance (actions to delay performance decline) has long been accepted in the oil patch and, over the last 20 years, in the municipal and irrigation well markets. Domestic well owners have been slower to join the call to perform routine maintenance (see Figure 4). The same conditions and mechanisms apply, however, whether the well is large or small. Many of these contribute to water quality problems:

A logical solution to such symptoms might be to install a series of water treatment equipment solutions, but a good place to start might be to check for symptoms that indicate well deterioration. This can include a suite of water quality and bacteriological tests and a video inspection (commonly applied and readily available these days), followed by a proper cleaning of the well, if symptoms indicate the necessity for doing so. Inspection may result in a conclusion that the well should be replaced by a new one.

Typically, a licensed water well contractor will conduct the well cleaning. Some specialize in this work and are more capable than other service providers. If a well is aging and cleaning is indicated and performed, we recommend installing backwashable filtration at the entry point to the user’s water system. After a well cleaning event, discolored water and turbidity can be coughed up on an irregular basis for a long time. Also, once cleaned, biofouling can be expected to return. Filtration tends to keep this out of the distribution system.

About the authors
Stuart Smith, CGWP and Allen Comeskey, CPG, have been partners and consulting hydrogeologists with Ground Water Science (www.groundwaterscience.com) since 1996. Each has more than 30 years of experience with groundwater supply development, water quality issues, and well maintenance and rehabilitation. Smith and Comeskey are also co-authors of the recently published book, “Sustainable Wells: Maintenance, Problem Prevention, and Rehabilitation” (CRC Press), focusing on preventive and maintenance choices and procedures that slow or prevent well (and well water quality) deterioration.