(Editor’s note: this article first appeared in the IDA Journal on Desalination and Water Reuse and is reprinted with their permission.)

Pretreatment has long been the chink in the armor of seawater reverse osmosis (SWRO) desalination, particularly in plants using open intakes. Fluctuating, often high turbidities— combined with frequent high levels of organic, microbial, and colloidal constituents—are the primary troublemakers. But seawater’s high ionic strength—which reduces the effectiveness of traditional coagulation, flocculation, sedimentation, and filtration—makes it more difficult to remove problematic constituents. The impact of inadequate or ineffective pretreatment on the performance of a SWRO plant can result from any of the following or a combination thereof:

Five distinct types of membrane fouling are typically identified in the literature: particulate fouling, scaling, biofouling, organic fouling and colloidal fouling. For removing particulates and colloids, traditional pretreatment systems have used a combination of coagulation, flocculation and media filtration. In-line flocculation is common, and media filtration, consisting of a combination of sand, anthracite and sometimes garnet, is either one- or two-stage.

Manufacturers have responded with improved products, in some cases customized for the seawater environment. In the last five years, a number of full-scale MF/UF systems have been installed as SWRO pretreatment. In time, these systems should confirm the value of membrane filtration as a SWRO pretreatment process.

Huehmer recently reported (2010) that about 100 MF/UF units for SWRO pretreatment had been installed or are under contract for construction. Even more remarkable, by 2013, if current trends continue, approximately nine million m3/day of MF/UF capacity will have been installed in SWRO plants, according to Huehmer.

But MF and UF have not solved one of the biggest pretreatment challenges facing desalters around the world: red tides. Red tide events are increasing, according to the Woods Hole Oceanographic Institution. In its course on Toxic Blooms: Understanding Red Tides, the institution debates the cause of the increase in harmful algal blooms (HABs) as a function of increased seawater temperatures and high localized levels of nutrients, in some cases associated with wastewater discharges. In 2008 and 2009, numerous SWRO plants around the world were temporarily turned down or shut off because of the high biomass content of HABs in the seawater. Plants in affected areas that continued operation were equipped with dissolved air flotation (DAF), an operation that was almost unheard of for seawater desalination pretreatment more than a decade ago.

New trends
When DAF was initially suggested as a way to enhance organics removal in SWRO pretreatment, many were skeptical. Early work (Rovel, 2003) demonstrated DAF’s ability to remove 25 to 30 percent of natural organic material (NOM). Algal removal has been touted as a DAF benefit in surface treatment for years, allowing downstream membrane processes to increase operating flux rates. Due to seawater’s high ionic strength and pH, the coagulation/flocculation process using metal salts is hindered relative to freshwater. One variable that enhances this process is flocculation retention time (Duan et al., 2003). Therefore, DAF’s success as a pretreatment ‘win’ for the desalination industry may, in part, be its addition of retention time in the flocculation process. Regardless, DAF use is a trend in SWRO pretreatment of challenging water because it is simple, cost-effective and has been proved. DAF is now being used regularly in new seawater RO plants in the Arabian Gulf upstream of media filtration or MF/UF.

A discussion of SWRO pretreatment trends is incomplete without mentioning biofouling prevention. The historical approach to controlling biogrowth was to scourge the intake and pretreatment systems with chlorine on a continuous basis, dechlorinating upstream of the RO system. Time has taught us that shock dosing is more effective, and our goal should be to limit growth and reproduction of microbes rather than to puncture their cellular structure, which increases biofouling. Alternative biocides, such as chlorine dioxide and DBPNA, in nonpotable applications are also minor trends in some regions of the world.

Other aspects of the pretreatment process that are undergoing transformation downstream of filtration include elimination of filtrate tanks and cartridge filters, both of which foster bio- growth. Cartridge filters are particularly susceptible to biogrowth because dechlorination often occurs upstream to allow enough retention time prior to the RO system. 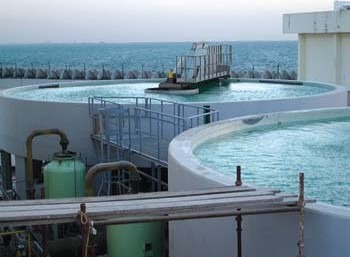 With the advent of MF/UF, some systems have eliminated filtrate tanks and cartridge filters as problem areas in the overall pretreatment processes. Removing the filtrate tank reduces hydraulic flexibility during operation, and sufficient MF/UF system redundancy must be installed to manage this reduction. Also, a source of filtrate is required for backwashing the MF/UF system. Some MF/UF systems cannot accommodate a direct backwash line. Another benefit of eliminating filtrate tanks and cartridge filters is reduced power losses in the system and elimination of high-pressure booster pumps when pressurized MF/UF systems are used.

Challenges continue
Pretreatment will likely continue to be the most challenging aspect of designing and operating a SWRO plant, mainly because seawater quality fluctuates and is alive with microbes looking for a home and nutrient source. Though the industry has not found a perfect pretreatment process, multiple options are now available for site-specific variables. Accessing historical seawater quality and conducting pilot testing are key to SWRO project success.

System design should focus on technology as well as operating parameters and strategies to prevent pretreatment upsets. We shouldn’t be afraid of trying new or unconventional approaches, such as removing problem unit operations, if we can design around them.

About the author
Lisa Henthorne is Past President of the International Desalination Association and Senior Vice President and Chief Technology Officer with Water Standard, Tampa, Florida. She can be reached at lhenthorne@waterstandard.com.