Distillation is not a new water treatment technique. In fact, distillation processes have been used for hundreds of years. Because distillation involves vaporization and

NSF/ANSI Standard 62 includes test methods designed to evaluate the effectiveness of residential distillation systems. These test methods, like all of the technology-specific test methods in the NSF/ANSI Drinking Water Treatment Unit Standards, have been developed specifically to evaluate distillation systems, taking into account potential failure modes for the technology. For this reason, the method for testing distillation systems for total dissolved solids (TDS) reduction is different from the method for testing RO systems for TDS reduction. NSF/ANSI 62 was revised in 2009, and includes new criteria for TDS reduction, as well as for testing the effectiveness of warning the user when systems with claims of microbiological purification are not performing.

TDS reduction as an indicator of distillation performance
NSF conducted a study in 1991 to assess the potential to use TDS as a surrogate for distillation performance of distillation systems reducing the concentration of a variety of inorganic ionic contaminants, as shown in Table 1. The study included evaluation of two different distillation systems. One was a 1.5-gallon (5.67-liter) batch size, capable of producing three batches per day. The second was an automatic distillation system capable of producing 12 gallons per day (45.42 L/d) in a 12-gallon reservoir. Both systems were modified for testing by removing all carbon filters, so that only distillation performance was evaluated. Deionized test water containing all of the contaminants in Table 1, along with sodium chloride, was introduced to each distillation system at pH 5. The study was then repeated with the water at pH 8. As an example of the test protocol including specific considerations to challenge the specific technology being evaluated, the deionized water was chlorinated to allow potentially volatile chlorides of any of the ions to form and possibly carry over into the product water. 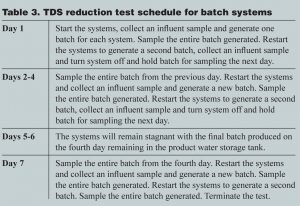 TDS reduction testing
NSF/ANSI 62 requires that the system, with all carbon filters removed, reduce a challenge of 1,000 mg/L sodium chloride in deionized water by at least 97 percent at all sample points throughout the course of the test. Ninety-seven-percent reduction is a new requirement as of 2009 because, prior to the 1999 version of the standard, this requirement was a reduction in TDS of 99 percent. For batch systems, the operational cycle of the test is per Table 3. For systems that cannot generate at least two batches per day, the test protocol is lengthened to the point where at least 10 batches can be collected from each system. Automatic systems are operated similarly to batch systems, with the two-day stagnation period on days five and six, except that one-gallon samples of distilled water are collected every six hours of operation. If the production rate is such that more than one gallon is collected every six hours, any product water over and above the first gallon is discarded. The inlet pressure for this testing is 50 psig.

Microbiological reduction claim
The organism Bacillus atrophaeus is used to establish conformance for claims of microbiological reduction of residential distillers. Chlorine free water with 200 to 500 mg/L TDS and 107 spores/mL of Bacillus atrophaeus is used as the challenge water. Two distillation systems are tested, and for batch systems, two batches are processed. Four samples of product water are collected for each batch processed. For automatic systems, two systems are tested. After the first sets of four samples of product water are collected from each system, the systems are completely drained, and the procedure is repeated. In each case, a total of four influent and sixteen effluent samples are collected for the test. A minimum of six-log reduction of the organism is required for each sample point.

Performance indication
Manufacturers who wish to make claims on distillers for the reduction of health contaminants (i.e., anything above and beyond TDS reduction) must provide a method for consumers to determine that the system is functioning properly. The standard allows the following options:

Manufacturers wishing to make claims of microbiological purification must provide for an automatic monitoring of the product-water stream and an indication to the user of system failure, or the system must be designed to do the following:

This test has been revised in the 2009 version of NSF/ANSI 62. Previously, a solution of 10 mg/L TDS of sodium chloride was used, and each type of system was tested by introducing only 500 mL of the solution. The new test is designed to be more applicable to the technology being evaluated, while still being sufficient to detect system failures or malfunctions.

Conclusion
NSF/ANSI 62 covers performance of residential distillation systems for claims of TDS reduction, reduction of dissolved inorganic ionic contaminants, and microbiological purification. The test methods are straightforward, with claims for reduction of certain dissolved inorganic ionic contaminants based on TDS reduction performance. Because it is important to warn users when systems making health claims are not working properly, the standard also provides detailed requirements and test methods to address this issue.

About the author
Rick Andrew is Operations Manager of the NSF Drinking Water Treatment Units Program for certification of POU/POE systems and components. Prior to joining NSF, his previous experience was in the area of analytical and environmental chemistry consulting. Andrew holds a Bachelor’s Degree in chemistry and an MBA from the University of Michigan. He can be reached at (800) NSF-MARK or email: Andrew@nsf.org.