On December 31, Dick Nelson will retire from T-DRILL Industries, Inc. Of his 34 years in the industry, he spent 30 at T-DRILL. Nelson, who served as Sales Manager of Commercial Products and Secretary of the Corporation, will be succeeded by his friend of more than two decades, Jarno Syrenius. Syrenius has been with T-DRILL since 2000 and has spent time in the International and North American Divisions in both engineering and sales capacities. 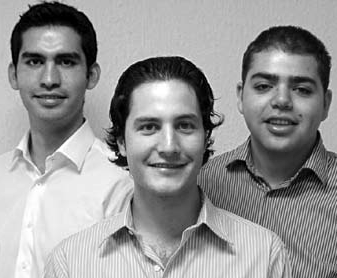 LabStrong added Tim Gerhard to its tech- nical/customer service staff, responsible for all service dealer activities, in addition to produc- tion and quality areas. He brings over 20 years of experience in the technical service, customer service and training fields for laboratory equipment.

Gerhard has worked with a variety of products such as water purification systems, mixers, shakers, hot plates, incubators and many others. Previously, he was an Equipment Service Coordina- tor at Thermo Fisher Scientific. For any LabStrong technical service questions, contact Gerhard at (563) 588-8900 or tim. gerhard@labstrong.com.

Samantha Luedke was recently named Sales Representative at Creative Water Solu- tions. In the laboratory at Embro Corporation and later at CWS, she helped perform some of the earliest tests on SpaNaturally and PoolNaturally sphag- num moss green products for the pool and spa industry. Luedke studied an array of subjects at Minnesota State University- Mankato with a focus on environmental science and geography. A National Geography Honor Society and Surfrider Foundation member, she has also earned Certified Pool Operator status.

David R. Wunsch, Ph.D. was named Director of Science and Technology for the National Ground Water Association (NGWA), leaving his position of 10 years as State Geologist of New Hampshire. He previously served as a Congressional Science Fellow, a geology instructor at Central Michigan University, has served on and presented his research to several National Academy of Science panels, and is currently an associate editor of the journal Ground Water.

Tursi named to AMTA Board

Vincent Tursi, a water systems technology specialist, has been elected to the American Membrane Technology As- sociation’s (AMTA) Board of Directors for a one-year term, and Chair of the Public Relations Committee. He is responsible for providing strategic insight to guide AMTA’s operations, and furthering the organization’s mission to promote, advo- cate and advance the understanding and application of membrane technology to create safe, affordable and reliable water supplies. Tursi has been involved with AMTA for three years and in 2009, was awarded the Presidential Award for his commitment and personal efforts in sup- port of the organization.

Wilden® promoted Rob Guertin to Market- ing Manager, reporting to Walter Bonnett, PSG’s Vice President of Global Marketing. Guertin will develop and execute global and regional marketing plans that will be designed to enhance growth and extend the company brand worldwide. He will work closely with the PSG sales and marketing teams, as well as with the company’s engineering department, to promote and educate sales-channel partners and end-users onWilden’s many lines of industrial pumping products.

UV disinfection specialist Aquionics named Oliver Lawal as its new President. Lawal was promoted from the position of Technical Director in the UV division of Aquion- ics’ parent company, Halma Plc. He joined Aquionics and Halma Plc. in 2009. Having worked for companies in the US, UK, New Zealand and Ger- many, Lawal has over 12 years of experi- ence with UV products and applications. He holds a Bachelor’s Degree in integrated engineering systems from Manchester Metropolitan University (UK).

The Water Environment Federation (WEF) named Michael K. Stenstrom, Ph.D., PE, BCEE, as Editor-in-Chief for its premier international research journal, Water Environment Research (WER). He will be responsible for guiding the editorial policies of the journal and ensuring they adhere to the highest standards of qual- ity and integrity. Stenstrom’s extensive editorial background includes having authored or co-authored 160 papers in peer-reviewed journals (including 37 in WER), authored or co-authored more than 50 technical reports, presented or co-authored 279 papers at field-related conferences and seminars, developed 70 research grants and contracts, as well as serving as a WER Editor since 2001 and as Chair of the WER Board of Editorial Review since 2006. Stenstrom has received numerous water quality awards, holds five patents and is a member of WEF and many other water quality organizations. He has been a Registered Professional Civil Engineer in the State of California since 1982 and a board-certified Environmental Engineer of the American Academy of Environmental Engineers since 1989.

Does Not Compute! How to Avoid Data Loss and Maintain System Integrity

At the close of the decade…