The Orange County Convention Center in sunny Orlando, FL hosted a smaller InterBev/IBWA 2010 conference this Breck Speed (Mountain Valley Spring Co.) and Raymond Steed (CCDA Waters, LLC). Also named were 2010 IBWA Route year, with fewer exhibitors and slower foot traffic overall, a reminder that the economy hasn’t yet recovered. A few show veterans said they were surprised the show was smaller than some of the earliest events held many years previously. One participant noted that without the bottled water exhibitors, there wouldn’t have been much to see. Several larger companies set up in smaller booth dimensions, while a few held to tradition with large, open display plans (such as Aquafine Corporation and MTN Products) that allowed visitors to get a better all-around look at their offerings. Many vendors noted existing customers were anticipated more than new contacts, but the quality of those contacts was higher and potentially better than expected.

A full slate of presentations was made on stages set up on each side of the show floor, to take advantage of the opportunity to reach main-aisle traffic. Near the back and center of the floor, an expanded stage with a large viewing screen, augmented throughout with smaller screens in strategic areas, gave everyone the opportunity to keep track of who was speaking, no matter where they were located. The first day of the exhibition saw the heaviest (but still moderate) traffic that slowed significantly over the next two days. And, although people typically move down the center and right aisles first, traffic to the left side was better than expected. Prior to the exhibition hall opening for visitors each day, key presentations, classes and seminars were conveniently held in meeting rooms just outside of the hall.

Few innovations, new products
Very few new products were launched during the convention, as most exhibitors concentrated on existing customers and their current needs rather than innovation. The exception was in the ‘green’ aisle and health beverages areas. Water and energy conservation were the key words for manufacturers trying to gain share in the ever-increasing eco-friendly products category, while several high-energy beverage makers competed for visitor attention with product samples and other giveaways. Throughout the show, drawings for iPods and iPads were favored draws to many booths.

IBWA’s latest YouTube video, Bottled Water: The Big Picture (http://www.youtube.com/profile?user=TheIBWA#p/u/0/LIeR6SoQ84A) debuted on September 23. IBWA-produced videos shine a light on actions taken by bottled water companies to produce and improve safe, healthy, high-quality products, protect the environment, stand by sound science and safeguard water as a resource for future generations. “The video highlights many of the bottled water industry’s initiatives that show that bottled water companies are good corporate citizens, careful producers of quality products, as well as thoughtful stewards of the environment,” said Tom Lauria, Vice President of Communications for IBWA. “In Bottled Water: The Big Picture , consumers can see and review many facts, figures and actions taken by bottled water companies to reduce their products’ environmental footprints, conserve water as a resource, and provide refreshing bottled water as a safe, healthy, convenient beverage that people of all ages have come to rely upon, in good times and bad,” Lauria said.

WQA introduced a new, comprehensive benefits program for bottled water companies. The WQA and NTL Strategic Cooperation (between WQA and National Testing Laboratories, Ltd.) was designed to address all bottled water compliance needs. Contact Melisssa M. Tonsor, CWS-VI, at (630) 929-2527 or email her at mtonsor@wqa.org for more information on the new program.

The 2011 IBWA Convention and Tabletop Trade Show will be held in Las Vegas, NV, September 26-30, 2011, in conjunction with Pack Expo. Check for more details at www.bottledwater. org. 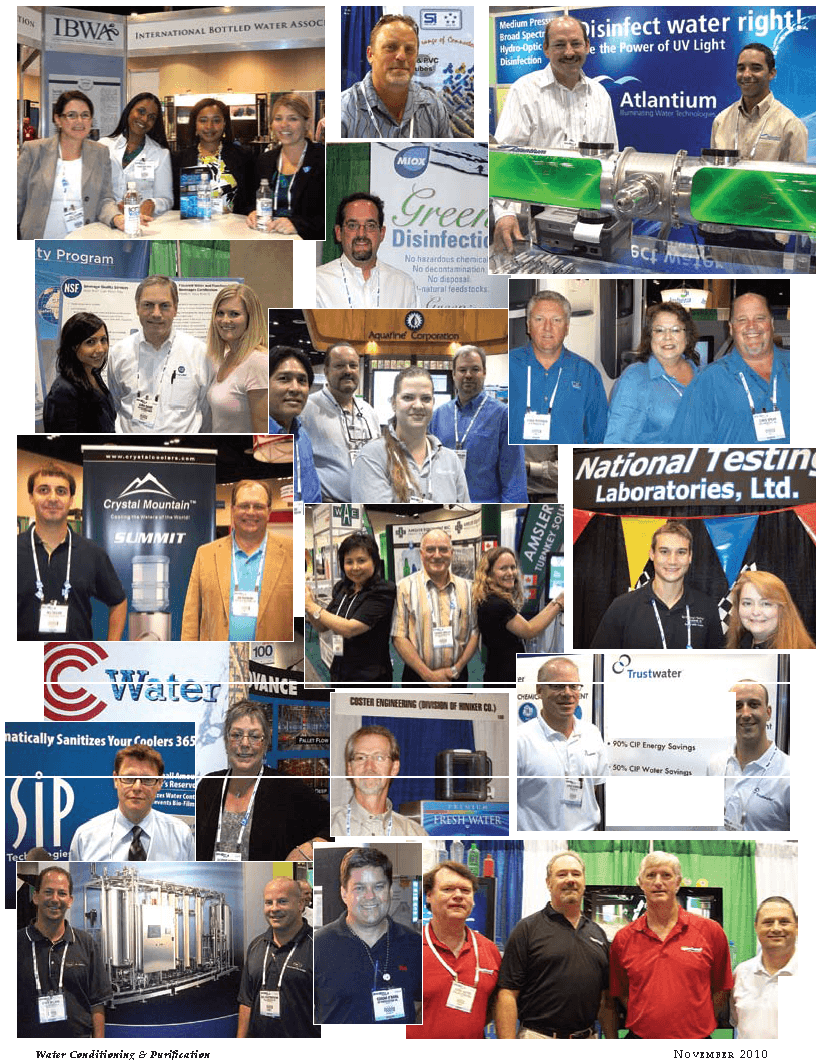