Hydrotech® announced the promotions of Brad Dureau to Western Canada Sales Representative and Brian Mills to National Sales Manager. Dureau, with more than eight years of experience in customer service across Canada, will be responsible for driving dealer growth and leading the company in that regional sales outreach. He is a Certified Water Technician and is working toward RO certification through the Canadian Water Quality Association.

Mills, with over seven years of water treatment sales, service and marketing, will be responsible for driving dealer sales growth and leading the Hydrotech and Petwa teams across Canada. Previously, he was General Manager at Fresh Water Industries and Branch Manager for eastern Canada for Good Water Warehouse. Mills joined Hydrotech in 2009 as Eastern Sales Representative, and was promptly promoted toNational Accounts Manager.

John Alksnis joined Waterite Technologies as Central Regional Manager, responsible for all aspects of sales and customer service for the company’s Prairie Filtrex division. Previously, he served for 21 years at National Energy Equipment where he advanced to Sales Manager. Alksnis has extensive dealer and national account technical sales experience in the fuel systems, pumps and flow control industry.

Rick Okaluk was promoted to Branch Supervisor, Prairie Filtrex. He has over 28 years of experience with Waterite and Filter Soft Canada, where he has been a valuable contributor in the areas of production, logistics, sales and customer service.

Pentair Residential Filtration (PRF) promoted Sam Karge to Vice President of Global Marketing and Gerard McKeown to Vice President of Sales and named Paul Devine as North America Marketing Manager. Karge will continue to lead PRF’s expanding global marketing team. In addition to his role at Pentair, Karge serves on the Water Quality Association Board of Governors, and leads the Government Relations Committee and a number of WQA Green Technology task forces.

McKeown will continue to lead the North, South and Central American sales teams to drive PRF’s sales in fast-growth markets and overall global growth strategy. He has been with Pentair Residential Filtration since June 2007 as Director of Sales for Pentair Water Treatment and the Fleck control valve business, and continued in this capacity through the 2008 Pentair and GE joint venture.

responsible for overseeing all product quality processes, inspections, documentation, clean-room certifications and training, as well as directing supplier, distributor and third-party audits. He has nearly three decades of experience and is a member and Section Chairman of the American Society for Quality. Previously, Keiser was an independent consultant for New Age. His credentials include ASQ certification as a Certified Quality Manager (CQMgr), Certified Quality Engineer (CQE), Certified Quality Auditor (CQA) and Certified Mechanical Inspector (CMI). Keiser also sits on several ASTM (American Society for Testing of Materials) committees.

Canada’s Danny Luong and Alexandre Allard, named winners of the 14th Annual Stockholm Junior Water Prize, were presented the prize by H.R.H. Crown Princess Victoria of Sweden at a ceremony at the World Water Week in Stockholm. The two young men were honored for their research on biodegradation of the plastic Polystyrene. The International Jury’s citation noted “The winning project created a novel approach to break down these plastics using microorganisms and enzymes that are cost effective and readily available. This method could greatly reduce the amount of plastics that end up in the world’s waters.” 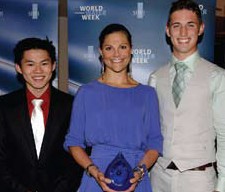 Donald A. Mahlstedt, born June 27, 1932 in Sacramento, CA, passed away August 25, 2010 in Palm Desert, CA with his family by his side. An avid fisherman, hunter and golfer, he was a competitor, lived life to the fullest and enjoyed it with family members, friends and colleagues. The native Californian had a long, successful career with Culligan International and was Vice President of Household Marketing when he retired in 1989. From 1986-87, Mahlstedt was President of the Water Quality Association. In retirement, he enjoyed his favorite pastimes while also serving on the Board of the Montecito Home Owners Association, and was a member of the Men’s Club at the Desert Willow golf resort. Mahlstedt, who was predeceased by his parents, brother and son-in-law, is survived by his wife of 58 years, Evelyn Josie (Peters), son Steven Arthur (Sandra), daughter Susan Marie, grandchildren, Michelle, Daniel and Heather, sister Grace Margaret (Leo), brothers Henry Clay (Theresa) and Gary Allen (Cheryl), and many nieces and nephews. The family wishes to thank Eisenhower Medical Center staff for all their support and care. A private memorial service will be planned for a later date to celebrate his life. The family suggests donations be made to the American Diabetes Association.

Ray D. Hinton, Sr., born March 16, 1922 in New Augusta, MS, passed away on July 31. He served with distinction in the US Army during WW II, earning many honors and awards. Hinton was captured by the Germans, held as a POW until escaping, and served in the Rhineland and central Europe until 1945. He served as Block Air Raid Warden for Civil Defense in the 1950s; with the D.A.V. Department of California Public Relations division and was involved with the Thousand Oaks Elks and Lions clubs, ETI Corral 37 and other volunteer groups. This year, Hinton was declared the oldest member of the Flotilla 7-7 Channel Islands Harbor unit of the US Coast Guard Auxiliary. Hinton began his successful sales career after the war. He had an entrepreneurial spirit, which resulted in many successful business endeavors. In 1980, he formed AquaMan Inc., became a world traveler and brought the company’s water purification units to countries all over the world. Hinton is survived by his wife, Wendy; children Karen Johnson, Debi Lee Winterhalder, Lorri Bishop, Ray Hinton, Jr. and Nan Hinton; six grandchildren, six great-grandchildren, and his first wife, Dottie Hinton Blair. A celebration of his life was held August 5 in Camarillo, CA.