Water Coolers and the NSF/ANSI Standards

The NSF/ANSI standards are intended to apply to specific categories of products. NSF/ANSI 58–Reverse osmosis drinking water treatment systems applies specifically to POU RO systems. NSF/ANSI 7–Commercial refrigerators and freezers applies to…you guessed it, commercial refrigerators and freezers. Sometimes, though, new products can be developed which essentially combine two products into one. An example might be a refrigerator with a filtration system incorporated into the water dispenser. This type of evolution, especially if it occurs after product standards have been developed, can lead to confusion and complexity in determining which standards apply and exactly how they are applied. Water coolers are a prime example of products that have evolved and been developed to incorporate other technologies that also could be considered stand-alone products, and can now fall under a number of possible different standards based on specific product features and functions.

An ever-evolving product category
Years ago, a water cooler consisted of a refrigerated reservoir with a dispenser. On top of the reservoir was a five-gallon (18.92-liter) carboy full of water that the consumer purchased from a water company and loaded into position for chilling and dispensing. Today, the spectrum of possible water-cooler configurations has evolved significantly. The familiar mainstays still play an important role in the market, but now some of these products feature both heating and cooling. Some of them are directly connected to plumbing, as opposed to being manually refilled. Some, often referred to as POU coolers, incorporate various water treatment options. Common treatment options include filtration, RO and/or ultraviolet (UV). These possible variations lead to products falling under the scope of different standards for product safety. And in fact, some of these standards are developed by completely separate expert joint committees.

The reason for applicability of different standards, and different expert committees of standards developers, is due to product evolution and the blurring of definitions of product types.

Standards for water coolers
In its original configuration as a water cooler that was manually refilled with bottled water, the water cooler is considered to be a piece of food-service equipment. Bottled water is a food regulated by FDA, and the cooler is a device that dispenses food. As such, the NSF Joint Committee on Food Equipment developed NSF/ANSI 18 for manual food and beverage dispensing equipment way back in 1972. This standard covered the category for many years, and water coolers were neatly pigeonholed into NSF/ANSI 18. During this time, standards for other products were being developed by other expert committees under the NSF auspices. The NSF Joint Committee on Drinking Water Treatment Units (DWTUs) was developing standards for POU/POE water treatment technologies. The NSF Joint Committee on Drinking Water Additives was developing NSF/ANSI 61, covering the health effects of leachable contaminants from products used in drinking water distribution systems. 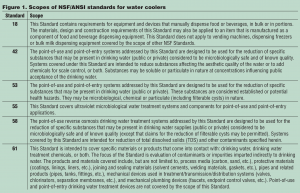 See Figure 1 for a review of the scopes of these various standards. Eventually, innovation by cooler manufacturers led to overlap in terms of applicable product standards, as the water cooler began to take on functions related to water treatment and plumbed-in water distribution systems. The result of this overlap is that different standards can apply to the products, depending on product characteristics. NSF has developed a flow chart to help navigate this landscape and determine the applicable standard or standards for a specific cooler configuration (see Figure 2). 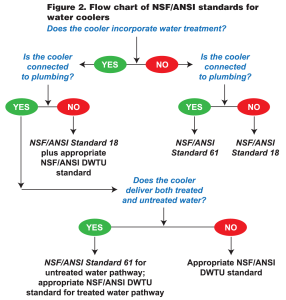 The scope of multiple standards
A close examination of Figure 2 shows that two of the endpoints include multiple standards: coolers that incorporate treatment and are not connected to plumbing, and plumbed-in coolers that dispense both treated and non-treated water. Coolers that incorporate treatment and are not connected to plumbing fall under DWTU standards for the treatment aspects and also fall under NSF/ANSI 18. One of the most important requirements of this standard for manufacturers to consider is the cleaning and sanitization requirement, which includes a test of cooler cleanability. This test involves exposing the drinking water contact surfaces of the cooler to a suspension of E. coli, cleaning the cooler according to manufacturer’s instructions, exposing the cooler’s water contact surfaces to sterile buffered water, and determining whether this water contains any E. coli after exposure to the cleaned cooler. NSF/ANSI DWTU standards have no such requirement. Conversely, DWTU standards require extraction testing for material safety, which goes a step beyond the requirements of NSF/ANSI 18. A further requirement, covered by the standards that are referenced by NSF/ANSI 18, is testing for the verification of water treatment claims. Most manufacturers offering products incorporating water treatment wish to verify their claims according to these standards.

Exception rather than the rule
In most cases, it is relatively clear which standards apply to which products. There are, however, those cases in which it is not so clear. Because water coolers have evolved over the years and taken on multiple new configurations, incorporating features previously associated only with other products, it is not entirely straightforward as to which standard(s) apply. Hopefully this discussion is helpful in clearing up any confusion related to this topic, with Figure 2 serving as a handy reference.

Rick Andrew is the Operations Manager of the NSF Drinking Water Treatment Units Program. Prior to joining NSF, his previous experience was in the area of analytical and environmental chemistry consulting. Andrew has a Bachelor’s Degree in chemistry and an MBA from the University of Michigan. He can be reached at (800) NSF-MARK or email: Andrew@nsf.org.