Reducing the (Carbon) Footprint of Municipal and Industrial Ozone Systems

Governments around the world give speeches, write legislation and dole out tax incentives, with hopes of stimulating businesses and encouraging communities to shrink their carbon footprint by embracing green technology. The ozone industry (a decade before the term carbon footprint entered the lexicon of environmental speech) began shrinking the carbon and physical footprint of ozone installations. Figure 1 shows the continuing decrease in generator feed gas requirements to produce 100 lbs./day (ppd) of ozone, illustrating the evolution of ozone generators. As ozone generator manufacturers improved their design, these units became more efficient, producing more ozone per cubic foot of gas feed. 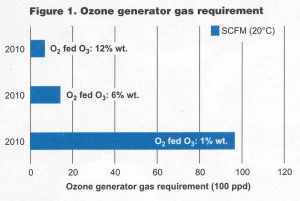 Today’s ozone generators use a fraction of the feed gas, power and floor space required by their 1980 ancestors. The genera- tor shown in Figure 2, designed to produce 400 ppd of ozone at an 11-percent wt. gas concentration, has the physical footprint of a 1980 25-ppd air-fed unit. In contrast, a 21st century 25-ppd ozone generator is now contained within a small, wall-mountable cabinet (Figure 3). Both oxygen-fed generators operate at less than half the power consumption of the air-fed ozone generators available three decades ago. 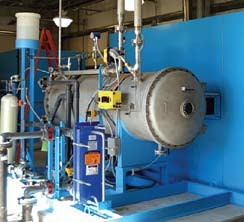 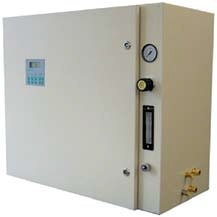 Downsizing ozone contact systems
The evolution to smaller, more efficient ozone generators, led to a revolution in ozone contacting. Modern ozone contacting systems use smaller, more compact, low-profile serpentine concrete basins and, in some installations, the basin is eliminated and replaced with a side-stream injection and degasification system. For example, when Tampa, Florida’s Lowry Park Zoo installed a new ozone generator to improve disinfection of their manatee exhibit, they also replaced their fine bubble diffusion basin, shown in Figure 4, with the small gas injection and degasification skid highlighted at the bottom of the basin photo. The change was made, in part, because the low gas flow of their new ozone generator was insufficient to work with the basin’s existing diffuser grid, and also insuffiecient to eliminate the maintenance and capital costs associated with basin cleaning and diffuser replacement. Dissolved ozone contact time, previously provided by the basin, is now provided by downstream piping.

Municipal ozone design eliminates contact basin
Municipal ozone installations have also turned away from large ozone contact basins. Figure 5 shows the side-stream injection and degasification system installed at a Toho Water Authority plant in Kissimmee, FL. Each side-stream is designed to transfer 400 ppd of ozone into a 10-mgd pressurized pipeline, to oxidized groundwater hydrogen sulfide (sulfide ion, S -2), prior to collection in a groundwater storage basin. Because the oxidation of sulfide with ozone is rapid (see Figure 6),

the design team selected dual side-stream injection and degas contact trains, eliminating the need for an atmospheric contact basin. Utilizing this contacting system in place of a basin reduced construction costs and eliminated the need to re-pressurize the stream at the back end of the contact basin. Savings in capital and energy costs were significant, resulting in a 32-week payback on the investment in the equipment.

On the first warm days of early spring, 13 office buildings in one of Chicago’s central cooling districts switched on their air conditioning and received a blast of warm, humid air. Investigation by maintenance personnel led to the disassembly of plate-and-frame heat exchangers that coupled the buildings’ air handlers to the central district’s frigid water loop, revealing extensive fouling with a white-grey biofilm on the frigid water side of the heat exchanges. Further investigation and analysis by the district’s chemical water treatment firm, indicated that the entire cooling system (the six-million-gallon frigid water tank, as well as the two-million-gallon cooling loop) was extensively fouled with biofilm and 180 mg/L of ethylene glycol . 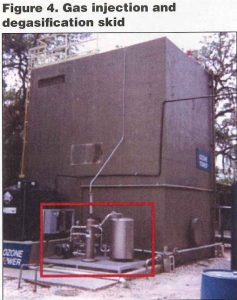 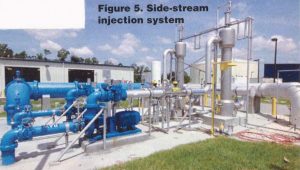 The district’s system, by design, is subject to occasion glycol leaks. Frigid water is created through the circulation of a subfreezing glycol fluid within hundreds of cooling coils sitting at the bottom of the storage tank. Ice formation on the surface of these coils is melted by returning warm water from the district buildings. Occasionally, coils become encased in ice blocks large enough to float, lifting the coil sufficiently to cause a break that discharges glycol into the frigid water system. Airborne bacteria, which enter the atmospheric frigid water tank through vents, proliferate in the presence of glycol, using it as an energy and food source, resulting bio-film formation.

Chemical representative’s response
In response to the systemic fouling of the frigid water system, the cooling district’s chemical water treatment representative recommended a traditional three-step program of biocide addition with dispersant, water-flush and corrosion inhibitor. The financial cost in chemical and water, and the hurdles to obtain a permit to dump eight million gallons of chemically treated water to sewer, encouraged the cooling district to seek an alternative solution.

Consultant recommends ozone AOP
An outside consulting firm was hired to review and confirm the findings of the chemical company and make an independent recommendation. Following their cost analysis and environmental impact study, the firm recommended utilizing an advanced oxidation process (AOP) to generate hydroxyl radicals (·OH)—a short-lived chemical species that indiscriminately breaks chemical bonds—which would completely mineralize the glycol contaminant in situ to water and carbon dioxide. The method of hydroxyl radical generation selected as the most cost effective was the irradiation of dissolved ozone with UV light (Figure 7). 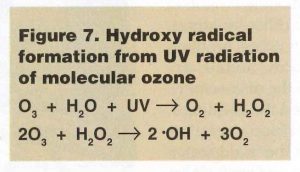 Frigid water clean up
Following the physical clean up of fouled heat exchangers, the plant energized their AOP equipment to provide a continuous batch oxidation of the frigid water system. Hydroxyl radicals, with a half-life measured in nanoseconds, oxidized glycol at the site of UV radiation. Excess ozone residual not radiated into hydroxyl radicals, provided a systemic oxidation and removal of planktonic bacteria and biofilm within the frigid water system. Following the first week of operation, water analysis showed a three- percent reduction in glycol concentration and a significant decline in the microbiological plate count. After six months of continuous operation, glycol concentrations were non-detectable and total aerobic plate counts had dropped from several million to less than 10 colonies per mL of frigid water. The dollar investment in the AOP equipment, when compared to the cost to clean, flush and treat the eight-million-gallon cooling system, was recovered in less than four months. The cooling district continues to operate their ozone system to minimize microbiological growths and energizes the UV module for AOP whenever glycol contamination is evident. 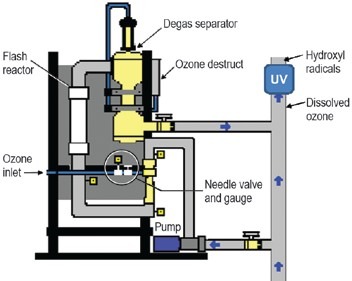 Ozone industries continual improvement
As increasing numbers of industrial and municipal facilities turn to ozone and ozone-driven AOPs as the green solution to their water and wastewater problems, the ozone industry continues to make incremental improvements in the technology of ozone generation and gas contacting. From the self-protecting ozone generating cells to the compact, energy-efficient, Pipeline Flash Reactor®, the reliability and cost of ozone systems continues to drop, making the selection of ozone technology an easy decision when designing tomorrow’s water and wastewater treatment facilities.

About the author
James ‘Jim’ Jackson is the Manager, Municipal Water and Wastewater Systems at the Mazzei Injector Company, LLC. He has a Bachelor of Science Degree in biology and has spent over three decades as a water treatment professional. Jackson began his career in the field of industrial chemical sales and consultation and has been working in the ozone water treatment industry since 1994.

About the company
Mazzei Injector Company LLC of Bakersfield, CA, was founded in 1977 as the Mazzei Injector Corporation by Angelo Mazzei. The company initially produced Venturi injectors for blending liquid fertilizers and pesticides for agricultural applications. Mazzei introduced ozone gas injection to the US water market in 1982, and has since obtained multiple US patents on equipment and methods utilized to transfer or remove gas from water and wastewater systems.